← The Troika Questions the Children’s Referendum as Being Wasteful of Public Funds
Irish Grandmother Takes On Oil Giant, Shell- A Very Human Story → 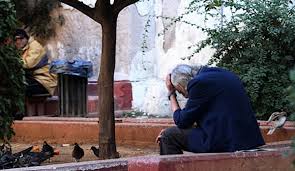 Vanna Mendaleni is a middle aged Greek woman who until now has not had vehement feelings about the crisis that has engulfed her country. But that changed when the softly spoken undertaker, closing her family-run funeral parlour, joined thousands of protesters on Thursday in a mass outpouring of fury over austerity policies that have plunged ever growing numbers of Greeks into poverty and fear.

“After three years of non-stop taxes and wage cuts it’s got to the point where nothing has been left standing,” she said drawing on a cigarette. “It’s so bad families can no longer afford to even bury their dead. Bodies lie unclaimed at public hospitals so that the local municipality can bury them.”

As Greece was brought to a grinding halt by its second general strike in less than a month, Mendaleni wanted to send a message to the Greek prime minister, Antonis Samaras, and other EU leaders meeting in Brussels……………………………………………….

via Greek poverty so bad families ‘can no longer afford to bury their dead’ | Machholz’s Blog.

via Greek poverty so bad families ‘can no longer afford to bury their dead’ | Machholz’s Blog.

← The Troika Questions the Children’s Referendum as Being Wasteful of Public Funds
Irish Grandmother Takes On Oil Giant, Shell- A Very Human Story →