← One in eight of our super-rich are tax exiles, reveals Revenue
Use stronger snooping powers against fly tipping, watchdog urges – →

Joss Whedon, the creator of Buffy the Vampire Slayer, has given a backhanded endorsement to Mitt Romney‘s presidential campaign predicting it will usher in a “zombie apocalypse”.

In a spoof video posted on YouTube, the director of The Avengers backs the Republican candidate’s programme of cuts that he says will turn the United States into “a nightmare zombie wasteland”.

Whedon, who describes himself as a liberal and a feminist and publically backs LGBT rights, including gay marriage, is seen stocking up on canned goods as if preparing for a disaster, as he explains his decision to shift his alliegiance from President Obama.

“Mitt Romney is a very different kind of candidate. One with the vision and determination to cut through the business as usual politics and finally put this country back on the path to the zombie apocalypse,” he says.

“Romney’s ready to make the deep rollbacks in healthcare, education, social services and reproductive rights that will guarantee poverty, unemployment, overpolulation disease and rioting. All crucial elements in creating a nightmare zombie wasteland.”

But it is Romney’s support for “ungoverned corporate privilege” that Whedon predicts will plunge the economy into “true insolvency and chaos”.

Musing that no one can predict whether the zombie hordes will be the old school shuffling kind or the speedier type from 28 Days Later, he says: “The 1% won’t be the very rich. It will be the very fast,”

The director adds: “Mitt’s not afraid to face a ravening grasping hoard of subhumans – because that’s how he sees poor people already.”

Whedon’s video is the latest in a series of celebrity election endorsements. Lena Dunham, creator of HBO’s Girls, appears in an Obama campaign ad in which she urges young women who are first time voters to lose their election virginity to “someone who really cares about women”.

The clip, entitled The First Time, provoked outrage from conservative commentators, who described as ‘tasteless’ and ‘disgusting’.

Actor Samuel L Jackson also stars in a rhyming bedtime story in which he tells Obama supporters to “Wake The Fuck Up” and support the Democrat campaign. 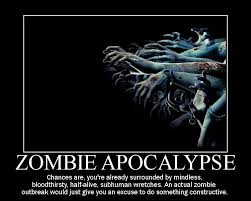 ← One in eight of our super-rich are tax exiles, reveals Revenue
Use stronger snooping powers against fly tipping, watchdog urges – →