The craziest, most nail-biting elections in U.S. history 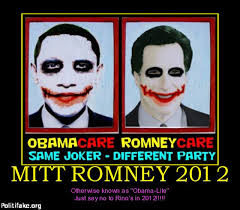 In case you haven’t been paying attention: The presidential election is shaping up to be very, very, very close. The scenarios are mind-boggling. One possibility: Mitt Romney could win the popular vote but lose what counts: the electoral college. It would be fitting revenge for Democrats still angry about the Bush-Gore debacle from 2000. The opposite could also occur: Obama, popular in voter-rich California, New York, and Illinois, could win the most votes but be edged out in the electoral college.

Perhaps the craziest of all is the possibility of Romney and Biden winning. You heard that right: a Romney-Biden administration. Imagine, if you will, that Obama and Romney wind up with an electoral college tie of 269-269 (a very slim possibility). It takes 270 to win. So what happens?

The House of Representatives decides. Under Article 12 of the Constitution, each state gets one vote, according to which party dominates that state’s House delegation. There are more Democrats in California’s House delegation, and more Republicans in Texas’, for example. And so forth.Since more state delegations in the House are controlled by Republicans, there’s no question who they’d award the presidency to: Mitt Romney.

But the VP would be picked by the Senate. And the Senate is controlled — and is likely to be controlled after election day — by the Democrats. Who would they vote for? You guessed it: Joe Biden.

Bizarre (or hilarious) as that would be, it would hardly be unprecedented. The election of 1800 was equally screwy, and the contests of 1824 and 1876 were also ones for the books. All three make the 2000 mess seem almost like a picnic. Judge for yourself:

In the early days of the republic, electors each cast not one, but two electoral votes for president. Adding to the confusion: There was no such thing as “election day” as we know it now. States voted whenever they felt like it over a period running from April to October. It was a long, drawn-out, and often confusing process.

The republic was just 24 years old when Thomas Jefferson and Aaron Burr squared off against President John Adams and Charles Pickney. Yet electors gave both Jefferson and Burr — who were on the same ticket — 73 electoral votes apiece. Adams got 65, and Pickney 64.

So what do you do in the event of a tie? The Constitution said the House of Representatives would decide. Since Jefferson and Burr got the most electoral votes, the former running mates suddenly became rivals. Voting went on for days, with ballot after ballot. Finally, after 36 ballots, the tie was broken: Thomas Jefferson was declared the president-elect. Aaron Burr was declared vice president. But Jefferson, at this point, didn’t trust Burr and gave him nothing to do.

In an unrelated matter, by the way, Burr later shot and killed Alexander Hamilton, the first Treasury secretary, in a duel.

Unfortunately for “Old Hickory,” as Jackson was known, there were two other men on the presidential ballot in 1824: William Crawford of Georgia, who received 41 electoral votes, and Henry Clay of Kentucky, who got 37. Because the four men received a combined 271 electoral votes, Jackson had a plurality but not a majority. He needed 136, but had only 99.

Once again, it was up to the House. Because the 12th Amendment to the Constitution said that only the top three presidential candidates could be considered, Clay was out. He threw his support to Adams, and on Feb. 9, 1825, the House gave Adams 138 electoral votes. John Quincy Adams — loser of both the popular vote and, at first, the electoral college — would become the sixth president of the United States.

Now, a story like this can’t be told without a little dirt. After all, it’s presidential politics. Just before the results of the House election became public, an anonymous letter appeared in a Philadelphia newspaper. Said to be from a member of Congress, it accused Clay of selling his support to Adams if Adams made Clay secretary of State. Jackson and his supporters were outraged over what they called “the corrupt bargain.”

Clay did indeed become secretary of State in the Adams administration.

This is also a cautionary tale. You’ve got to be careful what you wish for. John Quincy Adams hated being president. He called it the “four most miserable years of my life.” One reason: He was hounded at every turn by Jackson and his supporters. In 1828, both would clash again when Adams sought re-election. This time, Jackson got his revenge, crushing Adams in both the popular vote and winning a majority of the electoral college. Adams later spent 17 years in Congress — the only president to do so after leaving the White House.

It happened again: A candidate lost after getting the most popular votes and the most electoral votes on election day.

In all three southern states, it looked like Tilden won the popular vote. But there were allegations of fraud (ink-smeared ballots and bribery) and voter intimidation. Chaos ensued. In Florida, for example, the Republicans said they won by 922 votes. Democrats say they did — by 94 votes.

Meantime, in Oregon, both Democrats and Republicans agreed that Hayes won the state. But when the Democratic governor found out one Republican member of the electoral college was a federal worker (a postmaster) and ineligible to serve, he replaced him with a Democrat. The Republican elector promptly resigned his post office job and said that as a private citizen, he would cast his electoral college vote for Hayes.

By the way, there’s absolutely nothing in the Constitution saying this is how an election standoff was to be resolved. After much maneuvering, the commission voted along party lines — 8 to 7 — to award the disputed electoral votes, and the presidency, to Hayes.

But it still wasn’t over. Democrats threatened to filibuster the counting of electoral votes to keep Hayes from winning. In 1877 — just weeks before inauguration day — Democrats gave in, with one big string attached. Republicans must agree, they said, to withdraw all federal troops from the South. This was just a decade after the civil war. The GOP agreed — and thus the Compromise of 1877.

And you thought Bush-Gore was messy…

via The craziest, most nail-biting elections in U.S. history – The Week.

via The craziest, most nail-biting elections in U.S. history – The Week.