IRELAND’S BIGGEST telecoms company, Eircom, plans to shed 2,000 jobs over the next 18 months in an effort to save €100 million a year.

This is twice the level of redundancies previously indicated by the company, and represents 35 per cent of its 5,700-strong workforce. The company will initially ask staff to opt for voluntary redundancy.

It represents further bad news for the Government on the employment front and comes just a day after it was reported that State-owned An Post is seeking to cut up to 1,500 full-time positions by 2016.

Minister for Communications Pat Rabbitte said it was “regrettable that further restructuring seems inevitable” at Eircom. “But the commitment to invest €1.5 billion to upgrade the network is welcome.”

Eircom has been in an almost permanent state of restructuring in recent years as it has sought to modernise and address legacy costs from its days as a State-owned entity.

It has also struggled under the burden of massive debts put on the business by a succession of private-sector owners.

Eircom’s workforce has been reduced by 1,500 over the past three years. The company only emerged from an examinership process earlier this year after its lenders agreed to cut their gross debts from €4 billion to €2.35 billion while taking control of the group. 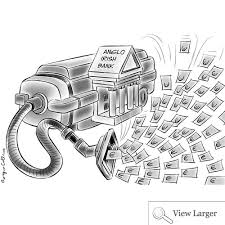 Alan Dukes: Cost of Anglo wind-down may be closer to €25bn, lower than expected

IRISH Bank Resolution Corporation (IBRC) chairman Alan Dukes said today he is hopeful that the cost of the wind-down of the former Anglo Irish Bank will be closer to €25bn and lower than previously estimated.

However, he added that the lower cost was predicated the Irish and British property markets not worsening any further.

He told an Oireachtas committee: “We remain reasonably hopeful that the cost of the operation will be closer to €25bn rather than the range of €29-€34bn estimated in September of 2010.

“This of course highly contingent on what happens to property markets here and in the United Kingdom.”

He said it may be possible to wind-down the lender faster than expected but he also said the bank is “extremely vulnerable” to what happens in the eurozone and deterioration in property markets.

Mr Dukes added that he is not involved in current discussions between Ireland and European authorities over a restructuring of the Anglo promissory notes or IOUs.

He also said he did not agree with recent comments from Central Bank executive Fiona Muldoon that the banks are not moving fast enough to deal with mortgage problems.

His comments came as new figures from the Central Bank showed that loans to Irish households fell 3.7pc in the year ending September 2012.

The figures were relatively unchanged on the previous month and fell €88m in September.

Lending for new houses was 2pc lower on an annual basis in September while loans for other purposes declined by 8.4pc.

AIB to write off some mortgage debts but no blanket amnesty

THE REPUBLIC’S largest mortgage lender, AIB, will write off the debts of distressed mortgage holders where it finds they cannot afford to repay them, but has again ruled out blanket debt forgiveness.

The bank indicated that about 10,000 of the most distressed mortgage customers will be considered for long-term fixes, including the potential write-off of debts.

Similar relief measures are being considered by the other banks as the Central Bank has publicly criticised the banks for failing to tackle the mortgage crisis.

In his first appearance at an Oireachtas committee, AIB chief executive David Duffy warned against widespread debt forgiveness when most customers were repaying their mortgages and did not get into financial trouble by investing heavily in property. AIB would be in “very dangerous territory” where people who made “mad decisions” should get part of their debt “magically” waived, he told the Committee on Finance, Public Expenditure and Reform.

The State-controlled bank, which received a €21 billion public bailout, was instead looking at distressed borrowers case by case to assess what they could afford over their lifetimes and would then write off any debt they could not afford.

Mr Duffy said many struggling borrowers had a home loan, debt on a small business and invested in buy-to-let properties or other real estate through partnerships, family or other relationships. The bank was “disentangling” these debts while trying to keep people in their homes.