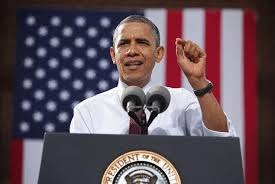 FIVE DAYS before the presidential election, president Barack Obama’s campaign has been cheered by a new poll showing their candidate ahead in Florida, Ohio and Virginia, which hold the lion’s share of electoral college votes among swing states.

“At this time next week, president Obama will have been re-elected for a second term and we can all get some sleep,” Obama campaign manager Jim Messina told reporters in a conference call. “The bottom line is we have the math and they have the myths. Whether we are talking about getting out the vote or bringing down the deficit, our numbers add up.”

Obama will resume campaigning in Wisconsin, Nevada and Colorado today after devoting the past three days to dealing with Hurricane Sandy.

The poll, conducted by Quinnipiac University for the New York Times and CBS, found Obama five points ahead in Ohio – without which no Republican has ever won the presidency – at 50 per cent to 45 per cent for Romney. But Obama’s lead in Florida is tiny, at 48 to 47 per cent, and hardly better in Virginia, at 49 to 47 per cent. Republican challenger Mitt Romney has a 30-point lead in Florida and Ohio among white, working-class voters.

Obama’s senior adviser David Axelrod cited three “desperate moves” by the Romney campaign. “The most notable are the automobile ads in Ohio,” he said, referring to misleading advertisements that give the impression that Chrysler, which benefited from the administration’s $80-billion bailout, is shipping jobs to China.

“In keeping with Halloween, governor Romney has decided to masquerade as a champion of the American auto industry, an industry he was willing to let go bankrupt,” Axelrod said.

The second sign of desperation, he said, was Romney advertisements in Pennsylvania “reprising the discredited welfare-to-work charge from over the summer”. The Romney campaign falsely claimed Obama rescinded a Clinton-era requirement that welfare recipients seek employment.

The third sign was a Romney campaign thrust into “three states they simply are not going to win: Michigan, Pennsylvania and Minnesota”, Axelrod said.

The Obama camp believes its greatest advantage is its “ground game” – the network of local campaign offices and workers it retained from the 2008 campaign and fortified over the past year, while Romney was fighting challenges from other Republicans. Messina quoted a Republican memorandum from Florida that said: “The Democratic turnout machine is cleaning our clocks.”

Democrats “have a significant early vote advantage in battlegrounds from North Carolina to Nevada,” Messina said. “Governor Romney wants you to think he has momentum. That’s a hard case to make when you haven’t put a single battleground state away.”

The Romney campaign was “at a break-glass moment. They understand their path no longer gets them to 270 (the electoral college votes required to win).”

New Jersey governor Chris Christie, who yesterday guided Obama through devastated parts of his state, called the president’s handling of Hurricane Sandy “outstanding”. “I don’t give a damn about election day after what has happened here,” he said. Christie delivered the keynote address at the convention that nominated Romney.

Romney’s performance lifting boxes of tins for hurricane victims on Tuesday was mocked by liberal media, who pointed out that the Red Cross has asked for donations of money, not goods. Romney ignored repeated questions from journalists about whether he still wants to dismantle the federal disaster relief agency Fema, which is co-ordinating relief efforts.