Is there about to be a stampede for the door by foreign-owned Irish banks? 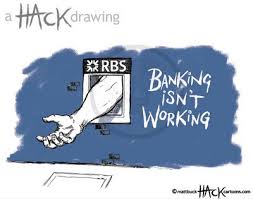 During the Christmas 2004 tsunami in Asia, it was remarkable that there were so few mass animal deaths, and there is a long-held belief that animals can sense disaster ahead of human beings.  Likewise, banks with their fingers on the pulses of households’ and businesses’ financial performance and prospects might be expected to have an unusually perceptive grasp on the economy; with a pattern emerging of banks exiting or considering exiting the State, this doesn’t augur well for our medium term economic prospects.

Next week we should get the Q3, 2012 results from Belgian-owned KBC bank which just a few weeks ago was strongly protesting that it didn’t have plans to exit from the Irish market. Industry speculation however is that KBC has had a lousy Q3,2012 in the Irish market and that its residential mortgage book in particular continues to deteriorate at an alarming rate. Insiders thought there was something of the bank “protestething” just a little too much recently, and that a partial or total exit may also be on the cards. The single reference to Ireland in KBC’s presentation to analysts on 8thOctober 2012 was noted with curiosity by some.

Towards the end of last week, there was unverified speculation in Dublin that Ulster Bank, owned by troubled British banking giant, Royal Bank of Scotland was considering an exit from the Irish market. Ulster Bank has already been flogging loan portfolios in an obvious bid to reduce its exposure in the Irish market, but the fear is that a more substantial action is afoot. Nothing came of the speculation, but the bank’s actions will be scrutinised closely in future, to see if a more radical exit is on the cards.

Today however, we actually get a definite announcement. Danske Bank, whose local bank brands are called Northern Bank in Northern Ireland and National Irish Bank in (the Republic of) Ireland, has published its Q3,2012 results which continue to show severe deterioration in its Irish loan book, though the pace of decline has eased. Danske has announced today that “the non-core Ireland portfolio will be divested” Looking through the Danske Irish financial statement for Q3, 2012 it looks as if there’s about €3bn of non-core lending in Ireland plus €2.5bn of core in the Republic and €4.8bn in Northern Ireland. There are €1bn of non-core deposits and €2bn of core deposits in the Republic and €5bn in Northern Ireland. So today’s announcement represents a major disposal though we await details of how and when the disposal will be made.

Bank of Scotland (Ireland) and Halifax are already in the process of running down their Irish loans, partly using the asset manager Certus. This follows the announcement of the exit from the Irish market of the two Lloyds-owned units in 2010.

ACC Bank, the Irish unit of Dutch-owned Rabobank said in June 2012 that it had no plans to exit the Irish market, this despite running up four years of losses, and needing a bailout of €930m from its parent operation in Holland.

We will shortly get mortgage arrears data from the Central Bank for Q3,2012 and for the first time should get detailed information on Buy-To-Let mortgages alongside the traditional data on Owner-Occupier mortgages. BTL is especially expected to show signs of crisis, the picture with Owner-Occupier mortgages is less clear with a slowing-down in the rate of deterioration recorded in Q1 and Q2, 2012. Commercial property continues to decline at an annualised 10% and it may be too early to claim the residential market is stabilising. Unemployment remains elevated at close to 15% and economic forecasts for 2012 and 2013 are trending downwards.

Maybe some banks do have a sixth sense.