Is this the last sting of a dying wasp? 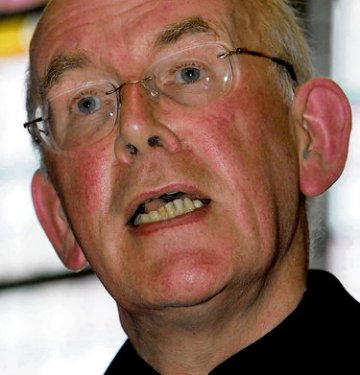 Their lordships are not for turning on this one. Anyone who thought that, cowed by almost two decades of scandal and with such wounded leadership, the Catholic bishops would now be grateful to ignore the abortion issue and simply slink off into that good night was sorely mistaken. It is not so. But who would have expected them to take to the streets?

It is unprecedented for a group of Irish bishops to take part in a street protest. And with the support of their colleagues on the Irish Episcopal Conference. But that’s what happened on Tuesday night outside Leinster House.

Between them they represented the four metropolitan sees in Ireland – Armagh, Dublin, Cashel and Tuam – and were led by Archbishop Neary, whose Tuam archdiocese includes Castlebar, Co Mayo, of which the archbishop is a native, as is Taoiseach Enda Kenny.

It is not as if there wasn’t ample warning of a vigorous response from the bishops.

Last August, Catholic primate Cardinal Seán Brady threw down the gauntlet to the Oireachtas on this issue. Then, anticipating publication of recommendations by the expert group on abortion, he spoke to the Edmund Rice Summer School in Waterford.

He said it was “important as a church that we prepare with others to defend the equal right to life of a mother and child against any effort to introduce abortion to a country which is one of the safest places in the world for mothers who are expecting a child”.

“The recent judgment of the European Court of Human Rights on A, B and C v Ireland did not oblige the Irish Government to legislate for any form of abortion in Ireland.

“I believe any attempt to do so, even by way of a ministerial directive, will be vigorously and comprehensively opposed by many.”

That was two months before Savita Halappanavar’s death, since then we have been repeatedly assured Ireland “is one of the safest places in the world for mothers who are expecting a child”.

It was three months before the expert group on abortion published its proposals, which Bishop Leo O’Reilly described yesterday on RTÉ as “somewhat flawed”. He added that “three of the four proposals by the expert group include abortion, and that is not something that is acceptable in Catholic teaching, as everybody knows”.

In an RTÉ interview subsequent to his Edmund Rice address, Cardinal Brady went on to make it very clear what the bishops intended to do on the abortion issue.

If the Government decided to legalise abortions in the State, he said, “we would have a media campaign, we would be lobbying public representatives and also hope to write a pastoral letter on this situation, setting forth the argument which we have always held and providing resources to priests to preach on this topic in the pulpit”.

Their campaign has continued apace. In October Ireland’s Catholic bishops called on “all who believe in the equal dignity and beauty of every human life” to “join us in calling on our public representatives to respect the humanity and life of children in the womb and to reject abortion”.

A special pastoral message was read and distributed in all Catholic parishes on the island beginning a month of prayer on the theme “Choose life!”

One Minister who publicly recognised the significance of the cardinal’s words last August was Minister for Communications, Energy and Natural Resources Pat Rabbitte. In response he said a direct involvement by the Catholic Church in political campaigning on abortion would be a backward step for Ireland.

“I would be somewhat surprised at the cardinal’s reference to lobbying and engaging with, canvassing public representatives and so on on the matter,” he said.

“I don’t have any objection to any of the churches stating its position and making it clear but I think it would be a retrogressive step if we were to go back to the days of the Catholic Church dictating to elected public representatives how [they] should address an issue that a very large section of our society believes that governments in the past ought to already have done,” he said.

Well, it is happening.

Some might have thought that Ireland’s moral civil wars – fought so ferociously through the 1970s, 1980s and 1990s, over issues such as contraception, homosexuality, divorce and, above all, abortion – were over. They continue.

This, however, is shaping up to be the mother of all those battles.

via Bishops open fire in what promises to be mother of all battles on abortion – The Irish Times – Thu, Dec 06, 2012.

via Bishops open fire in what promises to be mother of all battles on abortion – The Irish Times – Thu, Dec 06, 2012.