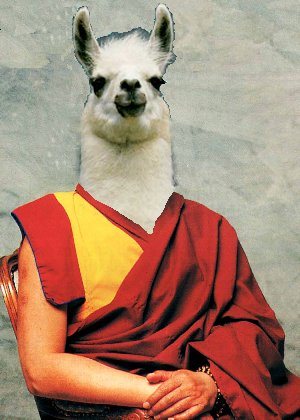 As a toddler, he was put on a throne and worshipped by monks who treated him like a god. But the boy chosen by the Dalai Lama as a reincarnation of a spiritual leader has caused consternation – and some embarrassment – for Tibetan Buddhists by turning his back on the order that had such high hopes for him.

Instead of leading a monastic life, Osel Hita Torres now sports baggy trousers and long hair, and is more likely to quote Jimi Hendrix than Buddha.

Yesterday he bemoaned the misery of a youth deprived of television, football and girls. Movies were also forbidden – except for a sanctioned screening of The Golden Child starring Eddie Murphy, about a kidnapped child lama with magical powers. “I never felt like that boy,” he said.

“They took me away from my family and stuck me in a medieval situation in which I suffered a great deal,” stated Torres, who also claims to possess amazing past life memories of eating hay and sifting through mounds of shit for regurgitated food.

“It took my first twenty years in this life just getting used to bipedal walking. I think the Dalai Lama was impressed by my non-verbal demeanor and my apparent sense of disinterest in my fellow man. I guess he mistook this for the characteristics of a highly evolved prick”.

It is still unclear in the Tibetan Bhuddist hierarchy whether Mr. Torres will be allowed to skip several lower primate lifetimes and reincarnate in his next life as a man, or if he will have to trod the long arduous assent into the more highly evolved bipedal ape species one murderous, pitiful, violent and pointless step at a time.

“I love being human,” Says Torres, briefly forgetting to put his tongue back inside his lips and slowly wagging his head back and forth. “I sit around all day and people feed me. I wish I wasn’t chosen to be a monk though. But because I tampered with the Akashic records, my destiny as a Lama was sealed due only to a single letter change.”

“I think being human is closer to God than being a Llama”, says Osel, staring out over a mountainous cliff, watching his icy breath dissipate to be one with everything around him. “Recently I have been reading the Bible and I am thinking about converting to Christianity”.

Osel seems to be undaunted by the switching of religions and how this will affect His Holiness.

“being human is great, why should I care what turtle face wants? I can piss and shit on anything I want and my quest for dick, pussy, status, power and the nepotistic protection of my offspring and family are easily concealed by my extraordinary newfound sense of self-deception and interpersonal manipulation.” He smiles widely and guffaws with his necked crooned skyward. The laugh seems like an involuntary eruption of mirth. “I couldn’t ever get away with that shit before!”

He is now studying film in Madrid and has denounced the Buddhist order that elevated him to guru status. “They took me away from my family and stuck me in a medieval situation in which I suffered a great deal,” said Torres, 24, describing how he was whisked from obscurity in Granada to a monastery in southern India. “It was like living a lie,” he told the Spanish newspaper El Mundo. Despite his rebelliousness, he is still known as Lama Tenzin Osel Rinpoche and revered by the Buddhist community. A prayer for his “long life” still adorns the website of the Foundation to Preserve the Mahayana Tradition, which has 130 centres around the world. The website features a biography of the renegade guru that gushes about his peaceful, meditative countenance as a baby. In Tibetan Buddhism, a lama is one of a lineage of reincarnated spiritual leaders, the most famous of which is the Dalai Lama.

According to the foundation biography, another leader suspected Torres was the reincarnation of the recently deceased Lama Yeshe when he was only five months old. In 1986, at 14 months, his parents took him to see the Dalai Lama in Dharamsala, India. The toddler was chosen out of nine other candidates and eventually “enthroned”.

At six, he was allowed to socialise only with other reincarnated souls – though for a time he said he lived next to the actor Richard Gere‘s cabin.

By 18, he had never seen couples kiss. His first disco experience was a shock. “I was amazed to watch everyone dance. What were all those people doing, bouncing, stuck to one another, enclosed in a box full of smoke?”

via Boy chosen by Dalai Lama as reincarnation of spiritual leader turns back on Buddhist order | World news | The Guardian.

via Boy chosen by Dalai Lama as reincarnation of spiritual leader turns back on Buddhist order | World news | The Guardian.