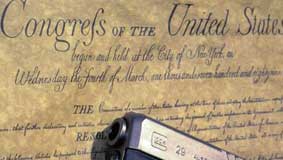 With yet another murderous rampage being carried out by a highly intelligent loner, a pro-gun group is calling for firearms to only be sold to people who can prove they’re gregarious idiots.

Alan Gottlieb of the Second Amendment Foundation believes guns can be a very positive part of people’s lives, as long as the owners are sociable and stupid.

All 650,000 members of the club currently qualify.

“Guns don’t kill people, clever weirdos do”, insisted Gottlieb. “A few well-balanced jocks with assault weapons could have prevented this tragedy, even at primary school level.”

For Gottlieb, the issue of gun ownership can be a conflicting one, especially when SIG-Sauer semi-automatics both look ‘pretty cool’ and yet at the same time can be quite hard to spell.

“It’s a complex issue, if you’re not very bright”, said Gottlieb. “How do you begin to find a compromise between the words on an old bit of paper, and not waking to find all the children are dead?”

The Foundation has drafted a test for potential gun owners, with some really hard sums written on the back of an invite to a social occasion. “If you do the maths, you’d have to say ‘no’ to gun ownership”, explained Gottlieb.

“But if you rock up to our range without giving it any thought at all, we’ll give you a machine gun, an assault rifle or a flame thrower.”

Gottlieb’s critics say banning guns could reduce the number of people killed by gun owners, but he didn’t understand the argument, even after someone drew diagrams.

Others have claimed that treating disturbed youths with doctors can be more effective than showing them how to use a high-powered rifle.

“When I get confused, I find the best thing to do is to go off alone in the woods and shoot stuff. You should try it, it’s very therapeutic.”

via Second Amendment group suggests guns only be sold to ‘sociable morons’.

via Second Amendment group suggests guns only be sold to ‘sociable morons’.