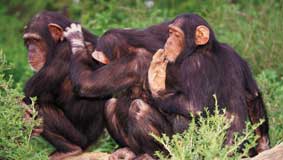 Researchers from the fiscal chimp center at Emory University have failed to find capitalism coursing through the brains of our ancestors. Goldman Sachs says this is good news and are in the process of creating a  credit default swap to cover all monkey business

In an experiment involving a banana and a top corporate lawyer, the apes were given the opportunity to invest their fruit, or starve each other to death.

“The results were disappointing”, said Dr Hillary Temple. “Not one of our subjects showed any ambition to own all of the bananas.”

“It’s almost as if they didn’t hate their fellow chimp.”

“Some of them went so far as to share their curved food portfolio with other hungry little apes, without so much as a punitive contract in place.”

“I’m beginning to think we descended from a bunch of pinko liberals.”

Temple also wanted to find out what chimps made of patent law and restrictive trade agreements, but was disappointed to find the best they could manage was a makeshift hat.

“Not a single chimp filed a lawsuit for infringing copyright on peeling bananas with your feet”, sighed Temple. “In fact some of them threw their own faeces at the lawyer.”

The team has concluded that chimps are a bunch of dangerous communists at best, and are looking elsewhere for economic theory in nature.

“The ebola virus looks promising, it eats the host in the face and then keeps going until there’s nothing left”, said Temple.

“It’s incredible to think that low forms of  life have a better grasp of consumer capitalism.”

via US scientists discover chimps lack ‘innate sense of capitalism’.

via US scientists discover chimps lack ‘innate sense of capitalism’.