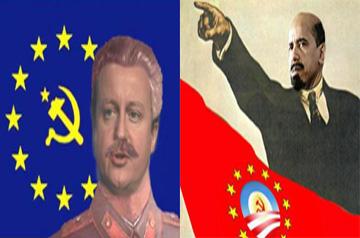 WASHINGTON DC – USA – Comrade Cameron has been warned by his Soviet superior, Comrade Obama that he must accept the conditions of the EU with regards to the EU Sovietisation of the former United Kingdom.

“As I am bringing the collectivist soviet system to the former United States, I want you to do the same in the former United Kingdom and accept complete surrender to the EU soviet state. I get my orders from China, you get your orders from me and the EU. Once I have destroyed America from the inside, then there will be full integration of the one world government and economy,” Comrade Obama told Comrade Cameron yesterday during a conference call.

As a result of this communique there have been a number of articles from the controlled press decrying any movement away from the EU by the UK. The articles have all appeared in different publications from different sources all spewing out the same pro-EU propaganda that the people will naturally ingest without question.

“The EU is a key tool in total assimilation wherein it takes nation states, strips them of all sovereignty and destroys all freedom, individuality and democracy. It then spits out the country as a base shell moulded as an EU sector. The EU is a totalitarian state which will soon reveal itself as the Fourth Reich mixed up in an East German Stasi soup. The horrific nature of the EU is one of complete subjugation to a system that will bring tyranny to millions of people within its borders, as the controls will be drip fed slowly until there is no freedom left for its imprisoned populations,” an anti-EU supporter said on a BBC website bulletin board, before being deleted.

When the goose stepping EU soldiers are marching through British streets, maybe then some people may wake up to the EU threat. Until then, do carry on watching your Come Dancing and forget about what is really going on.

Remember how long it took people to listen to Churchill about the Nazi threat before World War II started, and you can see the exact same thing is happening now as the EU is gaining strength and assimilating more and more countries with its economic might, soon to be military might as well.