Galway S2S and Rossport Solidarity Camp members challenged the head of SEPIL, Michael Crothers, to answer for the crimes Shell has commited.

The Managing Director of Shell E&P Ireland, Michael Crothers, came to the NUI Galway Energy Night on the evening of Feb 28th. He was part of a PR delegation that promoted Shell’s progress in attempting to bring the Corrib Gas Project on-stream. A group of local Galway Shelltosea activists and Rossport Solidarity Camp members with ethical objections to the Gas Project staged a peaceful protest to express their concerns. Shell has been allowed to remove 125,000 tonnes of peat bog from an area directly including, and surrounded by, EU Special Areas of Conservation. The Irish government has failed in its legal duty to protect the natural habitats upon which Shell are currently working. In relation to the negative environmental consequences of the CGP, Crother’s response was to praise Shell’s environmental record as “exemplary”. 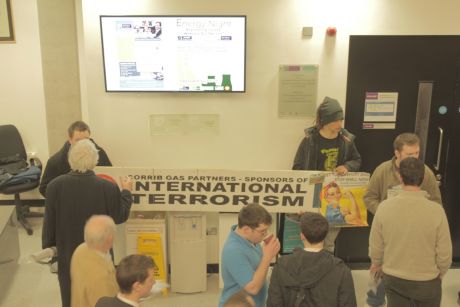 Protesters raised their banners in solidarity with all of the global communities that have been, and still are, subject to Shell’s immoral and illegal activities, be they environmental, social or economic. Shell and partners have been subjecting the community of Erris, North County Mayo, to the building of an experimental & highly dangerous gas pipeline for the past 13 year experimental.

During a Q&A session, one person asked Crother’s about Shell’s activities in Nigeria. It has been well documented that in the mid 1990’s Shell colluded with the Nigerian Military in the murder of environmental activist Ken Saro-Wiwa and eight other activists? Crothers was asked to comment on a 2009 court settlement in New York; relating to the murder of the Saro-Wiwa, in which Shell agreed to pay $15.5m in compensation to the relatives of Ken Saro-Wiwa. To many objective observers, this was a clear admission by the Shell corporation that it is guilty of murder and human right violations? Crothers claimed to be unaware of what has happened to Saro-Wiwa in Nigeria and wouldn’t, even though the case made international headlines at the time. The protest was successful because it prevented SEPIL from presenting an inaccurate and in many cases, totally untrue, account of Shell’s activities in Ireland and in other parts of the world. 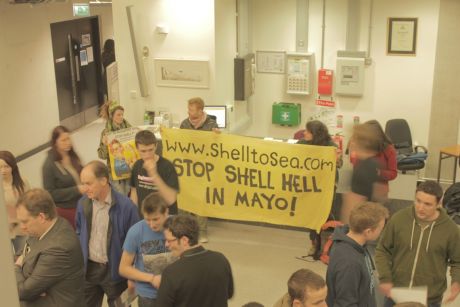 via Resistance to Shell in Galway City – Indymedia Ireland.

via Resistance to Shell in Galway City – Indymedia Ireland.