Over the past weekend, in the sleepy rural village of Atenas, Costa Rica, there was a weekend-long celebration in the town square.

But instead of the normal summer festivals, or an observance of the Lenten season for this predominantly Catholic nation, citizens were gathering for a different reason: Their canton (akin to a county in the United States) had just voted against the use of genetically modified seeds.

The recent backlash against GMOs and the company that predominantly sells them, Monsanto (NYSE: MON  ) , began in late 2012, when a subsidiary of the company requested permission to plant about 5 acres of corn with genetically modified seeds produced by Monsanto.

The request led to a rash of demonstrations across the country, but on Jan. 22, the Costa Rican Ministry of Science and Technology granted the request.

This isn’t the first time such a request has been granted, as the country has already allowed about 1,100 acres of genetically modified cotton, soybeans, bananas, and pineapples to grow within its borders.

It’s important to note two things: 1,100 acres represents an infinitesimal percentage of total land available for farming in Costa Rica; and none of the genetically modified products are allowed to be consumed or marketed within the country — they are for producing seeds to export or for research purposes only.

As soon as word got out that Monsanto had been granted this exception, several groups began weighing in against the company. Besides environmental groups, the agricultural and biology departments at the University of Costa Rica, as well as the Costa Rican Agronomy Engineers’ Association, wrote letters warning of the inherent dangers of using seeds provided not by nature, but by scientists working in labs.

Many concerned parties began to mobilize to squash any attempt to bring genetically modified seeds into the country before a steady movement in that direction materialized.

Local cantons began voting in earnest to let their voice — and, if obeyed, their laws — be known. In fact, on the very same day Monsanto was granted its permission, the municipalities of Aserri, San Jose, and San Rafael de Heredia announced that GMOs would not be allowed in their soil.

Since then, the response has been clear and direct. Of the country’s 81 cantons, 60% — or 49 in total — have voted to make it illegal to plant GMOs within the Canton lines. Keep in mind that most of this has transpired in just the past three months!

What it means for Fools

Obviously, not every country is going to have as direct a reaction to Monsanto — or any other company pushing GMOs — as Costa Rica has. And also keep in mind that Costa Rica’s market potential pales in comparison with that of the United States and other nations around the world.

At the same time, investors need to take note that campaigns against the company — and mounting evidence that its products devastate local ecosystems — don’t seem to be going anywhere.

The movement to eliminate food produced in laboratories, rather than springing up from the earth, has been gaining steady steam for a while now. That helps explain why companies that focus on providing food with responsible sourcing and practices that are environmentally healthy — particularly organic grocer Whole Foods (NASDAQ: WFM  ) , and organic distributors Hain Celestial (NASDAQ: HAIN  ) and United Natural Foods (NASDAQ: UNFI  ) — have been increasing rapidly since 2009. 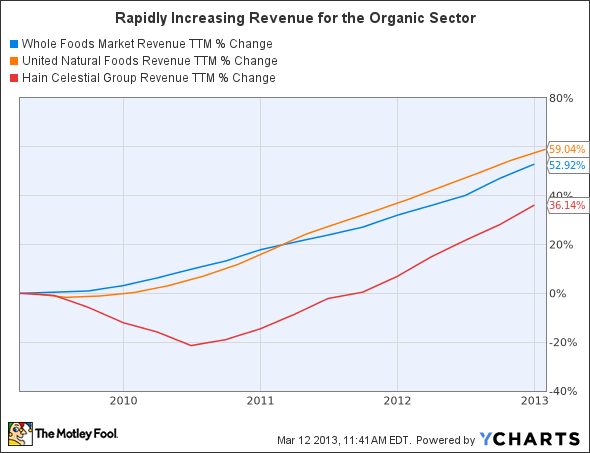 And these businesses are mostly concentrated in North America. Like Costa Rica, others outside our borders are taking stands.

Bhutan, a country that measures Gross National Happiness instead of the usual gross domestic product, recently announced that it will be aiming for 100% of its food to be produced organically.

In Hungary, officials destroyed 2,500 acres of corn grown with Monsanto’s GMO seeds, after they were banned from use in the country.

Peru has banned GMO seeds for the coming decade.

Of course, like Costa Rica, these countries represent the tiniest of drops in the bucket. Only time will tell if these movements make their way back to the States.

In the meantime, investors and consumers of food alike (i.e., all of us) would be well served to stay up to date on the consequences — if any — of planting or consuming genetically modified food.