How did God impregnate the Virgin Mary? 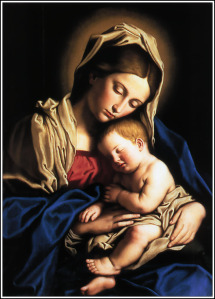 The virgin birth of God into the world is perhaps the most amazing event ever described in any spiritual document. The notion of a virgin birth from an “immaculate conception” is so unfathomable to the human mind that it has caused many serious thinking men and woman to mock such a thing and embrace atheism or scientific secularism. Perhaps I can help offer a way to understand the Lord’s Advent that is more acceptable to human reasoning.

I will have to approach this topic from several directions. Each direction will be extremely challenging—especially within the limitations of a blog post.

Quantum mechanics suggests that nothing exists alone. This is also referred to as quantum entanglement. All finite things rely on something greater than themselves. If you follow the logical trajectory of such thinking you will have to conclude that finite things have their origin in the infinite—since anything limited must have come from something greater or less limited, and that ultimately, from something even greater and less limited as well (ad infinitum).

If you accept the premise that God is Infinite, then God is everywhere and sustains all things (theism). So the Lord God is equally and fully present in the ovary and eggs of a human female as with a giant galaxy containing billions of stars. However, according to scientist/theologian Emanuel Swedenborg, God’s Infinite activity is manifested in finite things according to their receptivity.

What does receptivity mean?

Swedenborg claimed that God’s creative spiritual action flows into (impregnates) matter with dynamic forms of usefulness. Physical matter simply provides a matrix for utility to emerge into actual form with greater and greater complexity (evolutionary process). Since Mary’s ovum is a matrix for human life, it already possessed the complexity to be more receptive to God’s living influence than other worldly structures. But even more importantly, since God focused on a particular female gamete, it would serve as a recipient form for the greatest of all uses—the glorification of the Lord and salvation of the human race.

This focus was a Divine seed, which fused with Mary’s haploid chromosome set, to allow the Lord to be born into the physical world and grow up to live among humans. Therefore, the Lord’s soul or spirit within this seed was Jehovah Himself, but His body was formed from Mary’s hereditary input.

To grasp what generative powers constituted the Divine seed we have to first ask ourselves “What is a seed?” Answer: A seed is a concept—a complete blueprint for something to take final shape. (For instance, a tree seed contains the complete idea and patterning principles of the mature tree). God’s seed contains the complete idea of His grand cosmic plan and purpose for creation—to create a heaven from the human race! (What else would be the “twinkle” in God’s eye?)

But the human race was on a downward trajectory. Divine intervention was called for.

The Divine seed and patterning principle that impregnated Mary’s ovum was nothing less than the Holy Word Itself. It was God’s Infinite Truth and living blueprint that, through Mary’s ovum, could become infused with a flawed human corporeal ego and its false sense of self. This human hereditary baggage would now be constantly matched against the ultimate Truth as the Lord grew up in the world.

By resisting human proclivities towards evil and the vanities and allurements of the world, the Lord’s life on earth served to bring what genetically belongs to man in harmony with what belongs to God.

What most traditional theologians are unaware of is that the narratives of Scripture (God’s Word) depict this combat between God and human imperfection when the natural meanings of its literal sense are distilled to reveal higher spiritual meanings. This higher-level exposition reveals profound details of the sacred process of how the Lord made the Word flesh by combating His human compulsions (and Hell’s influences) until He successfully united His Human essence with His Divine Essence. This is how the Lord Jesus became one with the Father and Glorified Himself as the Alpha and Omega. This is also why there was an empty tomb.

We all must go through a similar process to obtain salvation and eternal happiness. Our success can only come from imploring the help of the One who succeeded in overcoming all repugnant human traits. If we do this and adopt the spiritual principle of mutual love into our hearts, minds and lives we will indeed help God create a heaven from the human race! (The God Guy)

via How did God impregnate the Virgin Mary? | who is the God of heaven ? the jesus I never knew..

via How did God impregnate the Virgin Mary? | who is the God of heaven ? the jesus I never knew..