Argentinian Pope gives the Isle of Wight to the Argentines 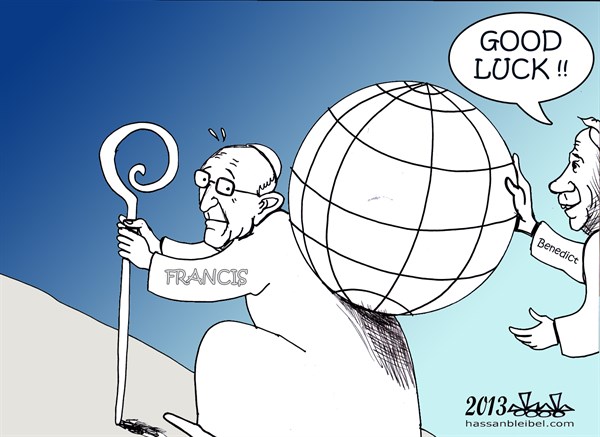 In a move that is is sure to anger somebody, the new Pope, Pope Francis the something or other, has been approached by the Argentinian government who have requested that the Falkland islands are given to Argentina.

Sadly, Frank’s knowledge of geography is quite poor, and he has given Argentina the Isle of Wight instead.

“I would have thought,” said Newport councillor Franco Di Santo, “that all Argentinians would have known where the Falkland Islands were. Apparently not. This suggests that the vast majority of Argies have no idea that Argentina actually wants the Falklands, or even that the they tried to invade in the eighties.”

The residents of the Isle of Wight are not particularly bothered by the Pope’s gift to his country of birth.

“To be honest,” said Maxi Rodriguez, a resident of Ryde, “I’m not particularly bothered whether we’re governed by Buenos Aires or London. Neither really gets what’s going on with us on the Island.”

Cristina Fernández de Kirchner, the president of Argentina, is less than thrilled with the gift.

“There’s no oil in the English Sleeve,” she said. “What is the use of the gift? Not that we wanted the Malvinas because of oil, I must add rather too quickly. Nevertheless, I fail to see what we could do with the Wight Isle. What is a Garlic Festival? Why does Newport have more garden gnomes than any other place on earth? And why is nobody allowed on Ryde Pier? These are important questions we would need answering.”

David Cameron has announced that he will not be objecting to the gift of the island to the Argentinians.

“I had a really bad holiday in Cowes when I was seven,” said Cameron. “It remains to this day a bad memory for me. On a cost basis, it’s a bit of a money hole. We subsidise the chain link ferry, we subsidise the farmers there, despite there being no arable land at all on the island from what I can tell. It’s not so much the money, more the bad memory.”

Pope Frankie was reluctant to talk about it, but when pressed, he admitted that he didn’t realise that the British had islands so far from their mainland, and had been taking a week’s holiday in Greece during the Falklands war and missed it.

via The Spoof : Isle of Wight News – Argentinian Pope gives the island to the Argentines funny satire story.

via The Spoof : Isle of Wight News – Argentinian Pope gives the island to the Argentines funny satire story.