← Call for labels on Israeli settlement products
Of the Week… →

As he left the conference hall following his address, some delegates chanted: “no more cuts.”

One delegate, Bolatito Aderemi from the Dublin South West branch, started to sing: “All we are saying is enough is enough.

As he passed her Dr Reilly said she should “stick to her day job”.

A number of delegates objected to the Minister’s comments and said the union should seek an apology. 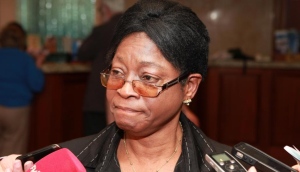 Ms Aderemi, who is originally from Nigeria, said the Minister had shaken her hand, tried to give her a hug and said he was sorry and did not mean to embarrass her. She said she accepted his apology.

Dr Reilly had been greeted in silence as he arrived at the conference. However he received applause following an anouncement that nurses would hold senior leadership positions inthe proposed new hospital groups and in the Department of Health.

He said each of the proposed new hospital groups, to be announced formally next week, will have to have a director of nursing as a full executive on the management team.

“I will (also) establish a new chief nursing officer role within the Department of Health, that this role will be at assistant secretary level and a full member of the management advisory committee and will have executive authority to lead the nursing profession in Ireland and represent its perspective both to Government and internationally.”

Dr Reilly told delegates that pay savings of €150 million had to achieved in the HSE this yearin addition to the many reforms and efficiencies designed to improve servies and to live within its budget.

“Frankly, we are between a rock and a hard place.”

The Minister said that management and unions were meeting at the Labour Relations Comission to explore all the avenues open to try to reach a resolution to reducing the paybill.

“If we can find such anagreement it would be so much better than an imposed solution.

However he said the country was borrowing €1 billion per month and that this could not continue.

← Call for labels on Israeli settlement products
Of the Week… →