← Bradley Manning News Round up
Obama, Putin Agree Never to Speak to Each Other Again →

NSA surveillance: what Germany could teach the US 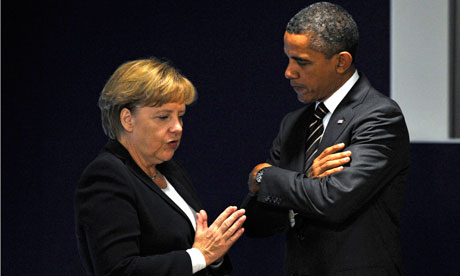 At the end of the G8 meeting in Northern Ireland on Tuesday night, Barack Obama and Angela Merkel will hop on a plane bound for Berlin together. Merkel has already boasted that she will make their meeting an awkward one, promising to ask uncomfortable questions about the Prism affair. The image that comes to my mind is that of a pinscher yapping at a great dane, while the great dane just benignly gazes into the distance.

Of course, the pinscher has every reason to bark its lungs out. Surveillance of worldwide internet communications, as practised by the National Security Agency (NSA) through Prism, is the stuff of Orwellian nightmares. Any democratic system rests on the idea that its citizens can think and act freely – but no individual can act and think freely while being watched. The very fact of being watched means that we act differently. Unsupervised communication between individuals is an essential precondition for a functioning democracy.

There will always be people who dismiss complaints about state surveillance as hysteria. Since 11 September 2001 it has become increasingly easy to discourage those who care about their fundamental rights. Just insist that a new measure will aid the fight against terrorism, and that legitimises it. Particularly in Britain and the US, many people seem surprisingly blase about the idea of the state watching over them.

I despair at such indifference. Germany endured two totalitarian systems in the 20th century. Not just Nazism, but the GDR too, built a dictatorship on the surveillance, registration and selection of individuals. People became objects who were divided into nebulous categories. The fight against terror requires a similar division of civil society according to sex, age, ethnicity, religion and politics. The problem with such machine-led screening methods is not only that it is very hard for people to escape them once they get caught, but that they no longer presume innocence – everyone is now a potential suspect.

Because of this, Germans have traditionally been more sensitive to assaults on their private sphere. There are fewer CCTV cameras, and Google’s Street View project was met with widespread resistance in 2010: click yourself through a map of Germany and you’ll still find large areas still pixelated. A few weeks ago, Germany published its first post-reunification census – the previous ones in the 1980s were widely boycotted on ethical grounds. But that Germany hasn’t reached the level of the US is not thanks to politicians’ sense of history, but to the so-called “basic law” that anchors our constitution and the federal constitutional court that protects it. One “security law” after the next has been proposed and then rejected by the court for infringing on civil rights.

But being a little more sensible on civil rights issues than other European states will no longer do. On the contrary: with its unique historical background, Germany should be leading the charge against any form of Big Brother system.

Having been raised in East Germany, Merkel especially should know what is at stake here. She experienced in her youth how long-term surveillance can demoralise the human spirit and distort the character of a society.Explaining that to her American counterpart would be a start for Merkel. She should explain to him that there is a lesson for the rest of the world in Germany’s history. In the 21st century, modern technology will take the possibility for total surveillance to a completely new level. Compared with what Prism allows you to do, Stasi activities look like child’s play: the size and speed of the data flow threatens to overwhelm the lawmakers who are meant to control it.

My fear is that Merkel’s protest will be hard to take seriously, and that Obama will notice this. Since 9/11, Merkel’s government has also passed laws that allow the state to virtually x-ray its citizens. Der Spiegel recently reported that Germany’s equivalent of the NSA, the BND, is planning to expand its web monitoring programme over the next five years.

Ultimately, Merkel’s emphatic concern about the Prism affair stems from the fact there will a federal election in Germany in September. It’s a convenient chance to demonstrate a bit of political spine. Once the pinscher’s done with the yapping, the great dane will give her a kindly smile and assure her that everything is happening within the law. After that, the excitement about Prism will soon evaporate, and they in America and we in Europe will continue collecting data.

Data protection is to the communication age what environmental protection was for the age of industrialisation. Back then, we lost decades because we didn’t realise how severe the damage we were causing really was. Let’s try not to make the same mistake twice.

• This article was amended on Tuesday 18 June. Angela Merkel was born in Hamburg, not East Germany, as the seventh paragraph originally stated. She was raised in East Germany.

via NSA surveillance: what Germany could teach the US | Juli Zeh | Comment is free | The Guardian.

← Bradley Manning News Round up
Obama, Putin Agree Never to Speak to Each Other Again →