Anglo Irish Banks -Most Recent Updates from home and Abroad 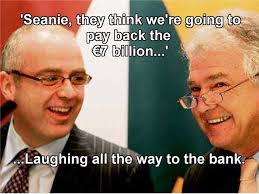 Irish Times
“The contempt shown by Anglo Irish Bank for the Irish people and for their welfare and their public institutions was probably not very different from the attitude taken up by some of the other banks. We just do not have first-hand aural evidence of the …
See all stories on this topic »

The Anglo Tapes, The Guarantee And Ireland’s Economic Crisis

Probably the biggest economic story in Europe this week has been the release of recorded phone calls from 2008 between executives of the now-notorious Anglo Irish Bank.  Anglo was a recklessly… read full article

Irish PM shocked by ‘vulgar’ Anglo Irish Bank tapes
New Straits Times
BRUSSELS : Irish Prime Minister Enda Kenny said Friday he was thunderstruck by leaked tapes at the centre of a scandal at the bailed-out Anglo Irish Bank which he said has tarnished Ireland’s reputation. But Kenny said after an EU summit in Brussels …
See all stories on this topic »

Mocking Germans Adds Irish Insult to Banking Injury
Bloomberg
Irish politicians say jibes at Germans by some of the country’s former bankers undermine their case for securing help to cut the 64 billion-euro ($83 billion) bill for saving the financial system. John Bowe, a former executive at the now defunct Anglo …
See all stories on this topic »