← The Size of Austerity
Hunger Strike: The Irish Experience →

Bradley Manning Must not be Forgotten 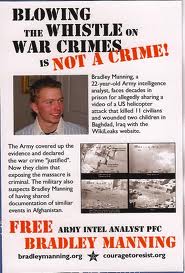 With thousands of articles being written about Edward Snowden, many of them repetitious, we must remember another whistleblower who is presently on trial.  Bradley Manning must not be forgotten.

Private Manning is being court-martialed for giving secret information to WikiLeaks in 2009 and 2012, while he was a junior intelligence analyst stationed in Iraq. Government prosecutors claim that Manning had obtained 700,000 files, combat videos, and diplomatic transmissions.

The prosecution’s case ended today, Tuesday.  The defense will begin on Monday.

Manning’s lawyer, David Coombs, says that the young man leaked information, but believed it was not harmful to United States interests because it contained no operational value.

Julian Assange, an Australian, says the charges are reprisal for WikiLeaks’ publication of information embarrassing to the U.S. and other governments.

Mairead Corrigan-Maguire, an author and peace prize winner, believes that Manning should receive the ‘Nobel Peace Prize.’  She believes he should be credited for helping to end the war in Iraq, and keeping the United States from participating in other conflicts.

Ms. Corrigan-Maguire says this about peace:  “Peace is more than simply the absence of war; it is the active creation of something better. Alfred Nobel recognized this when he created alongside those for chemistry, literature, medicine and physics, an annual prize for outstanding contributions in peace. Nobel’s foresight is a reminder to us all that peace must be created, maintained, and advanced, and it is indeed possible for one individual to have an extraordinary impact.”

Ms. Corrigan-Maguire recently returned from Syria.  She spoke with refugees, rebels, and Syrian security forces.  She says that hawks such as John McCain are wrong about assisting the rebels.  The majority of the extreme violence is the product of outside military components on both sides.  She said that the ‘true rebels’ and Syrian forces, all want to find a way to a peaceful end to the conflict.

She said that before Manning’s actions, and a growing condemnation of our continued presence in Iraq by the American people, Syria would already have been invaded by a number of U.S. forces.

Transparency of crimes against humanity is prevalent in the Middle East today.  She said if Manning had not taken actions, the world would not have known the truth about the atrocities inside Iraq.  US forces committed covert crimes in the name of spreading democracy in Iraq, killing innocent civilians in incidents such as the one depicted in the “Collateral Murder” video, and supported Iraqi prisoner torture.

She points out that Manning is the only one on trial.  None of those who committed inhumane acts during the Iraqi conflict have been brought up on charges.

Ms. Corrigan-McGuire’s final words:  “I hope American leaders will embrace the U.S. constitution, and base their national and foreign policies on ethical values, human rights and international law.”

via Bradley Manning Must not be Forgotten | The Guardian Express.

← The Size of Austerity
Hunger Strike: The Irish Experience →