Do Gooders and Guilt Tours in Luang Prabang 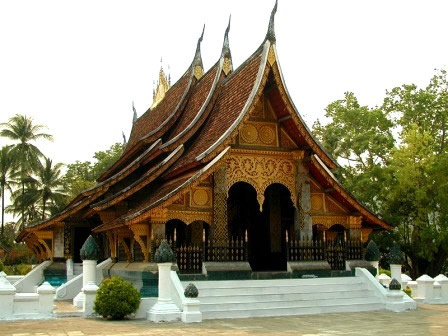 Sheila lives in Luang Prabang, Laos. She runs a shop, and has a little dog that is fiercely protective when strangers come around. But the little dog has nothing on Sheila. “Don’t get me started,” Sheila warns. Then she starts.

“The government organizations; the UN organizations; the NGOs — they come to Laos, piss millions of dollars against a wall. They bring their families, they have their four-wheel drive vehicles, and they drive around visiting Vietnam and Cambodia and Thailand and have a wonderful time. Then they go home. And they’re useless.

Countries are starting to tell them to stay away. These organizations are now paying countries to let them in so they can do their great work. Now they’re all leaving Laos for Myanmar — that’s their next big project.

“NGOs send kids over here, lots of good intentions, but without any of the skills or talents that might be of some use. My friend Jane calls them ‘blancmanges.’ They’re just bland, ordinary kids with none of the abilities they require to make a difference — especially in a country like this one that has essentially jumped from the 16th century to the 21st. And the kids don’t last — they’re gone in a hurry.”

Sheila is a 50-ish Australian ex-pat who has lived in Luang Prabang for 15 years. Upon learning that she was conversing with a Canadian writer, she asks not to be identified. “I have to live here,” she says. And she has plenty to say about some of her imported neighbours. “All of these businesses started up by ex-pats that promise to ‘give back’ to the community,” she snorts. “Please. Almost nobody gives back. There are perhaps a couple of good organizations here and the rest are lining their pockets. Like those ‘Western guilt‘ tours, where people pay money to come and paint an orphanage. Does the orphanage get the money? No. The tour company pockets the money. And I talk to the orphanage workers — they say, ‘How many new coats of paint do we need?’ They ask for money to feed the kids instead. But no. They get more fresh paint. And the tour company gets paid.”

Ryan Young is not quite so dyspeptic. Young manages Joma Bakery Cafe, one of the few Luang Prabang joints that offers travelers a real espresso and an English language newspaper. The cafe, co-owned by former Vancouver residents Michael Harder and Jonathan Blair, is active in supporting a local charity called Pencils of Promise. And he says they do give back. “One per cent of our sales goes to Pencils of Promise and one per cent goes to Hagar International, which helps women escape from sexual slavery. We also hire those women. And we participate in a lot of projects with Pencils of Promise. This week our staff members, who are from the local community, were out helping kids find healthier ways to prepare some favourite local dishes.”

Young, who came to Luang Prabang from Portland, Oregon, about 18 months ago, does not discount Sheila’s points. “If there’s no commitment after the project,” he says, “if it’s just about having a picture of yourself posing with a brown kid to put on the fridge at home, well, that’s always a red flag.”

“When Pencils of Promise goes into a community to build a school we ask for 25 per cent contribution from the community, whether that’s labour or cement or whatever. We make sure the building is one that they want and one that fits into the community, whether it looks good in a photo or not. We make sure there is a teacher in place and ongoing program support, or we don’t do it. Since the ‘Three Cups of Tea’ controversy there’s more awareness and more scrutiny — you need to make sure there’s going to be a school functioning after the builders leave.”

That contrasts with Sheila’s description of one international aid project. “We asked the EU people to come and build a new three-room high school at the orphanage so kids wouldn’t have to leave at age 14 or so. The orphanage people told me, ‘Sheila, come see our new school.’ So I did. I asked, ‘Where’s the furniture? Where’s the electricity? Where are the blackboards?’ Well, the EU people didn’t do that. They get kudos for four walls and a ceiling and that’s the end of it. The orphanage had to raise another $8,000 to get equipment. Same thing when the hospital got built — no equipment. They don’t care. They do their little bit and take off.”

Sheila does mention an organization that she believes does good work in Luang Prabang — Lao Kids, a group that raises money for local schools, orphanages, and hospitals, with all members working for free.

Not every local do-gooder group is volunteer run. Big Brother Mouse is a self-described non-profit that publishes children’s books and promotes reading parties at local schools to help Laotian kids develop reading skills. They sell their books directly to the public, and also ask for donations to fund the reading parties at a cost of $300-$400. They’ve received plenty of great publicity. But when hearing about their work it’s easy to miss the fact that they are not a charity.

“To be fair,” Young says, “Big Brother Mouse never claims to be a charity. And really, the responsibility is on the giver. If you’re not just trying to make yourself feel good — if you want your money to be used effectively — it’s up to you to check out the financial statements of an organization.”

Young is also more forgiving of big NGOs in Laos. Groups like Save the Children and World Vision have to deal with the Laotian government. “I’m told there are 16 different government departments and they don’t recognize each other,” Young says. “There are turf wars — they all want to sign off on the project. They send government representatives out to supervise, and they all have to be paid per diems by the NGO. After a school gets built I’m told that sometimes the costs of hosting government officials is greater than the cost of building the school.”

One of Sheila’s stories seems certain to inspire a mix of anger and pride in a Canadian listener. “There was a Canadian government operation back in the early part of this century — maybe 24 or 28 young Canadians came over here. They were going to promote waste reduction and recycling in Laotian schools. The kids spent the first few months learning the language, and then they were sent off to the provinces. It was supposed to be a two-year program. By the end of, I think, a year, there were only three of the Canadians left in Laos. The others had all run home.

“But those three were wonderful. They had each of them figured out that this program was never going to work. So they decided to figure out what they could do to actually help. One guy asked the locals, ‘What do you need?’ And they said, ‘Water supply systems.’ So he put together a program that not only helped the village water supply but eventually had them making money by selling water systems to other villages. It was great. But all the while he was sending these bullshit emails back to the Canadian government people, saying, ‘Yeah, yeah, I’m executing the program, it’s going great.’ And meanwhile he was doing something completely different, but useful.”

Sheila can’t remember the name of the Canadian woman who had been assigned to Luang Prabang. But this young Canadian too figured out that the plan wasn’t working. “She was supposed to be teaching the kids to gather paper waste,” Sheila says. “But then what? There was no place for it. They actually ended up burning the stuff because they didn’t know what else to do.”

The Canadian realized that recycling facilities were needed and began lobbying the government. Eventually a plant was built and contracts signed with China and Vietnam, so that today there is some recycling going on, with local women being paid to collect plastic containers.

Little credit for that goes to our government. “At one point they sent over a bunch of consultants to speak to the Laotians,” Sheila recalls. “The Canadian girl told me, ‘Sheila, I have a master’s degree in this stuff. But I couldn’t understand what these people were saying. And they were talking to the Laotians this way — nobody understood a word.’ Then the consultants got back on their plane — probably had a nice vacation as well — and they went home. The Canadian government must have spent a lot of money to send them — more money pissed against a wall. If I was a Canadian taxpayer I’d be pretty angry.

“That young woman used to get so mad at the Canadian government. She would come in here and say, ‘Can I just stand here and vent?’

“That’s the kind of person you need to get something done here,” Sheila says. “Not these wimpy kids they keep sending.”

If the mysterious Canadian ever does return she’ll be pleased about one thing — Joma Cafe has Nanaimo bars. 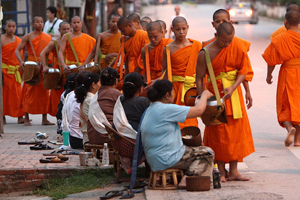 via The Tyee – Do Gooders and Guilt Tours in Luang Prabang.

via The Tyee – Do Gooders and Guilt Tours in Luang Prabang.