The Donald doesn’t like a challenge, particularly if it concerns his birth certificate.

Trump wasted no time this week responding to a challenge set by Irish American comedian Bill Maher on the ‘Tonight Show with Jay Leno.’

Maher, 56, announced on Monday night he would donate $5 million to the charity of Trump’s choice if he was able to prove that he is not the ‘spawn of his mother having sex with an orangutan.’

Some people would have taken the high road, ignoring the obvious insult. Not Trump though. On Tuesday, Scott S. Balber, a lawyer for Trump, 66, sent the HBO’s ‘Real Time with Bill Maher‘ host a letter with Trump’s birth certificate attached.

To underline the gotcha, the letter asked Maher, said to be worth $40 million, to come up with the promised cash.

The birth certificate demonstrated that Trump ‘is the son of Fred Trump, not an orangutan,’ the letter said. 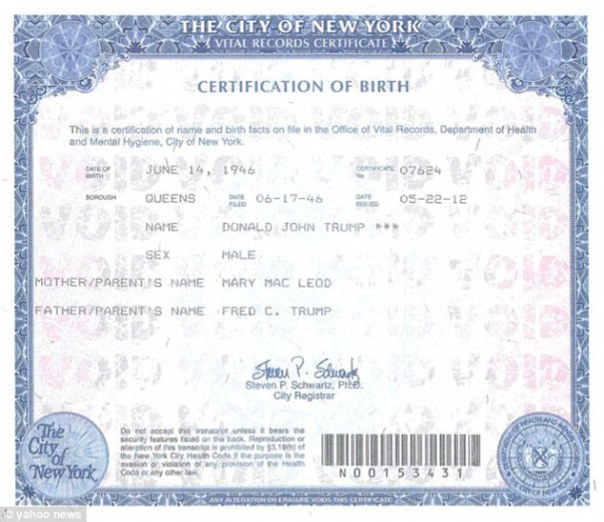 Maher had earlier suggested Trump would likely donate the cash to the ‘Hair Club for Men’ or ‘The Institute for Incorrigible Douchebaggery’ but Trump’s letter indicated he wants to give $1 million each to charities for the Hurricane Sandy Victims, The Police Athletic League, The American Cancer Society, The March of Dimes and the Dana-Farber Cancer Institute.

Maher’s birth certificate malarky was a pointed send up of Trump’s notorious announcement in October that he would donate $5 million to charity if President Obama would release his college records.

At the time Trump declared he was sitting on ‘something very, very, big concerning the president of the United States’ that could ‘possibly’ change the election.

But the public was unimpressed with the big reveal, however, when it turned out to be just more birtherism, which many commentators decry as blatant racism – since its suggests that Obama is not ‘one of us.’

Obama later made fun of Trump on the ‘Tonight Show,’ suggesting that the bad blood between himself and Trump stems back to an argument the pair had ‘when we were growing up together in Kenya.’

According to the Daily Mail a representative for Maher did not immediately return a request for comment. ‘I’m not looking for a feud with Donald Trump,’ said Maher on the Tonight Show.

via Donald Trump presents birth certificate to Bill Maher to prove his father was not an orangutan –  | Irish News | IrishCentral.

via Donald Trump presents birth certificate to Bill Maher to prove his father was not an orangutan – Irish News | IrishCentral.