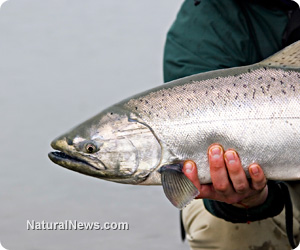 NaturalNews) In yet another blow to GMOs, several major U.S. food retailers have signed on to the “Campaign for GE-Free Seafood” found at http://www.foe.org/gefreeseafood

These retailers include Whole Foods, Trader Joe’s, Aldi and many more. It’s the latest private sector blow to the deceptive biotech industry. Consumers overwhelming reject GMOs even if the FDA conspires with biotechnology companies to try to shove genetically engineered food down their throats. Activist organizations like Natural News, the Organic Consumers Association and the Institute for Responsible Technology have helped organize constant grassroots pressure on food retailers to either label GMOs or reject them outright.

“A coalition of consumer, health, food safety and fishing groups today launched the Campaign for Genetically Engineered (GE)-Free Seafood by announcing that several major grocery retailers representing more than 2,000 stores across the United States have already committed not to sell genetically engineered seafood if it is allowed onto the market,” reads the press release announcement. It continues:

What’s interesting about this announcement is that the mainstream media is largely refusing to link to the FOE.org website for fear of readers learning more about the “Friends of the Earth” organization and its GE-Free Seafood petition.

The mainstream media, I can tell you firsthand, has engaged in a longstanding conspiracy to attack GMO labeling, deny the presence of GMOs in food and spread quack science propaganda that favors the biotech industry. But they are losing this battle over GMOs and losing their audiences at the same time. The New York Times, in particular, is an absolute disgrace when it comes to reporting to truth about GMOs, and it’s no surprise the NYT seems constantly on the verge of bankruptcy while being known as the “toilet paper of record.”

Note, too, that the FDA seems determined to hide GMO ingredients in foods as a strategy to make sure consumers have no clue what they’re buying and eating. This campaign of intentional consumer ignorance and disinformation echoes the key underlying philosophy of the FDA and the biotech industry: LIE TO EVERYONE. Hide GMOs. Confuse, deny, obfuscate and disorient. Pollute the ecosystem, poison the fields, falsify the science and rake in the profits. That’s the mantra of the biotech industry.

Thankfully, they’re not getting away with it. This is the second significant announcement by Whole Foods on the issue of GMOs. Just two weeks ago, the retailer announced mandatory GMO labeling across all its stores by 2018.

Whole Foods has no doubt realized that coming down on the wrong side of history with respect to GM food is nothing short of corporate suicide. Trader Joe’s had better wise up as well, because here at Natural News, we pledge that by 2018 or possibly sooner, we will publicly expose the GMOs sold by Whole Foods, Trader Joe’s and other retailers unless they are actively and authentically moving toward labeling and / or eliminating all GMOs from their stores. We support Whole Foods’ effort to label all GMOs by 2018, but if this turns out to be some sort of PR stunt that isn’t followed through in terms of real action, the grassroots activist community will hold them accountable.

There will be transparency on this issue whether the retailers like it or not. Any retailer still selling GMOs by 2018 will be publicly shamed, ridiculed and boycotted by the informed masses of foodies and health-conscious consumers. Sure, all those who pledge GMO labeling say they have chosen to “do the right thing” because they’re all such angels, right? But those of us in the trenches of the info war on the issue of GMOs know the raw, brutal truth of the matter: unless large retailers are pressured into honoring their commitments on GMOs, they may conveniently forget them. My experience with these matters, which is considerable, says that only through the application of grassroots pressure and the constant threat of public humiliation will these retailers make good on their promises to reject or label GMOs.

That’s the ugly but authentic truth of how these things really work behind the scenes. So keep the pressure on, folks, and these retailers will sooner or later be forced to reject GMOs entirely. A victory against Monsanto (i.e. a victory for the future of life on our planet) is within reach. Keep applying pressure and be prepared to continue your activism for as many years as it takes to put Monsanto permanently out of business.

Anglers and environmentalists have called on the Minister for the Marine Simon Coveney to intervene to prevent the establishment of a number of major salmon farm projects at various locations off the Irish coast.

About 200 campaigners from as far away as Donegal, Fermanagh and Galway as well as from Cork, Kerry and Tipperary converged in Carrigaline in Co Cork on Saturday, from where they marched to Mr Coveney’s constituency office and handed in a letter of protest.

Mr Coveney was not at the office at the time, but the protesters held a rally where speakers urged him to heed warnings that further salmon farms at sea would lead to an increase in sea lice and damage wild Atlantic salmon stocks.

Bord Iascaigh Mhara has applied for a licence for a €60 million deep-sea salmon farm on a 500 hectare site in the lee of Inis Oírr, the most southerly of the Aran Islands, with the promise of creating 500 jobs in the area.

Separately, Norwegian owned company Marine Harvest Island is proposing a €3.5 million salmon farm for Shot Head off Adrigole in Bantry Bay in west Cork as part of a €14 million investment in its 16 aquaculture sites in Irish waters.