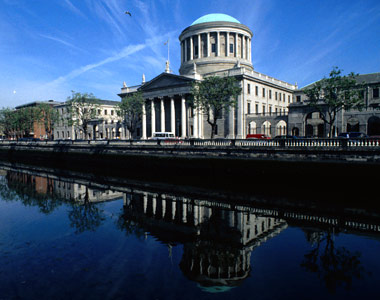 This morning in the High Court in Dublin, after Miriam Freeman had spoken for 4 days on her motion against Bank of Scotland (Ireland), she has finally been vindicated in her long running case.  She has been ably supported by two of the founder members of DDI Ben Gilroy and John Squires, and by Awaken Longford and others (unnamed) who have all collaborated with the Freeman family to defeat all motions of Bank of Scotland (Ireland) in case of P FREEMAN & ANOR V BANK OF SCOTLAND (IRELAND) LTD & ORS.

Ben and John have been helping fight this case in their role with People For Economic Justice since it started 2 years ago, and in Court 16 this morning Mr Justice Gilligan dismissed the motions put by Bank of Scotland, and finally sent the case forward for full trial on the issue of securitisation.  The team has been seeking a full trial without success for some time and have been stymied by counter motions by Bank of Scotland.  So critical is this case that the Chief Executive Officer of Bank of Scotland had been required to fly from Scotland to be present in Court.

Now for the first time in Ireland the issue of securitisation of mortgages is going to be heard in court.  The ramifications of this will affect almost every mortgage in the state, as the vast majority of mortgages have been combined into financial instruments and sold off as securities to other investors.  It was this kind of securitisation that inflated the banking system to a state of bankruptcy and caused the financial bubble that sees us now forced into living under austerity.

In a separate case this week another motion supported by People for Economic Justice against an Irish based bank resulted in the bank settling out of court for a seven figure sum. For legal reasons because of the settlement the case cannot be quoted.

Ben spoke after the case saying that he hoped that those detractors who have been spreading misinformation about how he, and other lay litigants who take on the banks, operate in court, either in the media, printed press and in cyberspace, will be honourable and correct the imbalance they have caused to so many people.

There is now around 12 weeks for full discovery and responses before the case moves on and it may affect any current repossession cases.  What we must look at now is what will be the financial fallout.  We know the banks are bankrupt and we know the finance ministers have legalised bail-ins, we also know the heads of Ireland’s banks have just met at the Central Bank, a bank who’s legal position was described in court today as a grey area.  So now is a time that people must be aware and wary of what the government’s next move may be to protect their system

Fraud saga acts as a costly lesson for all financial regulators

It may seem like a stretch but there is a direct correlation between the AIB annual general meeting in 2001 and the conviction of fraudsters Achilleas Kallakis and Alexander Williams in the Southwark Crown Court yesterday.

Twelve years ago the country’s biggest bank had its annual gathering in the RDS. The shareholders were restive. They lacerated the management team for letting the arriviste Anglo Irish Bank eat its lunch. The latter’s profits were surging on the back of runaway property lending.

After the very public dressing down, AIB chief executive Michael Buckley and his fellow senior executives, decided on a change of tack — one that would prove fatal. They might have come to the party late, but there was a lot of money to be made from the gravity-defying property markets and the Ballsbridge-headquartered bank intended to cash in.

Of course the drawback of playing catch-up is that it encourages a much greater risk-taking culture. Nothing else could explain the credulity-defying events that led to Kallakis and Williams receiving prison sentences of seven and five years respectively.

Through a series of outrageous lies they extracted £740m (€884m) from AIB’s London office over a five-year period. They also swindled Bank of Scotland out of £26m.

Handing down the sentences, Judge Andrew Goymer said: “AIB and Bank of Scotland have undoubtedly acted carelessly and imprudently by failing to make full inquiries before advancing the money. Indeed the latter bank was given clear and precise warnings by its lawyers about the risks of accepting assurances in a letter from an alleged co-conspirator, a Swiss lawyer.

“It almost beggars belief senior management chose to disregard that warning and rushed to complete the deal at all costs. It is apparent from the evidence both the defendants took full advantage of the prevailing banking culture in which corners are cut, and checks on them superficial and cursory. The banks do bear some degree of responsibility for what happened.”

The obvious question is how could AIB advance so much money to one source without doing proper due diligence? It points to completely inadequate risk management controls in place at the time.

One senior banking source said that when the cracks started to appear in the financial system in 2007, Anglo Irish Bank and AIB were still very active in London at the same time that other banks were rowing back significantly on their lending operations.

The two fraudsters’ elaborate ruse was finally rumbled when AIB tried to sell on one of their loans to the German bank Helaba. Helaba did a few cursory background checks and found out that the pair’s property empire was built on a tissue of lies.

Kallakis and Williams, or Stephan Kollakis and Martin Lewis, to give them their real names, had created a web of several opaque offshore companies to guarantee AIB loans. Not that along the way AIB London executives shouldn’t have picked up on a few clues that all might not be what it seemed.

Kallakis claimed the Hong Kong investment firm Sun Hung Kai Properties was guaranteeing one of the loans, however, if anybody from AIB contacted the firm then the guarantee would become null and void.

Lured by the promise of spectacular returns from a pair of snakeoil salesmen, the Irish bank could not help itself.

AIB won’t comment on what lessons it has learned from this saga, but presumably it has beefed up its due diligence procedures. The level of exposure to any one lender is another painful lesson to be learned. How to spot irrational behaviour fuelled by a completely unsustainable asset bubble is a lesson not just for AIB management, but also financial regulators in Ireland, the UK, the eurozone and across every Western economy.