New York:New York) Ucs News : This week it was revealed that Donald Trump has added the words Bloviating Ignoramus to the more than 200 trademark applications that contain his own name. The 200-plus number is held up as an example of his greed; his need to increase the value of his name (claimed to be $3 billion) by attaching it to “every kind of product imaginable, from hotels to perfume to a vanity beer label.”

A search on the U.S. Patent and Trademark Office website shows the good, the bad, and the ugly: 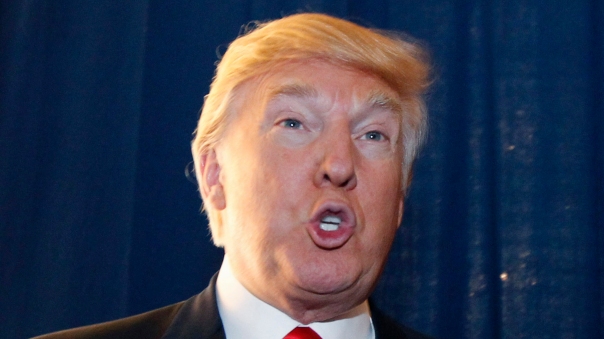 More than 400,000 people have signed an online petition demanding that Macy’s fire human ocarina Donald Trump from their ad campaign and remove his merchandise from their stores. Signers object to Trump’s obsession with the “racially charged birther conspiracy” and his frequent calls for overthrow of the democratically elected government. I guess they have a point—”terra cotta plutocratic genocidal warlord” doesn’t exactly scream THE MAGIC OF CHRISTMAS.

“Donald Trump does not reflect the ‘magic of Macy’s,” reads the petition via SignOn.org, the progressive nonprofit online campaign arm of MoveOn.org. “We urge you to sever ties with him. Macy’s says it has a strong obligation to be ‘socially responsible’ and that ‘actions speak louder than words.’ Indeed. It’s time to act.”

…Aside from his controversial birther views-which have long been discredited after Obama authorized his birth state of Hawaii to release his long-form birth certificate-the petition also notes Trump has “used his public platform to deny the reality of climate change.” It also smacks him for sexist behavior and “personally attacking women he disagrees” with.

Additionally, his detractors point out the reality star has “hypocritically complained about jobs being shipped overseas to China, despite the fact that almost his entire clothing line sold at Macy’s is made in China.”

Um, yeah, and by the way? Can the fucking Apprentice get canceled already? Can somebody fire Donald Trump from something? Aren’t there ANY consequences for being literally the worst guy in the country!?!? Pleeeeeeeeease??? [E!]

via Enraged Shoppers Demand that Macy’s Fire Donald Trump for Being a Disgusting, Ugly Shitbag.

via Enraged Shoppers Demand that Macy’s Fire Donald Trump for Being a Disgusting, Ugly Shitbag.

Donald Trump claimed on Fox news he has a major announcement to make about the president on Wednesday that will change the election.

I can reveal exclusively what the surprise is likely to be. My Trump sources tell me it is one of the following ten things;

1. The Mars Rover has found Obama’s birth certificate on Mars

2. That means Obama is an alien

Or it could be:

3. Obama and Hillary have had an affair, mostly conducted on Air Force One

4. This explains what happened over Benghazi – they were on date night and missed it.

Or perhaps it is that

5. Obama is gay, and Trump has found out

6. This explains all that Bromance with Bill Clinton stuff, ever see how they embrace each other?

Or maybe it is that

7. Obama is a cross dresser and thinks he is Oprah Winfrey

8. That explains why her magazine is called O

9. Obama is becoming white, he has that Michael Jackson thing going

10. That means he is going to star in a Black and White Minstrel Show at the White House for Trump.

See, that was easy.

via We reveal what secret Donald Trump is planning to announce about Barack Obama | Irish News and Politics spanning the US, Ireland and the World | IrishCentral.

via We reveal what secret Donald Trump is planning to announce about Barack Obama | Irish News and Politics spanning the US, Ireland and the World | IrishCentral.