“Safe fracking” is a fairy tale

Scientists: There is no such thing as “safe fracking” 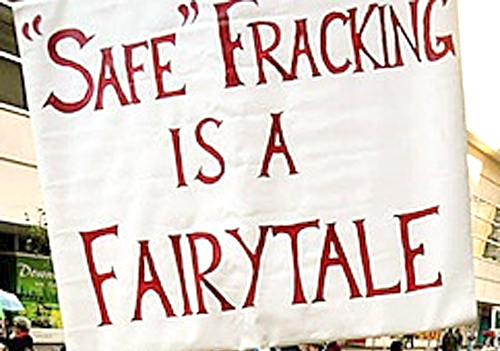 There are a few new reports from Europe on fracking that provide a lot of valuable information:

A joint report from Germany’s Federal Environment Agency and Federal Ministry for the Environment, Nature Conservation and Nuclear Safety was released in September. Among the conclusions about the environmental impacts of fracking:

There are current gaps in knowledge about environmental risks.

Germany should use a step-by-step approach on the use of fracking.

There should be tight restrictions and a ban in areas that provide drinking water and spa regions.

An environmental impact assessment should be conducted for every fracking project.

Also in Germany, Exxon-Mobil funded a panel of independent experts to conduct a Hydrofracking Risk Assessment (the lengthy executive summary is available in English). Yes, you heard me correctly: while Exxon-Mobil financed the study, the company had no say in the content of the report or the selection of scientists and none of the scientists involved in the study had ever worked for the oil and gas industry prior to this project. Can anyone imagine ExxonMobil funding a similar project in the U.S.? The panel of experts was monitored by about 50 stakeholder groups. Among the conclusions about the environmental impacts of fracking:

Hydrofracking-induced incidents can do substantial harm to water resources.

The greenhouse-gas footprint of shale gas is between 30 to 183 percent greater than that of conventional natural gas.

Some of the chemicals currently used in fracking should be replaced due to environmental risks.

Fracking should be banned in certain areas such as areas with severe tectonic risk, areas with pressurized artesian/confined deep aquifers and continuous pathways, and Germany’s Zone I and Zone II drinking water protection areas and thermal spring conservation areas (which may be the same as the spa regions mentioned above). [In Germany, Zone I is 10 meters from a water well and Zone II is the distance from which it would take contaminated groundwater 50 days to reach a water well.]

Before fracking is allowed in broad areas, a new legal framework is needed as well as additional scientific knowledge.

For now, the only fracking that should be allowed is exploratory wells and single model demonstration projects—under extensive safety conditions—designed to define and optimize the state of the art, gain a greater understanding of the impacts of fracking, and test practices. Such efforts should only occur along with extensive in-depth dialogue with stakeholders and new statutory and planning structures.

The European Commission’s Environment Directorate-General also issued a comprehensive report (almost 300 pages) in September. It is a very thorough description of the fracking process, many of the best practices available to reduce risks, and European rules. Among its findings and recommendations regarding environmental impacts:

There is a high risk of surface and groundwater contamination at various stages of the well-pad construction, hydraulic fracturing and gas production processes, and well abandonment, and cumulative developments could further increase this risk.

Air emissions from numerous well developments in a local area or wider region could have a potentially significant effect on air quality including ozone levels.

There is a significant risk of impacts due to the amount of land used in shale gas extraction and it may not be possible fully to restore sites in sensitive areas following well completion or abandonment.

There are gaps or inadequacies in EU legislation that could lead to risks to the environment or human health not being sufficiently addressed.