BOSTON bombing suspect Dzhokhar Tsarnaev has uttered his first word after being charged with using a weapon of mass destruction – “No”.
The 19-year-old, who could face the death penalty if convicted, was mostly silent and nodded affirmatively throughout the brief bedside hearing, indicating that he understood the charges laid against him, court transcripts published by The New York Times reveal.
But when asked if he could afford a lawyer, the teen spoke for the first time, saying: “No”.
Details of Tsarnaev’s bedside hearing came amid reports that the teen reportedly told investigators his older brother and alleged co-conspirator Tamerlan was the driving force behind the bombings.
CNN says Tsarnaev, who has an injury to his throat, has communicated he and his brother acted alone and that Tamerlan, the older of the two, was the ringleader in the bombings.
The teen has reportedly told investigators that no international terrorist groups were behind the act and that his elder brother carried out the bombings as he wanted to defend Islam from attack, CNN says.

MORE TO SAUDI ARABIA’S CONNECTION TO BOSTON BOMBINGS THAN MEETS THE EYE?

During his Monday evening broadcast, Glenn Beck addressed news surrounding Abdul Rahman Ali Alharbi, the Saudi national who was at one point considered a “person of interest” by U.S. authorities in the aftermath of the Boston bombings.

“Believe me we have spent an enormous amount of time [on this story],” Beck noted during his program’s opening remarks.

“Most of my staff have not slept, those in Washington and around the country and in New York have really not slept. We have been meeting with attorneys and congressman trying to make sure it is exactly right,” Beck said.

While Alharbi has gone from a person of interest, to a witness, and now to someone deemed unimportant to the case, sources have told TheBlaze that there is more to this story than is being told by the media or the government.=

BOSTON, April 22 (Reuters) – A day of remembrance in Massachusetts reached around the world.

Hundreds of mourners crowded outside a suburban Boston church on Monday for the first of a series of funerals for the victims of the Boston Marathon bombing. It was followed by an evening university service for another young life cut short, this time a student from China.

The morning funeral was for Krystle Campbell, 29, a restaurant manager, and the evening’s for graduate student Lingzi Lu, whose death resonated in China.

The April 15 attack at the marathon’s finish line killed three people and injured more than 200.

No public funeral has yet been scheduled for the bombing’s youngest victim, 8-year-old Martin Richard.

No reports of link between Boston bombers, Caucasus militant group

Moscow, April 23 (IANS/RIA Novosti) The Russian branch of Interpol has said it had no information on any links between the two men suspected of the deadly bombing at the Boston marathon and a militant organisation based in Russia’s North Caucasus.
“We are not searching for anyone, we have received no tip-offs,” said Interpol Russia official Dmitry Yershov. “We do not have this information.”
US media reports have suggested that investigators are searching for links between Dzhokhar Tsarnaev and Tamerlan Tsarnaev, the two men suspected of the April 15 bombing of the Boston marathon, which killed three and left 180 people injured, and the Caucasus Emirate militant organisation.

A Missouri State Student is thankful to be alive after a disturbing picture of her running the Boston Marathon surfaced.

It shows her just feet away from the accused bombers, moments before the bombs went off. 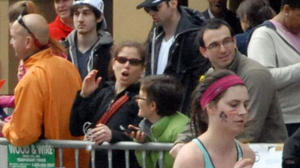 The picture shows 20-year old MSU student Tina Bradshaw at the very end of the Marathon. She runs right by the two bombing suspects.

The picture was circulated in newspapers and online, around the World.

Bradshaw was running the race for her father who died from lung cancer a year before. She had just gotten her medal when the bombs went off.

She didn’t discover the picture until she got back home.

“I think it’s crazy that out of the 27,000 runners, I’m the one in the picture with the bombers a few feet by me. It’s terrifying and bone chilling to think what could have happened,” Bradshaw said.

She’s running her 6th marathon in Colorado in two week

Boston Marathon bombing suspects Tamerlan and Dzhokhar Tsarnaev may be all of the above, but how we attempt to come to grips with the attacks allegedly perpetrated by the brothers has much to do with how we identify them.

The brothers “don’t neatly fit into pre-existing boxes,” says Peter Spiro, an international law professor at Temple University. “It is a very complex picture,” challenging the psychological need to “set the boundaries of the in-group and treat others differently.”

For many Muslims, even the possibility that the perpetrators could be Muslim reignited the fear that all people of that faith would pay a price in the form of discrimination or retaliation or shame. “Please, don’t be a Muslim” many tweeted in the hours before the suspects were pinpointed.

The older brother, Tamerlan, 26, was an avowed Muslim, although it is unclear whether his younger sibling shared his beliefs. The question of who the suspects were only became more bewildering as time dragged on. The brothers were identified as having roots in the Russian republic of Chechnya, in the North Caucasus mountains. Did this make them Caucasian — or “white” — in the way many Americans read that word? Misunderstanding ensued, leading to some 1,200 retweets of the following message: “Fox News just said ‘Chechens are not Caucasian’ despite the fact that Chechnya is literally IN THE CAUCUS [sic].” Embedded in the misunderstanding is the stereotype that to be a Muslim, one must be a darker-skinned person of Middle Eastern descent.

Asra Nomani, a Muslim writer, noted that some members of the larger Muslim American communities with Middle East or South Asian roots expressed relief when they saw photos of the accused bombers.

“ ‘Brown’ Muslims were like, ‘Whew, it’s not one of us,’ ” she said. “And then people felt that would protect Arabs or Indians or whomever from being targeted. It’s like a sigh of relief.”

Dalia Mogahed, author of “Who Speaks for Islam?,” acknowledged the human need to try to make sense of something as inexplicable as the marathon bombing by creating categories of a person, and a profile.

Add to that the brothers’ names, which many find difficult to pronounce.

“Maybe 2 percent of Americans could accurately pinpoint Chechnya on a map,” Spiro says. Evidence for that point: The Czech Republic’s statement last week that the brothers were not from that country. “They certainly fit our idea of foreign.”

Or do they? According to news reports, Dzhokhar Tsarnaev was reared in the Boston area, developed strong relationships there and joined the wrestling team. There is little in his emerging biography that has stood out as foreign.