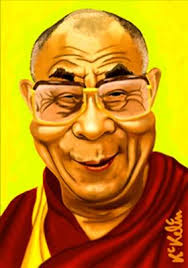 Reports from Dharamsala, India, home of the Tibet-in-exile government, confirm that in the early hours of this morning, His Holiness, the Dalai Lama has given birth to a male heir.

The Dalai Lama was quoted as saying, “I was performing my early morning meditations as usual and sitting in the lotus position. I had just achieved a complete level of relaxation when I felt something drop. Naturally, I assumed it was my holy excrement, so I summoned my attendant to collect it for sale in Hollywood, again as usual. Imagine my surprise when I looked down and the little shit was looking back up at me!”

Followers of the Tibetan Buddhist leader were jubilant upon hearing the news that there was now an heir to the ailing Dalai Lama. Incense, firecrackers, prayer wheels and flags, chanting and colourful demonstrations quickly spread around the world. However, celebrations have now been dampened by the further announcement that the baby lama is Chinese.

A spokesman for the Dalai Lama has issued a strongly worded statement blaming the Chinese government for the birth. “We have inside information that it was definitely the Chinese. Except for His Holiness’ non-political trips to America, France, Britain, Mexico, Guatemala, Germany, Italy, South Africa, Canada, Morocco, Singapore, Japan, Norway, Peru, Cuba, Poland, Russia, Turkey, Nigeria, Jamaica, Taiwandid I include America?, in the past year, the Dalai Lama has been right here in the lamasery with the other monks. And believe me, Tibetan monks know how to have safe sex without conception.”

n an unusually swift reaction, the Chinese government in Beijing has also claimed that the baby lama is indeed Chinese. Lin Hung, the young, handsome and popular Chinese appointed governor of Tibet has claimed he is the father and that he and the Dalai Lama have been having a clandestine affair for the past two years. Hung claims that the Dalai Lama has made numerous visits to their secret lovenest in Lhasa disguised as a Buddhist monk.

The Dalai Lama’s attendant who was present at the birth has confirmed that Lin Hung is the likely father. “The baby lama has His Holiness’ ears, but everything else looked well Hung”, according to the attendant.

The Chinese authorities, and Tibetan Governor Lin Hung have invited the Dalai Lama and baby lama to return immediately to Tibet, and Potala Palace is being readied for their arrival. “The Chinese baby lama is a wonderful gift from the entire Chinese people to the Dalai Lama and all Tibetans. This baby will bring the peace and harmony we all so desperately want to restore”, said Chinese President Hu Jintao. Governor Lin Hong made a more emotional appeal directly to the Dalai Lama. “This was not just a dalaiance on my part. I love you and our baby lama. Please come home. If you don’t return, I will put a photo of our missing baby lama on every milk carton in China.”

In a move to ensure the return of the Dalai Lama and baby lama, the Chinese government in Beijing today issued an immediate order legalizing same sex marriage and granting partners and children of same sex relationships full and equal rights. To engender world support, the Chinese have also put in a bid for the 2012 Gay Olympics to be held in Lhasa with Governor Hung, the Dalai Lama and baby lama as official hosts. To protect the health and safety of baby lama, the Chinese government has also immediately banned the illegal melamine contamination of yak milk within 500 yards of Potala Palace and urged the Dalai Lama to breast feed.

A poll taken in Tibet by Chinese authorities immediately after the birth announcement shows that 117% of Tibetans want the Dalai Lama and baby lama to return. The poll has a margin of error of +/- 3%. “It’s up to the Dalai Lama now to prove what kind of man he really is”, quipped a street vender outside Potala Palace hawking baby lama souvenirs.

Has the Dalai Lama got this Totally Wrong?

Tibetans committing self-immolations were in principle practising non-violence as they had the courage to sacrifice their own life for a cause they believe, Tibetan spiritual leader Dalai Lama said on Sunday.

“I consider these Tibetans burning — certainly these people have courage and determination to sacrifice their own life, so they can easily harm other people — but I think these people, although they practised a little bit of violence, but I think in principle they still practise non-violence,” the Dalai Lama said.

He said that the younger generation of Tibetans in Tibet these days have stronger determination as compared to earlier generations.

The Nobel Peace laureate cautioned that the situation in Tibet is serious. “Now, things are serious. Whether Chinese government agrees or not, there are problems and these problems are neither good for Tibetans or for the people of China. So, we have to find a solution based on mutual understanding and mutual respect,” he said.

He was addressing the members of Tibet Support Groups from all over the world who have gathered here to discuss the ongoing situation in Tibet.

The TSG pledged to mobilise the international community to press the Chinese government to find a lasting and mutually-agreeable solution to the Tibet issue.

On the concluding day of the Special International Tibet Support Groups Meeting organised here from November 16 to 18, the TSG members expressed solidarity with Tibetans inside Tibet for their unwavering determination to non-violence.

Over 200 members of the TSG from 43 countries carried out extensive discussions to find solutions to the Tibet issue.