In my long article in the first issue of Irish Left Review on Ireland’s corporate tax regime I made the point that Ireland in effect sells its abilities to make tax laws to profit hungry MNCs, in much the same way as it sells to the rights to our natural resources to large oil companies. That is, whatever economic benefit there is, and its small, goes to the ‘agents’ who negotiate the deal, with very little, if any, benefit appearing in the economy.

Still, with all the attention being on Google for a while now, there was one fact about the Irish government’s arrangements with the search engine company that I had missed.

Recently these arrangements, known as the Double Irish with the Dutch Sandwich have been given a lot of attention and are often explained. For example, see this New York Times info graphic. However, while listening to Jim Stewart’s interview on Morning Ireland last Friday in a conversation about Google’s ‘grilling’ before the UK’s Public Accounts Committee on taxation, I found out that the ‘Dutch Sandwich’ is no longer used, and instead Google’s earnings from its EMEA market goes from Google Ireland to Google Ireland Holdings, which is registered in a solicitor’s office at 70 Sir John Rogerson’s Quay and also in Bermuda. So, by passing these to the Bermuda registered company, the earnings go straight to Bermuda. Google Ireland Holdings has no employees and is ‘owned’ by Google Bermuda which also has no employees. Both are unlimited companies, so under Irish law, they do not have to publish accounts.

If, as we are told, everything is on the budgetary table, why is there no place for an increase in the corporate tax rate? By Michael Taft.

We are constantly assured (warned) that ‘everything is on the table’. All manner of tax increases and spending cuts are being considered, and none are ruled out in principle. So, goes the script. There is one issue, however, that is not on the table. It is not even in the room. It is not even in the house or lurking around the grounds. And that issue is the corporate tax rate. Why?If we increased the corporate tax rate, this would undermine our ability to attract foreign direct investment. This, in turn, would result in fewer jobs being created and put current jobs at risk; further, it would lower exports which would skewer our balance of payments. All that value-added and economic activity would be jeopardised.

Before we confront this argument, let’s first look at how successful multinationals (MNCs) are in racking up profits in Ireland (also, this analysis from Michael Burke is worth a read). From this, we might get a sense of how sensitive they would be to an increase in the corporate tax rate. For, in truth, they are really really racking up the profits. 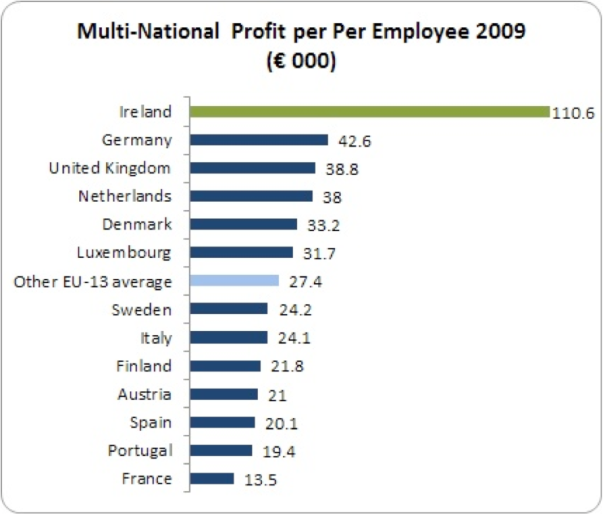 Ireland is not just a league-leader, it is off the chart. MNCs here make more than four times the profit per employees than the average of the other EU-15 countries reporting (no data for Belgium or Greece). No wonder more and more multinationals are making Ireland their home. It should be noted that this Eurostat data does not include the financial sector, so the massive profits being made in the IFSC are not included. Nor does the above include taxation – we’ll come to this later.

Not only are MNC profits high in Ireland, they are resilient. 2009 was the year that saw global profitability fall. But not in Ireland. Whereas in 2009 profits fell in the other EU-13 countries by an average of 17%, in Ireland they fell by less than 1%.

This is just the overview – let’s look at some key MNC sectors in Ireland. In the Manufacturing and Information & Communication sectors, Irish MNC profits are through the roof.

In the Manufacturing sector, MNC profitability in Ireland is nearly ten times that of MNCs in other countries. In Information & Communication, the ratio is more than three-to-one.

In other sectors, MNCs in Ireland also exceed the EU average but not to the same degree.

In each of these sectors – particularly retail and transport – MNC profits in Ireland significantly exceed the average of other countries.

Only in two sectors – the Professional & Scientific and Accommodation – is MNC profit in Ireland lower than the average of other EU countries. These two sectors, however, are relatively small, making up less than 2% of the turnover of all MNCs in Ireland.

Another, albeit smaller category, is MNCs owned by ‘offshore financial centres’ (OFCs). One would assume that these would be primarily involved in the financial sector. But the data here refers to the non-financial business sector. These OFCs are still relatively small (making up only 3% of all MNC turnover in Ireland). But they are growing  In the dark days of 2009, OFCs saw their turnover nearly double over 2008, with the number of OFCs operating in Ireland also doubling. And no wonder: they take nearly €61,000 in profits per employed in Ireland while in other countries this figure is nearly half – €34,300.

Of course, there is an Alice-in-Wonderland character to all these numbers. Profits, turnover, value-added – these are all distorted by transfer pricing. MNCs do not actually produce these levels of profit in Ireland – not all of them; they ‘report’ a considerable level of profit here, taking advantage of transfer-pricing in order to exploit our ultra-low corporate tax rates and the facility to engage in global tax avoidance (which is why a US Senate Committee described Ireland as a tax haven – see page 30).

But we should also take note: all of the above reports profits before tax. If we had an after-tax figure, we’d find the gap between MNCs in Ireland and the other EU countries grow even wider. For instance, Germany comes second when it comes to MNC profit per employee, at €42,600. On that they pay a headline corporate tax rate of 30%. In Ireland, with MNCs taking €110,600 per employee, the headline rate is 12.5%. Yes, the effective tax rate (after reliefs and allowances) will be lower – but it will be lower for both countries.

Profits are rising in Ireland. They increased by 4% in 2010 and 7% in 2011. According to the CSO, this is largely accruing to multinationals.

So here is a question: if all things are on the budgetary table, why is there no place for an increase in the corporate tax rate? This would not undermine pre-tax profits, and even if it were raised by a mere 2.5%, it would still be lower – much lower – than almost any other European country.

And here is another question: where in Europe, indeed the world, can MNCs make as much profit as in Ireland even if the corporate tax rate were increased?

So, why is the issue of the corporate tax rate taboo? That’s an easy question to answer: because it has been elevated to almost metaphysical status. In the Dail the Taoiseach stated piously:

“The key elements of the Jobs Initiative included: reaffirming, as the Minister for Finance repeated yesterday, that our 12.5% corporate tax rate remains sacrosanct…”

To declare something sacrosanct is not an invitation to debate. It is a threat. For to challenge the sacrosanct is to engage in heresy, blasphemy, apostasy.