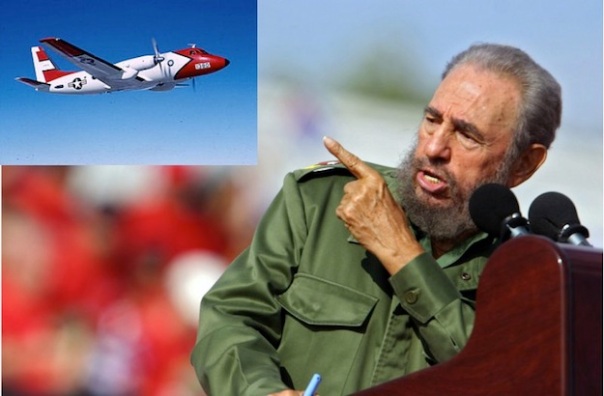 For the last six years, the U.S. government has spent more than $24 million to fly a plane around Cuba and beam American-sponsored TV programming to the island’s inhabitants. But every day the plane flies, the government in Havana jams its broadcast signal. Few, if any, Cubans can see what it broadcasts.

The program is run by the U.S. Broadcasting Board of Governors, and for the last two years, it has asked Congress to scrap the program, citing its exorbitant expense and dubious cost-effectiveness. “The signal is heavily jammed by the Cuban government, significantly limiting this platform’s reach and impact on the island,” reads the administration’s fiscal year 2014 budget request.

But each year, hard-line anti-Castro members of Congress have rejected the recommendation and renewed funding for the program, called AeroMarti. Now, under the restrictions of government-wide belt-tightening, AeroMarti may finally die, but its fate has yet to be sealed.

“It’s hard to believe we are still wasting millions of taxpayer dollars on beaming a jammed TV signal – that fewer than 1 percent of Cubans can see – from an airplane to the island,” Sen. Jeff Flake (R-AZ) tells The Cable.

For Flake and fellow critics of the program, AeroMarti has called into question America’s decades-long information war against the Castro regime. But other Castro critics say the U.S. must continue to find ways to disseminate messaging onto the autocratic island.

At the moment, the AeroMarti twin-engine Gulfstream 1 plane is grounded in Georgia due to the automatic spending cuts known as sequestration. But the program’s ultimate fate will be determined by the House and Senate Appropriations Committees.

Under ordinary circumstances, the plane flies a figure eight pattern near the Communist island beaming hours and hours of TV and Radio Marti, a U.S.-financed broadcaster akin to Radio Free Europe. From 2006 to 2010, AeroMarti burned through $5 million every year. In 2010, its budget was reduced to around $2 million per year. One iteration of the program involved a C-130 military plane and another involved a blimp attached to a cable 10,000 feet above the Florida Keys. All told, the flights have racked up a tab well over $24 million to U.S. taxpayers.

“Proponents of the program say we can’t stop doing it because it would send a bad message to the Cuban government that we’re capitulating,” John Nichols, a communications professor at Penn State University, tells The Cable. “That’s bogus: It’s ineffective, it wastes a huge amount of money and the compromise we make to keep it on air, knowing it violates international law, is not at all worth it.”

Since its inception, the U.S. government has spent well over half a billion dollars to fund Marti programming, which first aired on radio in 1985 and on TV in 1990. The programming includes everything from baseball games to local news to weather reports to interviews with anti-Castro dissidents. Its staunchest supporters in the House and Senate include Sen. Robert Menendez (D-NJ), chairman of the Senate Foreign Relations Committee, and Rep. Ileana Ros-Lehtinen (R-FL).

Ros-Lehtinen, in particular, is known for insisting that AeroMarti continue flying despite its dubious effectiveness. When repeatedly asked about the program this month, she declined to comment.

Menendez is not known to have advocated for the plane specifically, but he is a supporter of Radio and TV Marti in general.

“I will continue to stand behind the mission of Radio and TV Marti until the Cuban government ceases to deprive its citizens of objective and uncensored media sources,” he told The Cable. “The Martis play a critical role in providing information to the Cuban people about events in and outside of Cuba, connecting with nearly a million Cubans every week. In this day and age, there are numerous platforms, new media tools, and technologies available to the Martís to fulfill and continue this integral mission, and I believe we should use every possible medium to break through the Castro regime’s censorship barriers.”

As it stands, the administration’s budget request specifies not continuing AeroMarti. It is now up to the congressional committees to object to the proposal, which none have done thus far.

But regardless of what happens, it won’t stop the programming of Radio and TV Marti as a whole. The BBG is enthusiastic about moving forward with other methods of getting its programming to Cuban viewers and listeners: disseminating DVDs, doling out flash drives, broadcasting via satellite and even offering a new smartphone app. The various work-arounds all carry Marti’s programming.

“We have evolved to what our market demands,” Carlos Garcia-Perez, director of the BBG’s Office of Cuba Broadcasting, tells The Cable. “We’re no longer just a TV and radio and internet operation, we’re a multimedia operation.”

In the past, Marti has come under criticism by critics such as Nichols who say its purpose is to peddle “anti-Castro propaganda.”

“Even if the propaganda plane reached its audience, there’s little evidence the Cuban people are going to spend their leisure time watching Cuban exiles snarl about Castro,” said Nichols.

Senator Flake told The Cable he is similarly opposed to the channel. “While the president’s most recent budget request would stop funding the flights, Congress should do the same with the TV Marti program as a whole,” he said.

Garcia-Perez rejects the notion that Cuban listeners aren’t interested in Marti’s offerings, and ticked off a range of news events — from the Venezuelan elections to the death of Osama bin Laden to the health struggles of Hugo Chavez — where audience records were broken. “In November 2010, our website got 500 hits per day,” he said. “Now it’s 7,000 per day, and when there’s a huge event going on it gets up to 15,000.” For a typical media organization, that’s not much to write home about, but Garcia-Perez says it’s a lot considering that Havana blocks its web pages, requiring readers to access copies of the site on proxy servers. He also claimed that his system of e-mails, text messages, flash drives and DVDs is capable of reaching 1 million Cubans on the island. “We’re here to provide the free-flow of information,” he said, noting the Castro regime’s draconian censorship of the press.

As for the content of Marti, other independent observers say its programming has improved in recent years under Garcia-Perez’s leadership, which has steered away from more transparent anti-Castro messaging. “I have been impressed with the reforms at Radio Marti and Marti Noticias since the new director took over and shifted away from propaganda toward a more hard news and debate format,” Ted Henken, a professor of Latino studies at Barch College, told The Cable. “They constantly interview people on the Island via phone and that’s made the reporting far more grounded.”

But despite differences about the value of Radio and TV Marti, there’s one thing almost everyone agrees on: Spending millions of dollars a year to fly a plane around Cuba is not the savviest use of taxpayer money.

via U.S. Spends $24 Million On ‘Propaganda Plane’ Few Can See or Hear | The Cable.