The dastardly dirty Dermot Desmond will be receiving the outstanding contribution to Ireland award out in his lair: the IFSC.

Out there among the clusterfucks of wholesale financial “products”, Desmond broods over his €1.35 billion fortune and laughs in the face

of the now deceased “Robin Hood Tax” which Consigliere Noonan sorted out recently, ensuring speculative behaviour on the markets will not be be reasonably taxed.. No! That cold, hard cash has to come from Household Charges, Water Taxes and Civil Service Pensions.

The award will no doubt emulate just another notch in this man’s ethically troubled belt: Citibank, Pricewaterhouse Coopers, Aer

Rianta… then things get topical. A debut in the Glackin report preceded several guest appearances in the Moriarty Tribunal, followed by a cameo in the Flood Tribunal. Some hairy deals and questionable “loans” with the Haughey family, including paying for Charles’ yacht to be refurbished to the tune of £75,000, began to make Desmond look like the kind of alumnus Citibank would be proud of. With many different offshore

bank accounts, Desmond has racked up an intriguing paper trail to follow the abortion that was the Johnston Mooney and O’Brien land deal. This award certifies our Desmond as dancing in the big leagues of corporate culture. Godspeed you dirt merchant!

One in eight of our super-rich are tax exiles, reveals Revenue 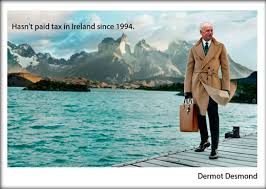 ALMOST one-in-eight of Ireland’s richest people are tax exiles, according to the Revenue Commissioners.

Of the 450 “high wealth” individuals, 54 are resident abroad for tax purposes.

This is the first time the tax authorities have released figures relating to how many Irish tax exiles are in the super-rich league.

Revenue said that last year its “high wealth” section dealt with 450 individuals who have net assets worth more than €50m and non-residents with “substantial economic interests” in Ireland.

It said the “number of non-resident individuals that are considered by Revenue to be high-wealth individuals is currently 54”.

Membership of the “54” club is confidential. But some of Ireland’s biggest business figures are known to have moved their bases to generous foreign tax shelters. This means they only have to pay tax on Irish earnings and not on their worldwide income.

Michael Smurfit, the paper packaging tycoon, has moved to Monaco while the racehorse magnates JP McManus and John Magnier are both tax resident in Switzerland. The supergroup U2 moved part of their business from Ireland to Holland after the Government capped the tax exemption scheme for artists.

In contrast, Michael O’Leary, the Ryanair chief executive whose wealth is estimated at €438m by rich lists, famously said he is happy to pay his taxes here.

While the official number of “tax exiles” is 10,781, some are people who moved abroad, rent their homes and pay tax here on the rental income. Others are foreigners working for multinationals here, or who have investments here.

Collectively they generated €49m in tax last year although it’s not clear how much the super-rich club of 54 contributed.

To qualify as “non-resident”, they must spend less than 183 days a year in Ireland, or 280 days over two years.

Michael Noonan, the Finance Minister, has been lobbied by business interests claiming that any attempt to tighten tax exile rules would scare off investors. A “domicile levy” of €200,000 imposed on wealthy Irish citizens living abroad for tax purposes raised just €1.6m in 2010.

Gerald Nash, a Labour TD for Louth, said: “While it is a fact that Ireland now has a taxation system that is considered by international standards to be among the fairest in the world, the system at the higher end needs to be radically altered to ensure that exacting standards are applied to so-called tax exiles in terms of their treatment for tax purposes.”