At no time during the day was any legal authority cited for the detention of the kayakers besides a “request” by security that the kayakers leave the area.

Aamer has been cleared for release twice, but is still behind bars after 11 years. He has never been charged or faced trial but the US refuses to allow him to return to the UK, despite official protests by the British government.

A 40-strong medical back-up team has arrived at Guantánamo Bay, as the number of inmates taking part in a hunger strike continues to rise, the US military has confirmed. By Monday, 100 detainees were refusing food, with 21 having been approved for force-feeding.

Authorities said that the “influx” of medical reinforcements had been weeks in the planning. But the news will fuel speculation that the condition of hunger-striking prisoners at Guantánamo Bay is deteriorating. Shaker Aamer, the last British resident being kept at the centre, told his lawyer earlier this month that authorities will soon see fatalities as a result of the current action.

“I cannot give you numbers and names, but people are dying here,” said Aamer, who is refusing food.

The action is a protest against conditions at the centre, as well as the indefinite nature of the remaining prisoners’ confinement. Aamer has been cleared for release twice, but is still behind bars after 11 years. He has never been charged or faced trial but the US refuses to allow him to return to the UK, despite official protests by the British government.

Of the 166 detainees left at Guantánamo, almost two-thirds are on hunger-strike. Five of those approved by guards to be subjected to force-feeding are in hospital.

Increased media attention to the plight of prisoners at Guantánamo Bay has led to renewed calls for President Barack Obama to close the camp. In the face of pressure from Congress, Obama dropped a 2008 campaign pledge to close the camp.

The current hunger strike is believed to have begun on 6 February and initially involved a minority of detainees. But the number taking part has steadily increased. Two weeks ago, guards attempted to break the resolve of those refusing food by moving detainees from communal areas and placing them in single cells, where they could be monitored more closely. That action led to violent clashes in which US troops fired four “less-than-lethal” rounds on inmates.

US authorities said on Monday that the decision to bring in a back-up medical team was made as increasing numbers of inmates began to refuse food. “We will not allow a detainee to stave themselves to death and we will continue to treat each person humanely,” a Guantánamo Bay spokesman, Lt Col Samuel House, said.

He added: “Detainees have the right to peacefully protest, but we have the responsibility to ensure that they conduct their protest safely and humanely.”

Less than a week after a violent crackdown on detainees, Guantanamo Bay has a new problem, as hunger strikes are taking their toll and more and more prisoners are in failing health.

“Code yellow,” an emergency where a prisoner has lost consciousness, is now a regular event in the cellblocks, forcing medics to rush in and see if the detainee is still alive, or just passed out from hunger. So far, it has been the later, but as the strike continues it will eventually lead to deaths.

Over 100 prisoners are now believed to be involved in the hunger strike, which began in February to protest the confiscation of detainees’ Qurans during a security sweep. The Pentagon initially claimed only nine strikers, but now admit to over 50. They claim the rest aren’t “official” hunger strikers, and accused them of “cheating” and sneaking snacks.

Lawyers and human rights groups have urged reforms at the prison to end the strike, as well as releasing people already exonerated instead of just keeping them forever. The military seems to be taking the opposite approach, punishing strikers and putting everyone in solitary cells in the hopes of scaring them into abandoning the strike. With many detainees already cleared for release and apparently going nowhere, they remain convinced they have nothing to lose. 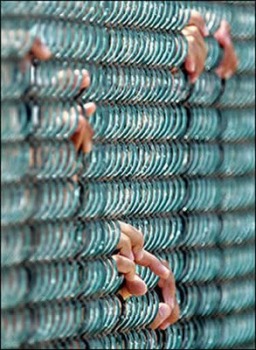 Hunger strikes among an estimated 100 detainees have continued to worsen, with the military now conceding that as many as 28 are “officially” hunger striking, and three of the detainees have been hospitalized as their conditions deteriorate. 10 others are also being force-fed.

The deteriorating health is largely what was expected, as hunger strikers have been taking water, but no food for months, and medical experts have warned that permanent consequences could happen soon, with deaths possible in a matter of weeks.

The hunger strikes began after the confiscation of several detainees’ Qu’rans, and is continuing with many detainees resenting being held without charges more or less forever.

The military has been very slow in recognizing strikers, and even today continues to insist that it believes many of the detainees are “cheating” and sneaking snacks when they aren’t looking.

The “not looking” factor has been the Pentagon’s go-to excuse for not recognizing the strikers as real, insisting that they deliver communal meals and don’t really keep an eye on who is eating and who isn’t, and insisting that the numbers cited by human rights lawyers are “exaggerated.” Yet with Pentagon recognitions jumping several-fold in the past week, they are rapidly coming to admit the problem.

With many of the detainees already approved for release, it would be a particular embarrassment if some of them began dying in hunger strikes simply because the Obama Administration hasn’t gotten around to letting them go for so long. This was a driving factor behind not admitting the problem was real in the first place, but with it clearly not going away, there will hopefully be some move to give in to detainee demands.

via Three Hospitalized as Gitmo Hunger Strike Continues to Worsen — News from Antiwar.com.

via Three Hospitalized as Gitmo Hunger Strike Continues to Worsen — News from Antiwar.com.