This movie is now 103 years old and it is still captivating… amazing. Now a little bit of Movie History

The Movie is only 12 minutes long

Frankenstein is a 1910 film made by Edison Studios that was written and directed by J. Searle Dawley. It was the first motion picture adaptation of Mary Shelley’s Frankenstein. The unbilled cast included Augustus Phillips as Dr. Frankenstein, Charles Ogle as the Monster, and Mary Fuller as the doctor’s fiancée.

Shot in three days, it was filmed at the Edison Studios in the Bronx, New York City. Although some sources credit Thomas Edison as the producer, he in fact played no direct part in the activities of the motion picture company that bore his name.

For many years, this film was believed to be a lost film. In 1963, a plot description (reprinted above) and stills were discovered published in the March 15, 1910 issue of an old Edison film catalog, The Edison Kinetogram.
In the early 1950s a print of this film was purchased by a Wisconsin film collector, Alois F. Dettlaff, from his mother-in-law, who also collected films. He did not realize its rarity until many years later. Its existence was first revealed in the mid-1970s. Although somewhat deteriorated, the film was in viewable condition, complete with titles and tints as seen in 1910. Dettlaff had a 35 mm preservation copy made in the late 1970s. He also issued a DVD release of 1,000 copies.
BearManor Media released the public domain film in a restored edition on March 18, 2010,[6] alongside the novel Edison’s Frankenstein, which was written by Frederick C. Wiebel, Jr.
On 14th October 2010, to celebrate the 100th anniversary of the film, English writer and director Dave Mitchell released an online re-boot of the original film called “Frankenstein 1910 2010”, with new title-cards based more on Mary Shelley’s original novel, as well as re-tinting of the frames, and the use of Saint-Saens’ “Danse Macabre” as the new soundtrack. The new version title cards focus on the concept of the rejected creation’s words to his creator, who he perceives as his friend. 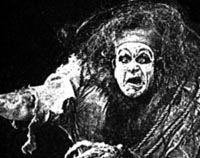 The film’s most well-known shot