The Irish face of the English Defence League (EDL)

THIS is the controversial Luton Irishman behind the far right English Defence League who have been protesting against ethnic groups on Britain’s streets in the aftermath of last month’s Woolwich terrorist attack in London. 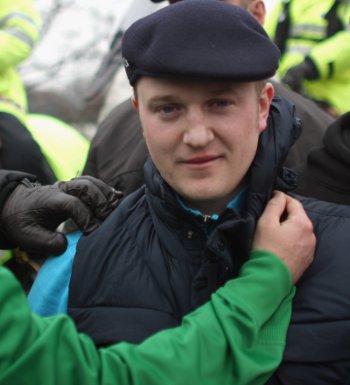 Founder Stephen Lennon has mobilised EDL members in violent anti-Islamic protests across the country, which has seen mosques and Muslim communities targeted, in the two weeks since Soldier Lee Rigby was killed.

However, the threat was not followed through.

Lennon, who goes by the name Tommy Robinson, was born to a Dublin mother and Scottish father in Luton, where he formed the extremist group in 2009.

Although he classes himself as an Englishman, he has publicly claimed to be ‘proud’ of his Irish heritage, but messages on his Twitter feed reveal the opposite.

Posts found on Lennon’s social networking account, show the second-generation Irishman regularly refutes his heritage and abuses those who claim he is Irish.

He has also posted a string of anti-Irish slurs and remarks.

In one message he claims his parents would be “in Ireland picking potatoes and eating cabbages”, if they hadn’t moved to England.

Elsewhere those tweeting him are branded ‘fools’ and ‘wronguns’ for claiming he is Irish.

Another post is used to inform his followers that “cos of all this abuse from plastic paddys we are taking a tidy mob to England Ireland on 29th.”

The group congregated in Trafalgar Square before marching to Westminster and descending on a ‘Support our Troops’ demonstration being held in response to the Woolwich killing.

Thirsty-year-old Lennon, who co-founded the EDL in Luton with fellow second generation Irishman Kevin O’Carroll – whose parents also hail from Dublin – was among a masked group of EDL members in Woolwich two weeks ago on the night after Drummer Rigby’s death.

That protest saw violent clashes with police as more than a hundred EDL members hurled bottles and anti-Muslim abuse while demonstrating close to the scene of the attack.

Violence erupted as mosques were attacked and police attempted to control the scene, where EDL members chanted “no surrender to Muslim scum’ and ‘rule Britannia’.

The following Saturday the group led a similar protest in Newcastle, before returning to London last Monday (May 27) for the Downing Street demo.

When contacted by The Irish Post the EDL failed to respond.

The EDL protests have increased fears of far right reprisals upon the Muslim community in Britain.

Former London Mayor Ken Livingstone was among politicians and anti-fascist supporters who took a stand against the EDL last week.

He called for British citizens of all communities to condemn their violent protests and unite against fascist movements who may seek to capitalise on fears surrounding the Woolwich killing.

“There will be those who will seek to scapegoat entire communities for this barbaric act,” said Mr Livingstone, Honorary President of United against Fascism group.

“This is what terrorists want, and rely on. For people to feel fear, to turn on each other and to bring down the very essence of London, the most successful melting pot in the history of the world and the city of the free.”

He added: “Already, violent fascists have taken to the streets in Woolwich adding insult to the injury that community is feeling. Already there have been reprisal attacks against Mosques. We must not let this violent minority exploit this crime for their own hateful gains.”

via Revealed: The Irish face of the English Defence League (EDL).

“How dreadful are the curses which Mohammedanism (Islam) lays on its votaries (devoted followers)! Besides the fanatical frenzy, which is as dangerous in a man as hydrophobia (rabies) in a dog, there is this fearful fatalistic apathy. The effects are apparent in many countries. Improvident habits, slovenly systems of agriculture, sluggish methods of commerce, and insecurity of property exist wherever the followers of the Prophet rule or live. A degraded sensualism deprives this life of its grace and refinement; the next of its dignity and sanctity. The fact that in Mohammedan law every woman must belong to some man as his absolute property – either as a child, a wife, or a concubine – must delay the final extinction of slavery until the faith of Islam has ceased to be a great power among men. Individual Moslems may show splendid qualities. Thousands become the brave and loyal soldiers of the Queen; all know how to die; but the influence of the religion paralyses the social development of those who follow it. No stronger retrograde force exists in the world. Far from being moribund, Mohammedanism is a militant and proselytizing faith. It has already spread throughout Central Africa, raising fearless warriors at every step; and were it not that Christianity is sheltered in the strong arms of science – the science against which it had vainly struggled – the civilization of modern Europe might fall, as fell the civilization of ancient Rome”.

via Jesus and Mo.

via Jesus and Mo.