Irish court told woman ‘being forced to have abortion’ 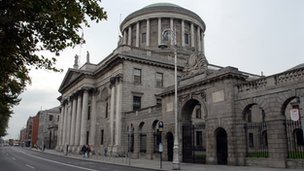 The judge has allowed time for the woman to take legal advice.

The Irish high court has been asked to order a psychiatric assessment of a young woman to establish if she is travelling to the UK for an abortion against her will.

The woman’s boyfriend claims she is being forced to have an abortion by her parents.

The judge said she would not proceed until the woman had received legal advice.

The case was adjourned until Friday.

The boyfriend has applied for injunctions to prevent the woman from having an abortion or travelling outside the country.

He says his girlfriend’s family are unhappy with the fact she is in a relationship with someone of non-European origin.

The couple are not Irish citizens but live in Ireland.

The man’s lawyer said his client discovered that his girlfriend has been booked into a clinic in the UK and was due to have an abortion on Thursday.

In a sworn statement, the man told the court that his girlfriend was “happy to be pregnant” was looking forward to having a scan and had bought baby clothes.

The man said he had no desire to prevent her from travelling if it was of her own free will, and that a member of the girlfriend’s family had threatened to kill him if he tried to come near her.

via BBC News – Irish court told woman ‘being forced to have abortion’.