THE PACKAGE FOR A TD – 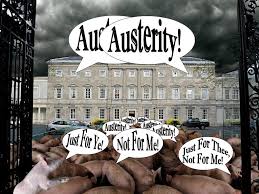 Unvouched expenses must be open to all sorts of abuse in short a laugh.

• €750 every 18 months to buy a mobile phone and car kit, including installation costs and insurance.

via THE PACKAGE FOR A TD – National News – Independent.ie.

via THE PACKAGE FOR A TD – National News – Independent.ie.

McGrath steps down as chair over new Wallace row

Mr Wallace walked into their weekly meeting in Leinster House today, even though numerous members do not want him back.

This led Mr McGrath to resign as chairman, and to walk out of the meeting. The Dublin Bay North TD had vowed to resign if Mr Wallace returned.

The Wexford TD does not need permission from the others to rejoin the group, which gives him more Dail speaking rights.

Under Dail rules, the group did not have the power to force him out in the first place, and there is nothing they can do to prevent him from rejoining. He initially left when controversy over his tax cheating first erupted in June.

In a statement, Mr McGrath said he is “fed up” with Mr Wallace.

“I am also appalled at the procedures in Dail Eireann, where rules force a group of Independent TDs to have a member that the vast majority don’t want,” Mr McGrath said.

He also took issue with Mr Wallace’s recent comments on loyalty within Leinster House, asking: “Loyalty to what? Tax evasion?”

via McGrath steps down as chair over new Wallace row – National News – Independent.ie.

via McGrath steps down as chair over new Wallace row – National News – Independent.ie.