So What is Neoliberalism all About? 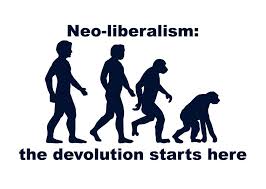 –controlling the economy by shifting from the public sector to the private sector;

–the reduction of deficit spending;

–reforming tax law often by lowering taxes for the wealthy while spreading the tax base;

–opening up markets to trade and limiting protectionism; 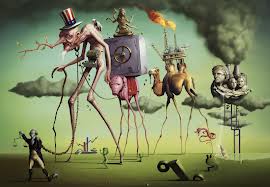 Artist Clark Stoeckley, the owner of the mobile performance art piece known as the WikiLeaks truck, is one of a handful of activists and reporters that consistently attend Bradley Manning’s trial, which resumed today. Even so, guards at Fort Meade weren’t sure what to think when earlier today Stoeckley cruised up to the base in his truck.

“Dressed as a redneck, I went up to all of the NSA and Army guys photographing “What the Hell is up with this truck?” tweeted Stoeckley, along with a photo of one agent. “They were dumbfounded.”

Given that the US military has banned army personnel from looking at anything related to WikiLeaks, it’s no surprise that military personnel may have been unsure how to deal with a guy driving up in a WikiLeaks box truck. One blogger has called Stoeckley’s constant presence at Fort Meade a “symbolic slap in the face,” and it’s clear he’s at least made his presence known. Earlier this month, canine units searched his truck before Stoeckley was given permission to park on the base, and whenever he enters or leaves the base he is accompanied by a police escort.

In a brief phone interview, Stoeckley explained that the army personnel “descended on the truck” following a “change of command ceremony.” He then proceeded to “play with them” by asking them seemingly naive questions like “What is this about?”

“They were like, ‘It’s the Manning trial, and I was like, ‘Who is Manning?’” laughed Stoeckley. “Some were laughing, some were pissed, and it was really confusing to them why my truck was on the base and how it got there,” he added. “It was the topic of conversation while they were going back to their cars.”

Besides giving rides to activists from New York City to Fort Meade, Stoeckley also draws the courtroom proceedings and uploads them to Flickr, making him a well-known fixture at Manning’s trial. In fact, he announced his illustrations and first-hand accounts would be published in a book to be released this upcoming October.

Dealing with authorities while driving around in his truck is nothing new for Stoeckley. Back during the height of Occupy Wall Street, Stoeckley’s truck was seized, searched and temporary lost by police, for example.

As of this writing, Stoeckley’s truck is still rustling the jimmies of guards and NSA guys at Fort Meade. And so far, Stoeckley’s seemingly gentle trolling of Fort Meade appears to be a healthy give-and-take between the artist and law enforcement: While speaking to me over the phone, an officer was writing Stoeckley a ticket.

By Fruzsina Eördögh 10 hours ago

via The WikiLeaks Truck Is Still Rustling Jimmies at Bradley Manning’s Trial | Motherboard.

Scientists have finally pinpointed the exact location of Hell thanks to help from the Dalai Lama.

Despite years of searching for its location by theologians and scientists alike, Hell had never been found until the Dalai Lama today described his Tibetan homeland as, “Hell on earth.”

This discovery has shocked many observers, as the general consensus had been that Hell on earth was somewhere in the Thames Valley, near Slough.

Though scientists are excited by the find, many theologians have expressed concern over the lack of fiery brimstone and tortured sinners which had previously acted as a deterrent for would-be wrong-doers.

“I am a bit disappointed to be honest, yes.” said the Bishop of Caldecott.

“If you look on Flickr, Tibet actually looks quite nice.  I’m not sure this is going to put people off killing, thieving and coveting their neighbours oxen.”

The discovery has shocked many of Tibet’s recent visitors.

“I was in Tibet a couple of months ago and didn’t see any dead evil people,” said Shane McDonagh, a backpacker from Australia.

“Do you think Hitler and Saddam Hussein had a religious conversion at the last minute and saved themselves?  That’d be a bit unfair, wouldn’t it?”

With Hell now safely marked on the world’s maps, the hunt is now on to find Heaven, with persistent rumours of it being on the Girls Aloud tour bus still unfounded.