Bradley Manning is a hero, not enemy of the people 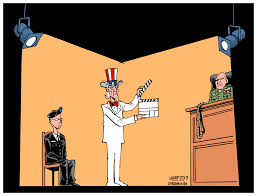 Whistleblower Bradley Manning is now on trial. Military prosecutors are pursuing the charges of aiding the enemy, violation of the Espionage Act, and “putting the lives of fellow soldiers at risk.” Likely sentence: life in prison, but the death penalty is possible.

A strong message is being sent by the Obama Administration: repress dissent, stifle critique, and punish those who challenge the prerogatives, or expose the crimes of the powerful. The assault on democracy continues apace.

Manning is accused of sending classified files (none “Top Secret”) and videos, including the infamous “Collateral Murder” video, to Wikileaks. Some of the material contains heart-wrenching evidence of war crimes (a small trove in a mountain of war crimes perpetrated). Soldiers are under a legal obligation to report war crimes. Manning upheld that duty.

An Apache helicopter gunship kills 12 civilians (including two AP reporters) and wounds two children, then fires on and kills those trying to rescue the wounded. A tank drives by and cuts a body in half. In mockery, the killers laugh. That is the “Collateral Murder” video (CMV). Watch it and scream. These are war crimes, three among thousands, many far worse.

These war crimes follow from what at Nuremberg was called “The Supreme International Crime,” i.e. the crime of international aggression, for which no U.S. leader has been held legally accountable. The U.S. president is therefore not upholding his Constitutional obligation to enforce the law. We should note it is the leaders (the planners and perpetrators of aggression) who “put the lives of soldiers [and civilians] at risk.”

The assault on democracy continues apace.

Manning is accused of “aiding the enemy” and there is truth in the accusation when we understand that the real enemy of (and only real threat to) destructive U.S. power is the people of the U.S. Manning aided the people in gaining wider knowledge and a clearer understanding of the mass horrors and egregious destruction imposed on the Iraqi people by U.S. power.

In short, Bradley Manning aided democracy, and will likely be punished severely for it. The victims of U.S. crimes in Iraq already know those crimes, so that “enemy” is not aided by repetitive information. Those aiding the so called “enemy” are the originators and perpetrators of the crimes: the aggression, the missile strikes, the drone strikes, the torture, and renditions, etc.

“Every violation of the law of war is a war crime” (U.S. Army Field Manual). The “law of war” contained in the Geneva Conventions tells us that making the civilian population the object of attack is a grave breach. The CMV reveals a vicious breach.

Harming those caring for the wounded violates Common Article 3 of the Geneva Conventions: “No one shall be harmed . . . for such humanitarian acts.” The Apache helicopter in the CMV fires on and kills civilian rescuers.

A soldier’s obligation to report violations of the “law of war” is enshrined in the “US Army Subject Schedule.” The Uniform Code of Military Justice places soldiers under a duty to refuse to obey unlawful orders. Therefore, an order to suppress clear evidence of war crimes is an unlawful order. In essence, Manning is accused of not suppressing the evidence. By following his legal (and moral) obligation he is accused of illegal action.

Imagine the U.S. under monstrous attack by a massive superpower carrying out egregious war crimes against us, killing and maiming millions, and destroying much of our society. Then, imagine a brave soldier inside that “other” superpower releasing documents to the public to educate them about the atrocities being perpetrated against us with the hope that the revelations might assist in stopping the brutality and suffering. Would we laud that soldier as a great hero or denounce them as a criminal?

Manning believed his heroic actions would assist in helping the people of the U.S. both understand the situation of the Iraqi people and also reconsider the systemic and serial nature of U.S. power’s aggression against other countries and people.

But truth-tellers in criminal enterprises, in a world of systemic deceit, surveillance, and misinformation, are always a threat. Again, the real enemy in a warfare state is democracy, i.e. the people. It is a lesson for all.

Doug Morris grew up in Harrisburg and now teaches at Eastern New Mexico University.He spends summers and holidays in Mechanicsburg. Readers may e-mail him at dmorrisscott@yahoo.com.

via Bradley Manning is a hero, not enemy of the people: As I See It | PennLive.com.