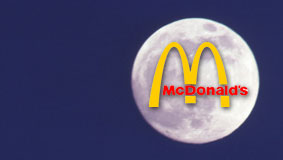 After plans were announced for private investment to be the driving force for a return to the lunar surface, speculation has grown that advertisers could be on the verge of putting the first corporate logo on the moon.

Depending on how many customers sign up, the first mission could be ready to fly by 2020, and speculation about which corporations would be looking to get on-board has already begun.

The Moon, which could be renamed the Sports Direct Natural Satellite, has not been visited by Earthlings in forty years.

With the possibility of popular album and song titles being changed to ‘Walking on the Coca Cola Lunar Globe’ and ‘Dark Side of the McDonald’s McMoon’, some critics have warned that the involvement of private investment could transform the moon into an orbiting billboard.

“I don’t want to look through my telescope and see a Nike swoosh in the night sky.”

Golden Spike president, Alan Stern, Nasa’s former associate administrator for science revealed that they would need to sell “a bunch” of missions to turn a profit.

“We would welcome investment from any number of sources and that would include corporations,” he admitted.

“If these missions prove successful then hopefully we can expand sponsorship deals beyond the moon.”

“It could be a small step for man, a giant leap for GlaxoSmithKline.”

via Private investors announce plans to put first corporate logo on the moon.

via Private investors announce plans to put first corporate logo on the moon.