The Cabinet of the Irish Government agreed this week to pursue religious orders for payment of the remaining €250 million needed to make up their half of the cost of €1.46 billion compensation promised to victims of horrific ill-treatment in orphanages, schools, borstals and other institutions run by Catholic monks and nuns. The amount was revised upwards from €1.36 billion after more victims came forward.

Education Minister Ruairi Quinn has been given the task of extracting the money from the orders.

The congregations of priests and nuns initially offered just €128 million in cash, property and counselling services as part of a controversial indemnity deal dating back to 2002. Only €106 million of this was ever realised.

Four of the eighteen orders named in the Ryan Commission that investigated the decades of abuse that was perpetrated have said they are willing to consider transferring more school buildings and other educational infrastructure on top of what has been offered.

Mr Quinn said: “The Government is obviously disappointed that the congregations have not agreed to a 50:50 share of the very considerable cost for redress. This decision represents the most pragmatic way to maximise the level of contributions to be made by the congregations and the management bodies so that the taxpayer does not bear an unreasonable burden of the costs.” 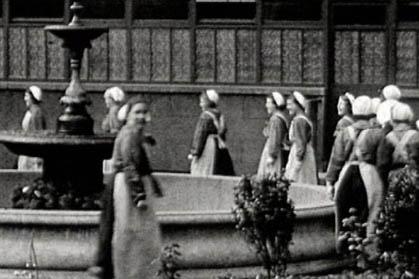 Girls in the grounds of a Magdalene Laundry. The Irish government is set to pay $45 million to the victims of these Catholic institutions.

The four religious congregations that ran the Magdalene Laundries have announced they will not contribute to the compensation fund for victims.

The Mercy Sisters, the Sisters of Our Lady of Charity, the Sisters of Charity and the Good Shepherd Sisters have informed Minister for Justice Alan Shatter in recent days that they will not pay into the fund, the Irish Times reports.

However the religious orders said they were willing to cooperate fully with other recommendations made by Mr Justice John Quirke.

In his recent report Quirke recommended that the Irish government pay at least €34.5 million ($45 million) in restitution to laundry survivors.

A spokesperson for Shatter said he was ‘disappointed’ with the decision of the religious orders.

Taoiseach Enda Kenny has called on the four religious orders to “reflect” on their refusal to pay into the. redress scheme.

“I cannot force them to, because the scheme was not designed on that basis,” he said.

“The bottom line is these four religious orders, and the State, were responsible for the effective wrongful incarceration of girls and women who were forced to work for no pay within a brutal regime.

“Agreeing to merely hand over records and look after elderly residents who gave their lives to the laundries falls far short of what is expected by way of a contribution from the religious orders,” the Sinn Fein Deputy added.

Meanwhile controversial Catholic League president Bill Donohue has argued that the laundries were a myth.

“[T]here was no holocaust, and there was no gulag,” he writes in a special report titled “Myths of the Magdalene Laundries.”

“No one was murdered. No one was imprisoned, nor forced against her will to stay. There was no slave labor. Not a single woman was sexually abused by a nun. Not one. It’s all a lie.”

Donohue agreed that the working conditions in the laundries were “harsh,” and that they included “standing for long hours, constantly washing laundry in cold water, and using heavy irons for many hours.”

However he doesn’t believe that qualifies as slave labor.

“Drudgery? Yes,” he writes. “But if this is ‘torture,’ then it is safe to say that millions have suffered this fate without ever knowing they did.”

Nuns say they will not pay Magdalene compensation 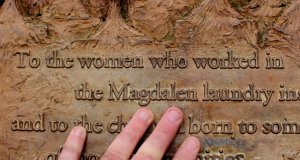 The four religious congregations that ran the Magdalene laundries have told the Government they will not make any financial contribution to the multimillion-euro fund set up to recompense former residents.

The Mercy Sisters, the Sisters of Our Lady of Charity, the Sisters of Charity and the Good Shepherd Sisters have informed Minister for Justice Alan Shatter in recent days that they will not pay into the fund, which could cost up to €58 million.

However, it is understood they have said they are willing to assist fully in all other aspects of the package recommended by Mr Justice John Quirke in his recent report, including the assembly of records and looking after former residents who remain in their care.

A spokeswoman for Mr Shatter said he was “disappointed” with the decision of the four orders not to make a financial contribution.

He will brief his ministerial colleagues about the situation at the weekly Cabinet meeting this morning.

Three of the four orders contacted through a spokesman were not prepared to make any comment at this point in time.

The Government announced the scheme last month after Mr Justice Quirke had conducted an examination of the various options to compensate the women who lived in the laundries, many of whom are now elderly.

The minimum payment was €11,500 for women who spent three months or less in a laundry and the maximum approved was €100,000 for those who were residents for 10 years or more.

Groups representing the women argued that higher awards should have been made available to those who had been long-term residents.

There was no onus on any applicant to show they had suffered hardship, injury or abuse. Some 600 women are reckoned to be eligible. The scheme is expected to cost between €34.5 million and €58 million.

When the scheme was announced, Mr Shatter said taxpayers expected the four religious orders to share the burden and make a contribution to the scheme. He would not be drawn on the amount he expected them to contribute.

The scheme follows on from a full apology on behalf of the State made to the survivors by Taoiseach Enda Kenny in the Dáil this year, in which he said that nobody should have been subjected to the conditions they endured.

That apology came in the wake an investigation by former senator Martin McAleese into the running and conditions within the laundries which were in operation for the best part of a century.

The report also established that the State had played a significant role in the continued operation of the laundries.

Orders ‘made lots of money’ from laundries

Orders of nuns involved in the operation of the Magdalene Laundries have been urged by TDs to make a contribution to a survivors’ compensation fund.

Labour TD, Eamonn Maloney, said he did not accept the finding in the report on the laundries by Martin McAleese that they did not make money from the free labour of women and girls who worked in them.

“They did make money, they made lots of money,” he said during Dáil statements on the report, adding that most commercial laundries in the 1940s and 1950s closed because of competition from the Magdalenes.

“Not only has the church as yet to apologise for their role in operating these prisons, they do also have a role — because they made money — in compensating people,” he said.

The Dublin South West TD added that politicians must not be afraid to “stand up and say this”.

The Government has so far refused to say what contribution, if any, it will seek from the orders.

Four religious orders involved in the running of the laundries are due to meet with Justice Minister Alan Shatter and junior minister Kathleen Lynch.

Last Friday, Ms Lynch said the question of what would be considered a fair contribution was “debatable” and she did not want to go into it at this early stage.

“The mistake that was made with the industrial schools was that the deal was done in advance of knowing what the final cost would be,” she said.

“That was a major flaw in that process. And we don’t intend to make those same mistakes again.”

Fine Gael TD Joe O’Reilly there was “no avoiding the fact that the religious orders will have to make a contribution to the final fund”.

During last night’s Dáil statements, he said that in many cases, the orders involved have to pay for nursing home fees and the expensive care of their elderly demographic, and that should be taken into account.

“But where there are assets and where there is a capacity to pay, it would be cathartic and it would be part of a recovery process for the religious orders — and a very practical identification with the survivors if they made a financial contribution,” said Mr O’Reilly.

The Cavan-Monaghan TD said it was “not sufficient that they make no input into it”.