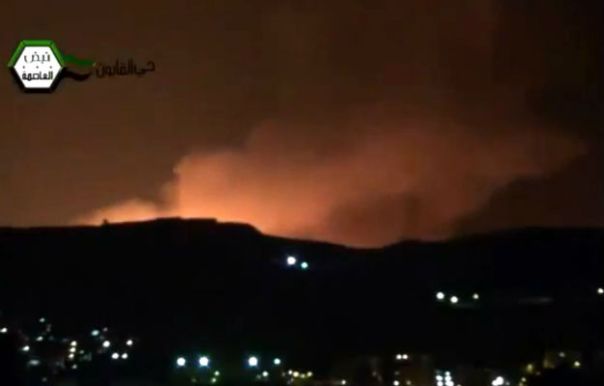 Israel‘s recent attacks against Syria are the latest, dramatic development in a conflict that is already spiraling out of control. In the past few days, Israeli aircraft reportedly targeted Iranian surface-to-surface missiles headed for Hezbollah, as well as Syrian missiles in a military base in the outskirts of Damascus. Israel’s strikes show, once again, its intelligence services’ ability to penetrate the Iran‘s arms shipment route to Lebanon and its military’s skill in striking adversaries with seeming impunity. But Israel is also risking retaliation and further destabilization of its own neighborhood — in ways that may come back to haunt it.

With much of Syria outside the control of Bashar al-Assad‘s forces, Israel is particularly wary of chemical weapons or advanced conventional weaponry falling into the wrong hands, whether it’s extremist Sunni opposition groups like Jabhat al-Nusra or, more immediately, Assad’s and Iran’s Lebanese ally, Hezbollah. The missiles Israel sought to hit in the first attack on Friday have a significantly larger payload, greater accuracy, and longer range than the bulk of the Lebanese Shiite group’s current arsenal. Contrary to the allegations of the Assad regime that claims Israel’s strikes prove it is backing the opposition, Israel is not throwing its weight against Assad. Indeed, Israel’s latest strikes represent the latest in a long-standing policy of denying the transfer of arms that could alter the balance of power between Israel and Hezbollah — weapons systems such as advanced Russian surface-to-air missiles; the Iranian-made Fateh 110 surface-to-surface missiles (reportedly targeted this weekend) that would significantly increase Hezbollah’s threat to northern Israeli cities; or additional surface-to-sea weaponry, such as the kind successfully used against an Israeli ship in July 2006.

More broadly, the Israeli strike is meant to disrupt the Iran-Syria-Hezbollah nexus. Iran has long provided Hezbollah with hundreds of millions of dollars (the exact amount is unknown and probably fluctuates considerably) and a wide range of weaponry, including anti-tank missiles and long-range rockets. Since Hezbollah’s birth in the early 1980s, Syria has served as intermediary, allowing Iranian forces to deploy within Lebanon and serving as a transit point for Iranian weapons — something Hezbollah’s Lebanese opponents have complained about, as well as Israel.

The strikes are a gamble, however, for three main reasons. The first bet is that Syria will not respond. Israel has long been a whipping boy for Arab regimes short on domestic credibility: it’s not hard in this part of the world to paint any opponents as Zionist stooges. Bashar, like his father Hafez before him, backed Hezbollah, Hamas, and other terrorist groups in the name of the “resistance,” hoping to win points at home and throughout the Arab world — while distracting attention from his tyranny and economic failures. Indeed, early in the Syrian uprising, the Assad regime tried to create a crisis by pushing Palestinian refugees living in Syria to return to Israel  to divert attention from the crackdown. This failed, but the Israeli strike offers a chance to try again.

Israeli leaders, however, believe that this playbook is dated. When Israel hit the Syrian nuclear reactor in 2007, Assad and his cronies remained mum and did not retaliate. Today, Israeli strategists are gambling that Assad is too embattled to risk escalation. His military forces are weak and overstretched already, facing fierce domestic opposition with no effective airpower. Further losses to Israel and its air force would deprive the regime of desperately needed elite forces. Indeed, Israel seems rather sure of itself: as the smoke was still clearing, Prime Minister Benjamin Netanyahu projected business as usual, departing on a state visit to China.

Perhaps even more important, if Assad tries to use Israel as a foil he risks further losses, which would be politically humiliating and potentially extremely damaging for a regime that is already on a knife’s edge. The Israeli strikes show that it can violate Syrian sovereignty with impunity, and the Syrian opposition is now charging that Assad has repeatedly failed to protect Syrian soil from Israel. The Syrian Opposition Council, a leading opposition political grouping, is trying to play the Israel card itself, noting that it “holds the Assad regime fully responsible for weakening the Syrian army by exhausting its forces in a losing battle against the Syrian people.” Meanwhile, the remaining nationalists in the Syrian military resent this embarrassment, risking Assad further defections and desertions.

JERUSALEM—As an uneasy truce between Israel and Hezbollah continues, millions of average men and women in the Holy Land are turning to the one simple comfort that has always seen them through the darkest days of their troubled history: the steadfast guidance of their religious faith.

Arabs and Israelis alike are embracing their faith as a way to make sense of the violence from which there seems to be no escape.

“I take solace in knowing that my faith is a sanctuary, an escape from the bloodshed and turmoil,” said Haifa resident Yigal Taheri, who last week lost his wife and newborn daughter when a Fajr-3 long-range rocket launched by Lebanese militants struck the synagogue where his family was attending services. “YHWH, Elohim, whatever you wish to not call Him—His love comforts all those who are willing to open their hearts to Him. Praise be to G–d.”

“Religion is the one thing that has never let us down,” Taheri added over the low rumble of AK-47 fire emanating from the nearby home of a radical Israeli rabbi.

Taheri is not alone. In a time of seemingly unending conflict between Israelis and Arabs, a growing number of Middle Easterners are fervently embracing the unshakeable wisdom of Judaism and Islam.

Palestinian Omar Abdel-Malik, a resident of the Gaza Strip town of Khan Younis, credits his Islamic beliefs for preserving his sanity.

“The Israelis have fired missile upon missile on my neighborhood, but it has only made my trust in Allah that much stronger,” Abdel-Malik said. “I cringe to think where the people of the Middle East would be right now if it weren’t for our steadfast belief in one true, merciful, and loving Supreme Being.”

Palestinian widow and mother of three Dareen Idriss agreed, citing the healing power of prayer as a way to cope with the relentless slaughter she and her family witness every day. “When the children cannot stop crying because of the bombs, we all gather our families in the rubble of the mosque to pray for justice,” Idriss said. “During this calm meditation, we also pray for the annihilation of the Hebrew race.”

An unidentified Palestinian man seeks a renewed resolve through prayer.

West Bank settler Ari Chayat, whose neighborhood has also been ravaged by violence, echoed this profound reliance on faith. “The world is so brutal and unfair,” Chayat said. “Many days, my uncompromising belief in a vengeful creator is all that gets me out of bed in the morning.”

“If it wasn’t for my faith that the God of Abraham has given these lands to Jews and Jews alone by divine decree, I probably wouldn’t even be here today,” Chayat added.

Lebanese militant Jawad Hamid, who recently lost his best friend to an Israeli helicopter attack while the two men were on their way to pick up a Katyusha rocket, said his faith in Allah was the only way he could cope with the tragedy.

“Every time I want to give up hope, I just open the Quran to my favorite passage, Surah 2:194: ‘Whoever acts aggressively against you, inflict injury on him,'” Hamid said. “Whenever I read those words, I am immediately filled with inspiration and a renewed sense of purpose.”

Even political leaders have tapped into the public’s reliance on religion and used it as a way to encourage them to never give up.

“In this time of strife, the only way to endure the unending suffering is through an unwavering, uncompromising faith in one’s religious beliefs,” Israeli hard-liner Benjamin Netanyahu said Monday. Hezbollah leader Hassan Nasrallah went so far as to quote from the Quran in a speech delivered to followers the same afternoon.

“It’s always frightening to be reminded of your own mortality, as we all were this past Tuesday, Wednesday, Thursday, Saturday, and Sunday,” Hezbollah commander Mahdi al-Zaidi said. “But rather than react irrationally, I looked deep within my faith, consulted the Quran, and by the mercy of Allah, I gained the resolve to oversee a massive airstrike against the enemy.”

“We will get through this, so long as we have God on our side,” he added.


From humble origins he rose 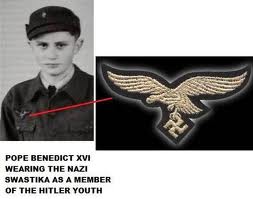 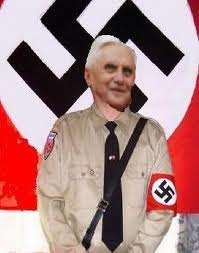 Q: Why did Pope Benedict XVI, who was once part of the Nazi Youth, condemn Israel for attacking Hezbollah?

A: Because the Middle East problem needs to be solved and when Jews defend themselves, it takes longer to find a final solution! 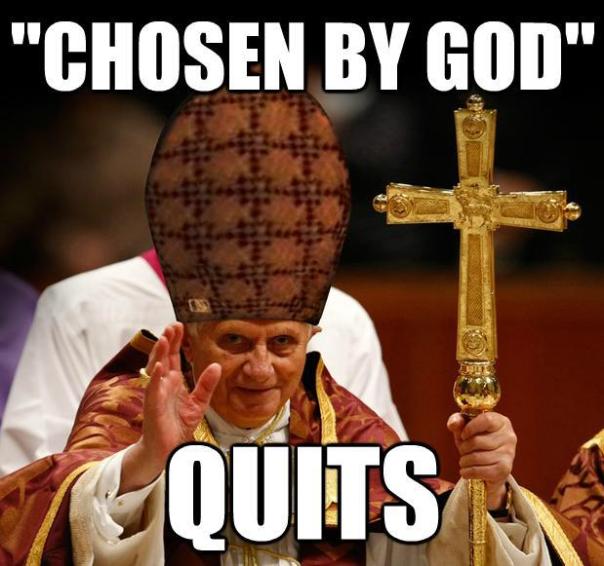 Being ‘The Pope‘ means you are married to God. So, is this like a divorce?” … Ricky Gervais, 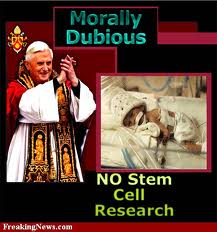 Q: Why was Pope Benedict XVI not allowed to fly into the United States?

A: He wanted to bring more than 3 oz of holy water with him! 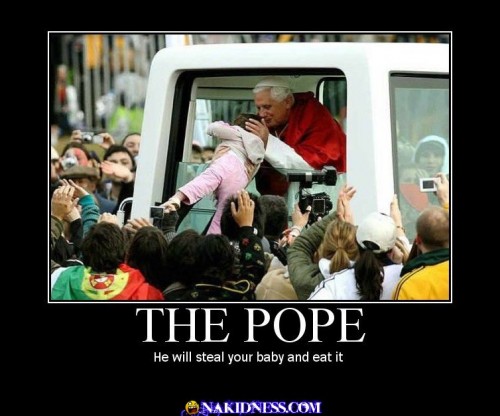 Q: What did the Pope say to the woman who jumped over barricades, tackled the pope, and fell on top of him?

Q: What does the Pope say to young boys at communion?

A: You can’t squeal on me with your mouth full, can you!

Q: What can you infer after hearing that Pope Benedict XVI had surgery on his wrist after falling at a Alpine vacation chalet?

A: Altar boys are fighting back!

“The Pope is retiring due to ‘lack of strength’. This must be in reference to how he handled the pedophilia scandal.”…Jim Norton

“Call me crazy, but I think the next Pope should be someone who didn’t help cover up child rape. Tho,that may disqualify every single cardinal.” …Chris Hayes 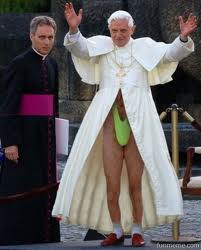 Q: What new Hollywood film is Pope Benedict XVI promoting while he is in the United States? 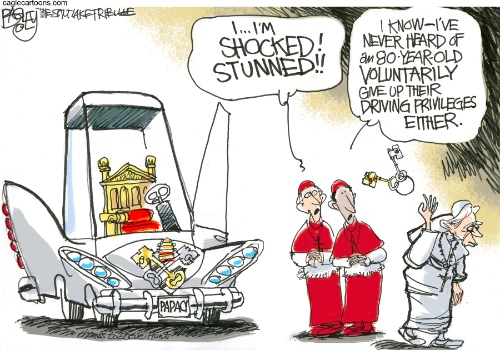 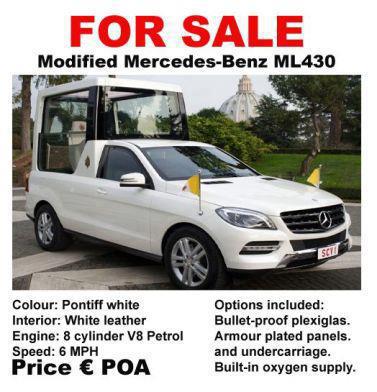 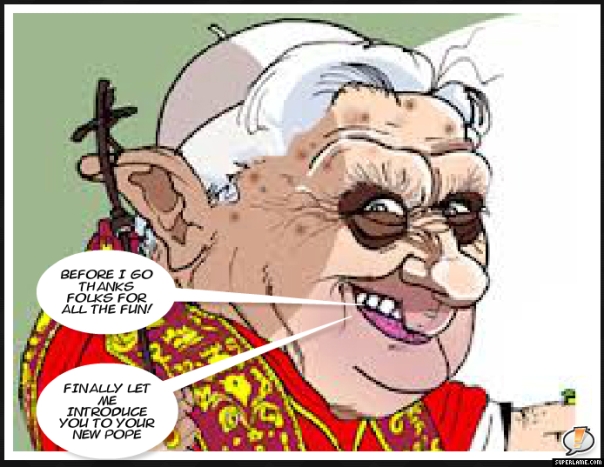 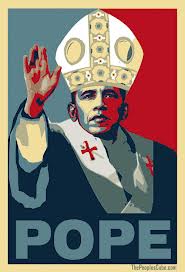