Industrial action in the health service and other parts of the public sector is now threatened following the collapse of the proposed new Croke Park deal.

The country’s largest public service union,SIPTU, which includes 45,000 health service workers, has rejected the ‘Croke Park 11’ proposals by a margin of 53.7% against and 46.3% in favour.

The Irish Nurses and Midwives Organisation (INMO) also rejected the deal today, with a 95.5% vote against it.

The SIPTU vote, however, is expected to lead to the collapse of the Croke Park Deal extension proposals, as they cannot be sanctioned by the Irish Congress of Trade Unions (ICTU) without the support of SIPTU, which is the largest union in the country.

The IMPACT union, which also represents health service workers, has voted by 56% to 46% to accept the new Croke Park deal.

The Government may now move to legislate for the implementation of pay cuts in the public sector in the absence of overall union agreement on the Croke Park proposals. This would put the Government on a collision course with the unions.

Commenting on the result, SIPTU General President Jack O’Connor said that the vote reflected the sense of grievance among working people and public service workers, in particular, ‘that they are carrying an excessive burden in the post-crisis adjustment.’

SIPTU and the INMO urged the Government not to legislate for pay cuts. The INMO said this would ‘inevitably result in major disagreement and a potential dispute.’

The HSE needed to save €150 million this year from planned pay savings under the Croke Park deal in order to stay within budget.

The health executive’s latest performance report says this sum had yet to be allocated to its budgetary calculations pending the outcome of the public service pay agreement extension.

In the absence of these pay savings, the HSE may be forced to cut services to balance its books.

The ‘Croke Park 11’ measures included pay and allowance cuts of between 5.5% and 10% for those with salaries above €65,000 -and the reduction of premium rates for staff working on Sundays from double time to 1.75 times the normal hourly rate.

Other overtime rateswere to be cut to time and half for those on less than €35,000 and time and a quarter for those earning more than €35,000. Staff currently on a 39 hour week would do an unpaid hour’s overtime.

The deal provided for a three year increments freeze for staff earning more than €65,000, those earning below €35,000 faced a three month increment freeze, while those paid between €35,000 and and €65,000 faced two three-month freezes.

The Teachers’ Union of Ireland has voted overwhelmingly to reject the Croke Park II proposals.

It is the first completed ballot on the deal.

The TUI represents just under 15,000 second level teachers and lecturers.

Traditionally, if a majority of ICTU unions accept a deal like Croke Park, those who reject it abide by the majority vote.

However, the TUI executive has decided not to be bound by an overall vote in favour.

TUI President Gerard Craughwell said this could pose a huge problem for the Irish Congress of Trade Unions – particularly if other unions opposed to the Croke Park extension plans follow the TUI line and refuse to accept the majority vote.

The proposals in the Croke Park deal are aimed at reducing the public sector pay bill by an additional €1 billion over the next three years.

WHY YOU SHOULD MARCH ON 9TH FEBRUARY 2013

WHY YOU SHOULD MARCH ON 9TH FEBRUARY 2013

The banking collapse has left the average EU citizen with a bill of €192. Bad enough you might think until you consider that the average Irish citizen will have to cough up €9,000 to rescue the banks. That’s right; it’s not a misprint; there’s not an extra zero in there.

That’s what makes Ireland the “special case” we so often hear about.

That’s why there are protest marches on 9th February.

That’s why you should be there.

Because despite pious platitudes that Ireland is a special case the EU has decided that the European banking crisis must be dealt with by each individual country regardless of size or ability to pay. So much for the idea of a community!

Ireland makes up just 0.9% of the EU population, and the Irish economy makes up 1.2% of the EU’s GDP. But even though we are a tiny part of the EU we have to cough up 42% of the European banking crisis.

All in all the banking bailout is set to cost us €64bn.

Trying to pay this €64bn bank debt is behind five years of austerity.

Trying to pay this bill is costing jobs and driving thousands to emigrate.

Trying to pay this bill is behind increased taxation and more threatened wage cuts.

After five years of austerity we all know that without a bank deal there is no hope of recovery and that continuing with this failed policy will cripple Ireland for generations to come.

We must send a clear message across Europe that we need a deal on debt.

The ICTU Rallies on February 9th 2013 are your chance to send that message and to protest against the cause of our economic crisis – bank debt. A large turnout will show the EU leadership the depth of feeling in Ireland about the issue.

Marches on the afternoon of 9th February are planned in:

Older people are suffering the ill effects of the cutbacks

Older people are suffering the ill effects of the cutbacks and they stand in solidarity with their children & grandchildren who are also suffering. 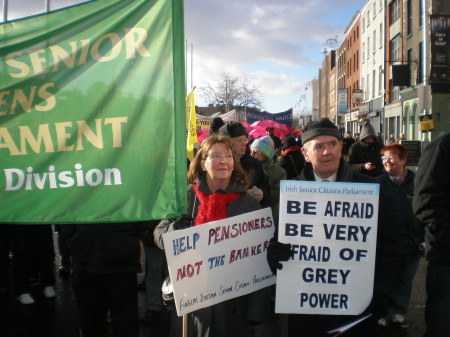 This is why the Irish Senior Citizens Parliament will proudly march alongside trade unions and other community groups before Budget 2013 on Saturday next to say “No to Austerity”. We are asking all our members around the country to walk alongside us with dignity & respect to show the Coalition government that we have had enough of the recession, enough of the cuts to income and enough of the threats to the travel pass. The last Budget saw a vicious cut to the means tested fuel allowance thus increasing fuel poverty.

So walk alongside us … but wrap up warm with good shoes and scarves and gloves. This time however we want you to wear different shades of grey to symbolise the many hits we’ve taken. But we are not without hope – wear a sprig of green as well to show that we still have hope. And what about some “Greys in Shades” – wear some sunglasses as well.

Lastly what about some placards? We’ll have some but we encourage you to make your own & bring them with you. Your own words are always best but here are some possible slogans you could have on your placards:

We’ve paid for our Pensions

For a proper health service

Fair Pensions for all

For a better, fairer old age

A Fairer Ireland for Older People

Hit the bankers – Not the pensioners

We all stand together

Hands off our Pensions

We’ve paid for our pass

We’re all in it together

Why not just shoot us?

Never too old to suffer

No Country for Old Men … or Old Women

March is to be held on the 27th Nov

In the year 2012, the Lord came unto Noah, now living in Ireland, and said: Once again, the earth has become wicked, and I see the end of all flesh before me.

Build another Ark and save two of every living thing along with a few good humans.

He gave Noah the blueprints, saying you have six months to build the Ark before I send unending rain for 40 days and 40 nights.

Six months later, the Lord looked down and saw Noah weeping in his yard – but no Ark.

I am about to start the rain! Where is the Ark?

I have been arguing with the inspector about the need for a sprinkler system.

My neighbours claim that I have violated zoning laws by building the Ark in my yard and exceeding the height limitations. We have to go to an appeal’s tribunal.

Then the Department of Transport demanded I post a bond for the future costs of moving power lines to reach the sea.

I told them that the sea would be coming to us, but they would hear nothing of it.

Getting the wood was another problem. There is a ban on cutting local trees in order to save the red squirrel.

I tried to convince the environmentalists that I needed the wood to save the squirrels – but no go!

When I started gathering the beasts, an animal rights group sued me.

They argued the accommodations were too restrictive, and it was cruel and inhumane to put so many animals in a confined space.

Then the EPA ruled that I could not build the Ark until they had conducted an environmental impact study on your proposed flood.

I am still trying to resolve a complaint with the ICTU over using Polish carpenters on my building crew.

Now immigration is checking the status of all the people on the job.

The trades unions insist that I hire only Union workers with Ark-building experience.

To make matters worse, NAMA seized all my assets, claiming I am trying to leave the country illegally.

So, forgive me Lord but I need at lest ten years to finish this Ark.

Suddenly, the skies cleared. The sun began to shine, and a rainbow stretched across the sky.

Noah looked up in wonder and asked, ‘You mean you’re not going to destroy the world?’

Your Blue Blouse/Marxist Government beat me to it.