Something to Think About – Banking

If the American people ever allow private banks to control the issue of their  currency, first by inflation, then by deflation, the banks…will deprive the people of  all property until their children wake-up homeless on the continent their fathers conquered…. The issuing power should be taken from the banks and restored to the people, to whom it properly belongs. – Thomas Jefferson in the debate over the Re-charter of the Bank Bill (1809)

“I believe that banking institutions are more dangerous to our liberties than standing armies.” – Thomas Jefferson

The case of a military whistleblower highlights the US’s changing attitude to secrecy.

Bradley Manning deserves the Presidential Medal of Freedom.” The opening of Chase Madar’s book leaves us in no doubt as to the author’s view on his subject: whistleblower Bradley Manning, the man said to have supplied half a million classified documents to WikiLeaks.

For Madar, a New York lawyer, the line is more than a rhetorical flourish. The US awarded the Presidential Medal, the country’s highest civilian honour, to most of the principal players behind the Iraq War, including Tony Blair and John Howard. In other words, those who misled the public into a disastrous invasion were decorated – but Manning faces life in jail for revealing the truth about what the conflict entailed.

‘I prefer a painful truth over any blissful fantasy.’ Bradley Manning

In part, The Passion of Bradley Manning can be read as a biography. Manning, a talented but troubled computer geek, enlisted in the army (perhaps because of an unhappy relationship with his father) and, despite struggling as a recruit, somehow ended up an intelligence analyst in Iraq.

In that capacity, he investigated 15 men detained by the Iraqi federal police for printing ”anti-Iraqi literature”. But the material that brought them into Iraq’s notorious jails proved, on further inspection, to be merely an expose of Iraqi government corruption, entitled Where did the money go?.

Yet when Manning reported the injustice to his superiors, he was told to ”shut up and explain how we could assist the FPs [police] in finding more detainees”.

Though he was bullied for his slight stature and his homosexuality, Manning’s disenchantment with the war stemmed from politics, not personality or psychology. He had access to evidence of atrocities, such as the footage later released as ”Collateral Murder” – a clip of a helicopter gunship killing civilians. As he asked during an online chat with a hacker named Adrian Lamo: ”[If you] saw incredible things, awful things … things that belonged in the public domain and not on some server stored in a dark room in Washington, D.C. … what would you do?”

Lamo supplied his answer by turning Manning in to the authorities.

Alongside its biographical details, The Passion of Bradley Manning tells another story, a history of secrecy’s spread. For the American founders, democracy necessarily meant that the people knew what their government did. The former US president James Madison put it like this: ”A popular government, without popular information, is but a prelude to a tragedy or a farce, or perhaps both.”

Today, however, secrecy seems an end in itself – so much so that documents pertaining to Madison’s own administration (he left office in 1817) still remain under wraps.

The officials responsible for US information security classified almost 77 million documents in 2010 and 92 million in 2011, while President Obama, who campaigned as an ally of whistleblowers, has actually prosecuted more leakers under the Espionage Act of 1917 than all his predecessors combined.

Naturally, with the security state so large, leaks happen all the time – about 3 million Americans have access to classified documents. But the reaction to breaches depends largely on who’s responsible.

For instance, material classified as top secret – a higher rating than anything Manning allegedly released – frequently finds its way into books by insider journalists of the Bob Woodward variety. Stories in The New York Times and elsewhere quote ”unnamed officials” on sensitive military matters. Such leaks are often sanctioned at the highest levels. Obama’s chief of staff William Daley has, for instance, casually discussed how he and his predecessors give secret material to the press when that information makes the administration look good.

”I’m all for leaking when it’s organised,” he said.

Forty years ago, Daniel Ellsberg released details about the US war in Vietnam in the so-called ”Pentagon Papers”, all of it more highly classified than anything WikiLeaks has published. Yet Ellsberg is a free man while Manning is quite likely to stay in prison for the rest of his life. What’s the difference?

Madar suggests Manning’s case reflects a changing political climate. The Pentagon Papers came out at the high-water mark of US liberalism. Today, tolerance for dissent has become much lower.

US officials have acknowledged on several occasions that WikiLeaks has not cost a single American life. Yet, since his arrest, Manning has been held in solitary confinement under extraordinarily degrading conditions (he is kept naked at night and, because he is classified as a danger to himself, he must respond every five minutes to the guard’s inquiry: ”Are you OK?”).

On the one hand, Madar says, this cruelty reflects a degradation of judicial norms during the war on terror, a period in which assassinations, coercive interrogations and the like have been normalised.

More worryingly, it also mirrors deeper problems within the conventional US justice system, where the vast penal apparatus keeps prisoners in appalling conditions for years on end. One human rights lawyer discusses how prisoners in Guantanamo might be well advised to accept 10 years in the communal wing of that facility rather than three years in solitary at an American supermax prison.

For Madar, that’s why Manning is so important. His disclosures matter because Americans remain ignorant about what’s done in their name, whether in the bowels of high-security prisons or in the streets of Baghdad.

”I prefer a painful truth over any blissful fantasy,” Manning said during his web chat with Lamo.

His fate now depends on how many others feel the same way.

THE PASSION OF BRADLEY MANNING 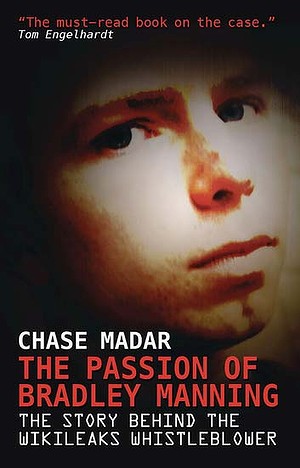 via The good soldier.

via The good soldier.

Can Ireland learn from Iceland?

Icelanders who pelted parliament with rocks in 2009 demanding their leaders and bankers answer for the country’s economic and financial collapse are reaping the benefits of their anger.

Since the end of 2008, the island’s banks have forgiven loans equivalent to 13 percent of gross domestic product, easing the debt burdens of more than a quarter of the population.

“I believe that banking institutions are more dangerous to our liberties than standing armies. Already they have raised up a monied aristocracy that has set the government at defiance. The issuing power (of money) should be taken away from the banks and restored to the people to whom it properly belongs.”  – Thomas Jefferson

The island’s steps to resurrect itself since 2008, when its banks defaulted on $85 billion, are proving effective. Iceland’s economy will this year outgrow the euro area and the developed world on average, the Organization for Economic Cooperation and Development estimates.

Iceland’s approach to dealing with the meltdown has put the needs of its population ahead of the markets at every turn. Once it became clear back in October 2008 that the island’s banks were beyond saving, the government stepped in, ring-fenced the domestic accounts, and left international creditors in the lurch. The central bank imposed capital controls to halt the ensuing sell-off of the krona and new state-controlled banks were created from the remnants of the lenders that failed.

“Europe can learn from Iceland”

Iceland’s special prosecutor has said it may indict as many as 90 people, while more than 200, including the former chief executives at the three biggest banks, face criminal charges. That compares with the U.S., where no top bank executives have faced criminal prosecution for their roles in the subprime mortgage meltdown. The Securities and Exchange Commission said last year it had sanctioned 39 senior officers for conduct related to the housing market meltdown.

History records that the money changers have used every form of abuse, intrigue, deceit, and violent means possible to maintain their control over governments by controlling the money and its issuance.  – James Madison