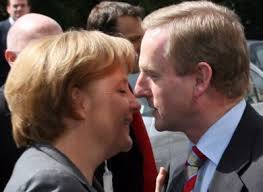 Moments after Mr Kenny declared in Brussels that he had achieved solid progress overnight at a tense EU summit, Dr Merkel moved abruptly to curtail the scope of the effort to break the link between bank and sovereign debt.

The chancellor’s intervention, which took high-level EU figures by surprise, has cast a new cloud of uncertainty over the feasibility of Mr Kenny’s demands.

For the first time in public, she backed her finance minister Wolfgang Schäuble in his assertion that national bodies must remain responsible for most banking debts.

This is markedly at odds with the push from Mr Kenny and the leaders of France, Italy and Spain for the European Stability Mechanism bailout fund to pay for historic banking losses.

The question of who takes responsibility for “legacy” banking debts has emerged as one the most sensitive issues to be settled in complex talks on the recapitalisation of stricken banks by the ESM.

Although EU leaders decided at the summit to farm out this discussion to euro zone finance ministers, Dr Merkel pre-empted these talks even though the EU leaders did not address this question at the summit.

Their focus had been on fixing a January 1st deadline for a legal agreement on new powers for the European Central Bank to supervise commercial banks, a precondition for direct ESM aid to banks.

This was a “very progressive” step forward, Mr Kenny told reporters. “So that’s good news from that point of view for Ireland and for Europe.”

It was only shortly afterwards, in a briefing room down the corridor from where Mr Kenny held his own press conference, that Dr Merkel spoke.

Answering a reporter’s question about the possibility that any ESM rescue of Spain’s banks would damage her re-election campaign next year, she ruled out the fund taking on retrospective liabilities.

“I hadn’t even thought of the elections before hearing such ideas here. The capital needs of Spanish banks have just been evaluated and a programme for their recapitalisation has been agreed,” she said.

Spain only needs to ask for the tranches of funds. There will be no retroactive direct recapitalisation, either.” These remarks were immediately seen as an implicit rebuff to the demands of Mr Kenny and his supporters for a mutualisation of banking debt.

A German government spokesman in Berlin later said her remarks were simply a reiteration of the current legal position and that there was nothing new in them; they were not about Ireland.

In Dublin, the Government spokesman also sought to play down the significance of her remarks.

“We understand that Chancellor Merkel was asked a direct question about the recapitalisation of Spanish banks and she replied in that context,” he said. His statement also noted that the pledge by EU leaders to sever the loop between bank and sovereign debt still stands.

The possibility of the ESM paying for existing bank debts is crucial for Spain, given fears that its banking crisis could overwhelm the government of premier Mariano Rajoy.

This, in turn, has prompted anxiety in France and Italy that any escalation of the Spanish banking emergency would affect them.

Top-ranked French officials said the notion of the ESM taking on historic debt was seriously in play in the wake of the summit. “The discussion we must have is to guarantee the retroactive effect of this, which is very important vis-à-vis the markets. It will take some time – weeks or months,” a senior Elysée figure said.

“It’s important to reflect on the stability of the euro zone and how to deal with this historic problem.” 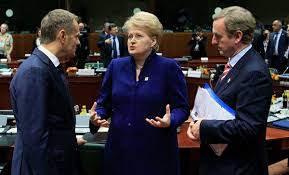 German chancellor Angela Merkel has demanded stronger central powers for the European Commission to veto national budgets that breach EU rules, risking a clash with France at a summit of EU leaders today.

Addressing parliament in Berlin hours before the 22nd summit since the start of the euro zone‘s debt crisis, Dr Merkel also sought to slow the race to create a single European banking supervisor, saying quality was more important than speed.

French president François Hollande took a very different tack in an interview with six European newspapers, warning that budget discipline alone would not solve the euro zone’s problems without doing more to revive growth. He called for greater haste in implementing a banking union.

“The topic of this summit is not the fiscal union but the banking union, so the only decision that will be taken is to set up a banking union by the end of the year and especially the banking supervision. The other topic is not on the agenda,” he said at pre-summit meeting of socialist leaders.

Dr Merkel and Mr Hollande are expected to hold a one-on-one meeting before the summit proper begins, EU officials said, which may provide a chance to discuss their differences.

Dr Merkel skirted the issue of a possible credit line for Spain, which euro zone officials expect Madrid to request within weeks, but reiterated her desire to keep Greece in the currency area despite its chronic debt problems.

In Greece, workers walked off the job for the second time in three weeks, aiming to show EU leaders that a new wave of wage and pension cuts will only worsen their plight after five years of recession.

“We have made good progress on strengthening fiscal discipline with the fiscal pact but we are of the opinion, and I speak for the whole German government on this, that we could go a step further by giving Europe real rights of intervention in national budgets,” Dr Merkel told the Bundestag lower house.

A proposal by German finance minister Wolfgang Schaeuble to create a super-empowered European currency commissioner was a possible way forward, she said, and more European control should be accompanied by a stronger European Parliament.