Is Michael Noonan the Supreme Master of Waffle?

The most brilliant response to a parliamentary question ever! 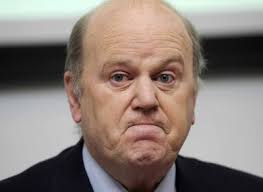 Remember the €1.1bn that AIB shoveled into its pension scheme to plug a deficit that prompted all those headlines two weeks ago? A simple question – when the banks were stress-tested in 2011, was this €1.1bn deficit identified in an exercise that cost us about €30m in consultancy fees? The short answer is no, this €1.1bn deficit wasn’t specifically identified in the final report for the stress testing but it remains unclear if a deficit of this magnitude was considered or included in either the base or adverse scenario.

But when asked* in the Dail yesterday, this is Minister Noonan’s response (I’ve read this carefully several times, and it’s still hilarious how it manages to avoid answering the question*):

Minister for Finance, Michael Noonan : The Central Bank has informed me that the Capital Requirements Directive and the Central Bank set the rules around the calculation of the applicable capital base for credit institutions. These rules include reference to defined benefit pension deficits as these can affect the capital base of regulated entities.

In a letter from the Financial Regulator to industry in 2005, banks were informed that those applying IAS 19/FRS 17 are allowed to add back to Tier 1 Capital the amount of the defined benefit pension liability that has accrued in relation to Irish pension schemes in their financial statements and to deduct an amount equal to the sum of (i) the Deficit under the Minimum Funding Requirement plus (ii) three years Supplementary Contributions. A subsequent letter issued by the Financial Regulator in 2009 amended the treatment of the Deficit under the Minimum Funding Requirement element such that credit institutions were required to include at least the Minimum Funding Requirement in its calculation of pension risk under Pillar 2 capital calculations.

The draft Capital Requirements Regulation (CRR) requires the removal of most prudential filters, including the Irish DB scheme pension filter detailed above. Article 461 of the draft CRR, relating to transitional provisions, provides for regulated entities to apply a phased approach to filters and deductions “required under national transposition measures for Articles 57, 61, 63, 63a and 66 of Directive 2006/48/EC” with a five year implementation period. The transitional provisions are the subject of on-going negotiation between the European Parliament (EP) and Council.

The capital base and capital requirements of the PCAR banks were assessed under PCAR and included in this assessment was forecast deductions for defined benefit pension deficits and subsequent capital filters under base and stress scenarios. The FMP report did not disclose details of the assumed levels of deduction for pension deficits. The focus on the PCAR was the forecast income, capital requirements and losses (particularly loan losses) in the three-year period.

The Central Bank included in the PCAR the forecast deduction for defined benefit pension deficits and subsequent capital filters under base and stress scenarios. In addition the Central Bank considered the implications of Basel III (namely CRD IV/ CRR). The PCAR tolerance levels and capital basis were set in accordance with the Central Bank’s definition of Core Tier 1 under the prevailing Capital Requirements Directive rules as at end-March 2011.

It is important to note, that the quality of capital in the Irish banking system has increased significantly as a result of lower tier capital buy backs and Government equity contributions. Whilst it is clear that the Basel III rules impose more conservative deductions than is currently the case, following a recapitalisation to levels determined by the 2011 PCAR, the FMP report stated that all four banks should comfortably meet Basel III Common Equity Tier 1 ratio on a phase-in basis under both the base case and stress case scenarios. The combined surplus to the minimum phase-in Common Equity Tier 1 under the PCAR base case under PCAR was estimated at the time as circa 13.3bn and 3.7bn under the stress case. Three of the banks would also meet the full 2019 minimum standard in the 2013 base case scenario.

*Deputy Pearse Doherty: To ask the Minister for Finance in respect of the €1.1billion top-up made by Allied Irish Banks to the group pension scheme in August 2012, if he will identify in the stress testing undertaken by the Central Bank of Ireland with Barclays Capital, BlackRock and the Boston Consulting Group in early 2011 which resulted in the publication of the Financial Measures Programme on 31st March 2011, where, in this work was the €1.1billion shortfall in the AIB pension fund examined or identified.