Even after the election, the Romney campaign still doesn’t get it. Mitt Romney’s 47% remark at a fundraiser haunted his campaign more than any other issue. Matched with similar remarks that he liked to “fire people” or that “corporations are people,” Romney constantly confronted the belief that he didn’t understand the problems of ordinary Americans. The Romney campaign could never overcome that obstacle. Now it appears that was because they didn’t really understand it.

Stuart Stevens, a top strategist for Romney, wrote in the Washington Post how wonderfully transformational the Romney campaign was. Stevens tries to present Romney as a dark horse for the nomination because the Republican Party elders never liked Romney and Romney trailed in the polls to about every Republican presidential candidate at one time or another.

Was Stevens in the same campaign that the rest of us remember? Romney was the favorite for the nomination from day one after the 2008 election. He raised far more money than his rivals and lead in the polls regularly. The only reason that the polls briefly gave candidates like Gingrich, Perry, Bachmann and Santorum boosts was disatisfaction with Romney. A disatisfaction in hindsight that that was well placed. Failing to seal the deal is hardly something to throw laurels at.

Stevens suggests that the selection of Paul Ryan was brilliant because it forever changed the way that America looked at Social Security and Medicare reform. He must be joking. Does anyone remember anything memorable that Ryan did in the campaign? That’s not to say Ryan was a poor choice. He just wasn’t a gamechanger.

Stevens points to Romney’s 8-point victory over Obama as proof that Ryan’s entitlement reform ideas went over well. Stevens should look at the 2008 demographics. John McCain carried senior by 8 points too. 2012 was a closer election. The numbers improved for the Republicans from McCain’s run in 2008. When a demographic doesn’t follow that trend, it takes a particularly strong dose of chutzpah to claim it as a victory.

None of that comes close to this piece from Stevens’ reflections:

On Nov. 6, Romney carried the majority of every economic group except those with less than $50,000 a year in household income. That means he carried the majority of middle-class voters. While John McCain lost white voters younger than 30 by 10 points, Romney won those voters by seven points, a 17-point shift. Obama received 4½ million fewer voters in 2012 than 2008, and Romney got more votes than McCain.

What can be assumed comfortably from the exit polls is that Romney lost the 47% that he decried by a comfortable margin. Those are Americans making significantly less than $50,000 a year. They are often the young and minorities. These are the very demographics that the Republican Party needs to expand and embrace if it is going to compete in future elections.

Yet Stevens dismisses all that in his proud declaration that Romney won the voters who really matter: the rich, old and white voters. I’m actually surprised that Stevens didn’t pound himself on the chest and declare Romney won the majority of the male vote too.

No wonder Romney never comprehended the image problem that he had with a majority of Americans. He had people like Stevens telling him that the important voters are those who dominated America’s past.

The Republican Party’s challenges are going to be more difficult than just rebranding. It has people like Stevens who are entrenched in the twentieth century thinking that they can still bring together the coalitions of Nixon and Reagan. Someone needs to tell them that the silent majority is no more.

Rich, older, white male voters are not going to dominate politics like they once did. Yet Stevens really thinks that Obama’s campaign was the aberration and the Democrats will not be able to replicate it.

There was a time not so long ago when the problems of the Democratic Party revolved around being too liberal and too dependent on minorities. Obama turned those problems into advantages and rode that strategy to victory. But he was a charismatic African American president with a billion dollars, no primary and media that often felt morally conflicted about being critical. How easy is that to replicate?

There is Stevens trying to make the argument that an African American candidate is nearly invicible, especially with a billion dollars in the bank and the media in his back pocket. If Stevens really believes that there is no racism left in America, then he is further delusional than I am imagining. Maybe he is. Take a look at his conclusions.

Yes, the Republican Party has problems, but as we go forward, let’s remember that any party that captures the majority of the middle class must be doing something right. When Mitt Romney stood on stage with President Obama, it wasn’t about television ads or whiz-bang turnout technologies, it was about fundamental Republican ideas vs. fundamental Democratic ideas. It was about lower taxes or higher taxes, less government or more government, more freedom or less freedom. And Republican ideals — Mitt Romney — carried the day.

Mitt Romney carried the day? Mitt Romney performed better than only four other Republican candidates in the last 15 elections. Stevens had better looked at the election results again. Romney received 47% and 206 electoral votes. He did not carry the day. He lost the election in what may be the last attempt to forge a coalition of the older, white and wealthier voters that Stevens admires. 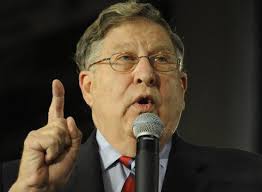 Douglas Brinkley, who wrote the Rolling Stone article, recalled an exchange with Obama and Rolling Stone executive editor Eric Bates, who said that his daughter told him to tell the president, “You can do it.”

Obama reportedly grinned. “You know, kids have good instincts,” he said. “They look at the other guy and say, ‘Well, that’s a bulls****er, I can tell.'”

White House Communications Director Dan Pfeiffer was asked about the comment Thursday in Richmond, Va., and said the issue was about Romney’s “trust.” He said people should “not be distracted by the word” but to “focus on the issue.”

Following Mitt Romney’s moderate shift in the first presidential debate in Denver, Obama and his allies have suggested that the former Massachusetts governor can’t be trusted. “So we know Governor Romney’s jobs plan doesn’t create jobs. His deficit plan doesn’t reduce the deficit. And we joke about ‘Romnesia,’ but all of this speaks to something that’s really important, and that is the issue of trust. There’s no more serious issue on a presidential campaign than trust. Trust matters,” Obama said Wednesday in Davenport, Iowa.

It’s not the first time that the president has used unvarnished language. He has called Kanye West a “jackass” but added the rapper is “talented.” Neither is he the first candidate to curse: then-candidate George W. Bush called New York Times reporter Adam Clymer a “major league asshole” over a hot mic, to which vice-presidential nominee Dick Cheney agreed.