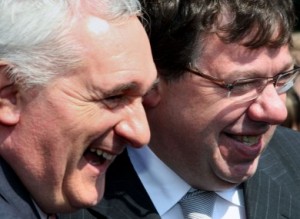 Taxpayers’ money is being paid out in pensions to approximately 100 former Ministers, many of whom have lucrative new jobs and positions despite their failings as public administrators.

Former Taoiseach Bertie Ahern receives the largest state pension of €152,331 for his service as minister and TD. Other former Taoisigh receiving pensions include Brian Cowen on €151,061; Albert Reynolds, who is getting €149,740 and John Bruton on €141,849.

Former Health Minister and Tánaiste Mary Harney, who is six years short of the normal retiring age, is paid an annual pension of €129,805.

Former Fine Gael Minister Alan Dukes, who is believed to be paid €150,000 as chairman of Anglo Irish Bank (now the Irish Bank Resolution Corporation) has a ministerial pension of €94,467.

Former Tánaiste Dick Spring has a ministerial pension of €121,108, on top of his basic salary of €27,375 and €3,000 for every committee meeting he attends as public interest director at the partly state- owned AIB.

A number of prominent members of the Bertie Ahern-led governments, including Charlie McCreevy, Dermot Ahern, Noel Dempsey and John O’Donoghue are all on pensions of over €119,000.

The Workers’ Party National Organiser, Seamus McDonagh, said: “The continued payment of these pensions to former ‘public servants’ while the most vulnerable are having their services cut is obscene. The amount that will be saved if a special levy is introduced to bring these pensions down to the standard state pension will not sort out the economy but will set a moral example.”

He added: “It is our understanding that special legalisation which would tax these pensions at a special high rate can be enacted, however the Government has claimed such a change would necessitate a constitutional referendum. If so, they should let the people vote on this issue.”

LookLeft will be contacting TDs in the coming weeks to ask them to state their position on the introduction of emergency legalisation to curtail these pension payments and will publish their responses. 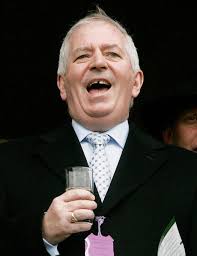 Laughing all the way to the bank

TWENTY-SIX former politicians who are earning pensions of more than €100,000 a year are escaping a super tax because of a legal loophole.

Another is former Fianna Fail minister Ray Burke, who was convicted of tax evasion.

The loophole arises because the higher rate applies only if a single pension is worth more than €100,000 but not if the politician is getting a number of pensions with a combined value above that level.

“It’s obviously unfair otherwise on the people who are paying it. The impression was given last year that it would be all office holders,” she said.

Ms Tuffy said she was in favour of a higher income tax on people earning over €100,000 in the forthcoming Budget rather than singling out former ministers again for heavier taxes.

Public Expenditure Minister Brendan Howlin has introduced an amendment to close the loophole by the end of the year.

It will allow the pension levy to be applied to all the combined pensions of a former office holder. A department spokeswoman said that all public bodies would be requested to supply the PPS numbers and pension payments of those with multiple pensions.

She said the department would then calculate the new higher pension levy and apply it.

Mr Howlin has said that the estimated savings for the new rate already was €400,000 per year — when the impact on retired judges, former semi-state chief executives and former secretaries-general is taken into account.

Mr Ahern and Mr Cowen are paying a total pension levy of around €11,000 each on their TDs‘ and ministerial pensions, leaving them with pensions of €111,235 each. But if their TDs’ pensions and ministers pensions were combined together, their pension levy bill would rise by up to €7,000 extra.

This is because they will only be able to claim one exemption from the public sector pension levy — rather than the present arrangement of one for each pension.

It means just six senior politicians are paying the super levy this year — which is in stark contrast to what was expected when it was announced by the Government last November.

At the time, Public Expenditure Minister Brendan Howlin said that “everyone had to burden-share” at a time of financial emergency.

Those paying the extra levy are former Taoisigh Bertie Ahern, Brian Cowen, Albert Reynolds and John Bruton, who all have ministerial pensions worth more than €100,000 even before their TD pensions are counted.

Former presidents Mary McAleese and Mary Robinson are also paying the new super levy on their presidential pensions. But former health minister Mary Harney is escaping the super levy because she has a TD’s pension of around €50,000 and a ministerial pension of €79,000.

Another in this category is former finance minister Charlie McCreevy, who has a TD’s pension of around €50,000 and a ministerial pension of €69,000.

These ministers do have to pay the public service pension levy, but not at the higher 20pc rate, which kicks in at €100,000.

The information on those being hit by the levy was supplied by the Department of Public Expenditure to Labour Dublin-Mid West TD Joanna Tuffy. She called for the closure of the loophole.