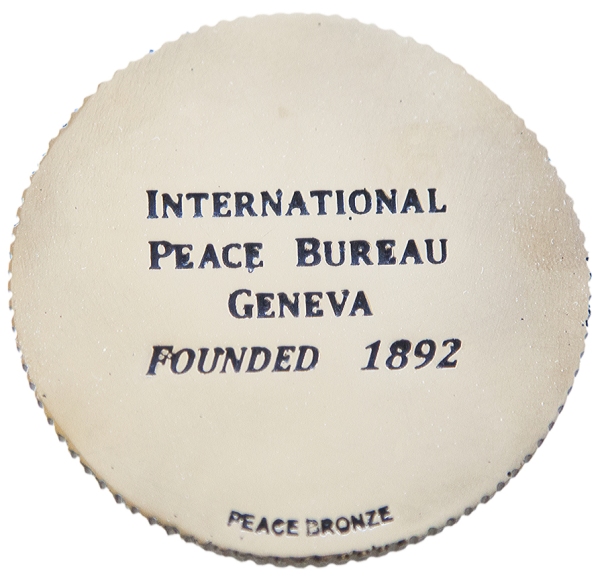 U.S. whistleblower and international hero Bradley Manning has just been awarded the 2013 Sean MacBride Peace Award by the International Peace Bureau, itself a former recipient of the Nobel Peace Prize, for which Manning is a nominee this year.

A petition supporting Manning for the Nobel Peace Prize has gathered 88,000 signatures, many of them with comments, and is aiming for 100,000 before delivering it to the Norwegian Nobel Committee in Oslo.  Anyone can sign and add their comments at ManningNobel.org

The International Peace Bureau (IPB) represents 320 organizations in 70 countries.  It was awarded the Nobel Peace Prize in 1910.  Over the years, 13 of IPB’s officers have been Nobel Peace laureates. See ipb.org

The Sean MacBride prize has been awarded each year since 1992 by the International Peace Bureau, founded in 1892. Previous winners include: Lina Ben Mhenni (Tunisian blogger) and Nawal El-Sadaawi (Egyptian author) – 2012, Jackie Cabasso (USA, 2008), Jayantha Dhanapala (Sri Lanka, 2007) and the Mayors of Hiroshima and Nagasaki (2006). It is named after Sean MacBride, a distinguished Irish statesman who shared the 1974 Nobel Peace Prize, and is given to individuals or organisations for their outstanding work for peace, disarmament and human rights.

The medal is made of “peace bronze,” a material created out of disarmed and recycled nuclear weapons systems, by fromwartopeace.com The prize will be formally awarded on Sept. 14 in Stockholm, at a special evening on whistleblowing, which forms part of the triennial gathering of the International Peace Bureau. See brochure at: PDF. 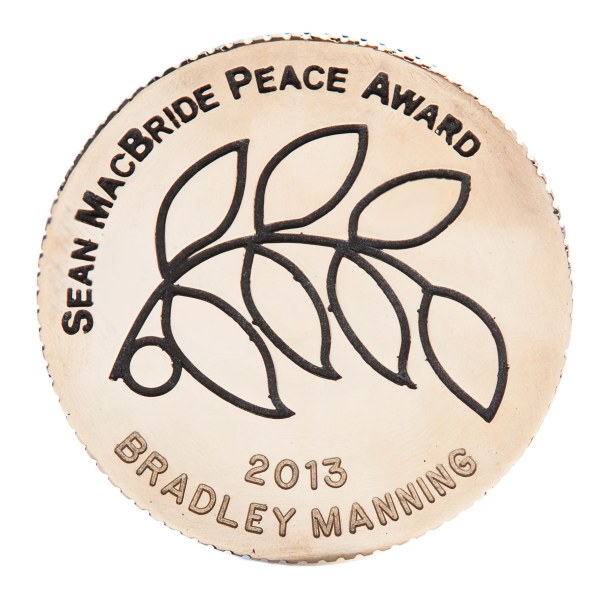 IPB’s Co-President Tomas Magnusson said, “IPB believes that among the very highest moral duties of a citizen is to make known war crimes and crimes against humanity. This is within the broad meaning of the Nuremberg Principles enunciated at the end of the Second World War. When Manning revealed to the world the crimes being committed by the U.S. military he did so as an act of obedience to this high moral duty. It is for this reason too that Manning has also been nominated for the Nobel Peace Prize. In more general terms it is well known that war operations, and especially illegal ones, are frequently conducted under the cover of secrecy. To penetrate this wall of secrecy by revealing information that should be accessible to all is an important contribution to the struggle against war, and acts as a challenge to the military system which dominates both the economy and society in today’s world. IPB believes that whistleblowers are vital in upholding democracies – especially in the area of defense and security. A heavy sentence for Manning would not only be unjust but would also have very negative effects on the right to freedom of expression which the U.S. claims to uphold.”

Nobel Peace Laureate Mairead Maguire recently wrote: “I have chosen to nominate U.S. Army Pfc Bradley Manning, for I can think of no one more deserving. His incredible disclosure of secret documents to Wikileaks helped end the Iraq War, and may have helped prevent further conflicts elsewhere.”

Maguire explains how far-reaching Manning’s impact has been: “While there is a legitimate and long-overdue movement for peace and non-violent reform in Syria, the worst acts of violence are being perpetrated by outside groups. Extremist groups from around the world have converged upon Syria, bent on turning this conflict into one of ideological hatred. In recent years this would have spelled an undeniable formula for United States intervention. However, the world has changed in the years since Manning’s whistleblowing — the Middle East especially. In Bahrain, Tunisia, Egypt, and now Turkey, advocates of democracy have joined together to fight against their own governments’ control of information, and used the free-flowing data of social media to help build enormously successful non-violent movements. Some activists of what has come to be known as the Arab Spring have even directly credited Bradley Manning, and the information he disclosed, as an inspiration for their struggles.

“. . . If not for whistleblower Bradley Manning, the world still might not know of how U.S. forces committed covert crimes in the name of spreading democracy in Iraq . . . Now, those who would support foreign intervention in the Middle East know that every action would be scrutinized under international human rights law. Clearly, this is for the best. International peacekeepers, as well as experts and civilians inside Syria, are nearly unanimous in their view that United States involvement would only worsen this conflict.”

Won’t you add your name to the petition now?

Mairead Maguire adds: “Around the world, Manning is hailed as a peacemaker and a hero. His nomination for the Nobel Peace Prize is a reflection of this. Yet at his home in America, Manning stands trial for charges of espionage and ‘aiding the enemy’. This should not be considered a refutation of his candidacy — rather, he is in good company. Burmese politician Aung San Suu Kyi and Chinese writer Liu Xiaobo were each awarded the prize in recent years while imprisoned by their home countries.” 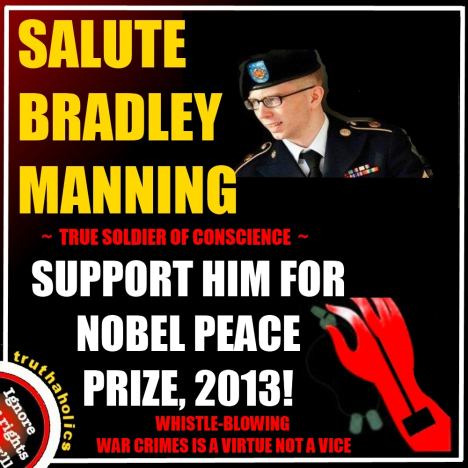 No individual has done more to push back against what Martin Luther King Jr. called “the madness of militarism” than Bradley Manning. The United States is the leading exporter of weapons and itself spends as much preparing for more wars as the rest of the world combined.  Manning is the leading actor in opposition to U.S. warmaking, and therefore militarism around the world.  What he has done has hurt the cause of violence in a number of other nations as well.

And right now, remaining in prison and facing relentless prosecution by the U.S. government, Manning is in need of the Nobel Peace Prize.

Alfred Nobel’s will left funding for a prize to be awarded to “the person who shall have done the most or the best work for fraternity between nations, for the abolition or reduction of standing armies and for the holding and promotion of peace congresses.”

The intent of the prize was to fund this work. As a result of enormous legal expenses, Bradley Manning is in need of that funding, unlike some other peace prize recipients.  In addition, his secret trial — with a potential death sentence — could use all the attention that can be shined on it.

The people of the United States and the rest of the world have learned more about the intentions of the U.S. government from Bradley Manning than from anyone else.  “Thanks to Manning’s alleged disclosures, we have a sense of what transpired in Iraq and Afghanistan.  We have an image of how Washington operates in the world,” author Chase Madar wrote in his book about Manning’s whistleblowing.

“Thanks to those revelations we now know just how our government leaned on the Vatican to quell opposition to the Iraq War. We now know how Washington pressured the German government to block the prosecution of CIA agents who kidnapped an innocent man, Khaled El-Masri, while he was on vacation. We know how our State Department lobbied hard to prevent a minimum wage increase in Haiti, the hemisphere’s poorest nation.”

Manning revealed a secret U.S. war in Yemen, U.S. records of massive civilian deaths in Iraq and Afghanistan, video of a U.S. helicopter attack on civilians and their rescuers in Baghdad, and facts about the corruption of numerous governments including those of the United States, Tunisia, and Egypt.  In those last two nations Manning’s revelations contributed to nonviolent pro-democracy movements.

Among the revelations made by Manning through WikiLeaks is the extent of time and energy the U.S. State Department puts into marketing U.S. weapons to the world’s governments.  We all have a better understanding of the work that is needed for peace as a result of this exposure of “diplomacy” as consisting so greatly of weapons selling.

The Guardian newspaper and BBC Arabic detailed last week how the United States armed and trained Iraqi police commando units that ran torture centers and death squads.  Maggie O’Kane, executive producer of the documentary, said: “I hope this film will be a legacy that actually says, ‘If you want to go to war, this is what war means. It means 14-year-old boys being hung up and tortured. It means men being turned on spits. And that’s called counter-insurgency. . . .’  This would not be coming to light if it hadn’t been for Bradley Manning.”

Not only has Manning done the most to resist militarism, but he has done it for its own sake, and not by chance or for any ulterior motive.  This is made clear by his recent statement in court and by his earlier communications in the chat logs that have long been a part of his case.   Manning was horrified by crimes and abuses.  He believed the public should know what was happening.  He believed democracy was more important than blind subservience in the name of a “democracy.”

Manning has been nominated for the Nobel Peace Prize by the Movement in the Icelandic Parliament, the Pirates of the EU; representatives from the Swedish Pirate Party, and the former Secretary of State in Tunisia for Sport & Youth.  The nomination states, in part:  “These revelations have fueled democratic uprisings around the world, including a democratic revolution in Tunisia. According to journalists, his alleged actions helped motivate the democratic Arab Spring movements, shed light on secret corporate influence on the foreign and domestic policies of European nations, and most recently contributed to the Obama Administration agreeing to withdraw all U.S. troops from the occupation in Iraq.”

The Norwegian Nobel Committee ( send them a note ) can either begin awarding the peace prize to opponents of war or continue on its current course — one which already has many questioning, not whether Manning is worthy of the prize, but whether the prize is worthy of Manning.

David Swanson’s books include ” War Is A Lie .” He blogs at http://davidswanson.org and http://warisacrime.org and works for http://rootsaction.org . He hosts Talk Nation Radio . Follow him on Twitter: @davidcnswanson and FaceBook .