Revenue judgement: Only efficient when dealing with the peasants

Revenue chairwoman Josephine Feehily has left citizens in no doubt whatsoever about how her organisation will deal with anybody who is tempted to dodge the upcoming property tax.

Revenue will ruthlessly bring to bear the full arsenal of laws at its disposal to enforce the new tax.

If necessary Revenue will deduct the tax directly from the salary, pension or bank accounts of those who fail to co-operate.

People can only judge for themselves Revenue’s record for pursuing people…We have very extensive data. We will pursue. We’ve done it in the past.

Well I’d like to accept Ms. Feehily’s invitation and judge her organisation’s record of pursuing people.

A report in last Sunday’s Independent reveals that not one person has been prosecuted over the Ansbacher tax criminality.

Excuse one: A lack of original documentation.

This excuse is, of course, bullshit. There is a mountain of good quality evidence available to Revenue if it had a mind to prosecute.

The reason this good quality evidence has never been used is simple – it would most likely result in damaging the interests of very influential and powerful people.

While many cases passed the serious evasion test to be considered for prosecution, the time elapsed – typically in excess of 10 years since the alleged offence occurred – meant it would not be possible to mount a successful prosecution.

The ‘time lapsed’ excuse is the most powerful strategy employed by state agencies when it comes to protecting influential and powerful people.

It is no accident, in my opinion, that almost every major white-collar scandal is strung out over many years in order to benefit from the ‘time lapse’ excuse.

Excuse three: Some of the criminals were too old or too dead.

Being too old will not be accepted as an excuse by Revenue for failing to pay the property tax. This excuse is strictly reserved for influential and powerful people.

Neither will death be accepted as an excuse. If an ordinary citizen undervalues his property and the property is sold on after his death the tax due, with interest, will be extracted from the new owners.

Influential and powerful people are exempt from such exacting laws. For example, when the criminal politician Haughey died his wealth was passed on to his family with no response from Revenue.

In functional democracies such ill-gotten wealth is heavily taxed or even seized outright.

Returning to Ms. Feehily’s invitation to people to judge Revenue’s record of pursuing people I think the following sums up what most ordinary people think.

The very fact that so called law enforcement agencies like Revenue and the Financial Regulator are incapable or unwilling to enforce the law when dealing with white-collar crime but are more than efficient in enforcing the law against ordinary citizens suggests that there is indeed one law for the rich and another for the peasants.

Kenny refuses to identify Ministers who get tax break

The identity of the 13 Ministers availing of a tax break for a second home in Dublin has been demanded by Sinn Féin finance spokesman Pearse Doherty.

He asked Taoiseach Enda Kenny if he was availing of it. “Who among his ministerial colleagues is availing of it?” he added. “How can he justify it to people at home who fear the introduction of the Government’s property tax on their family home when 13 of his Cabinet colleagues are writing off against their income tax bill the cost of a second home in Dublin?”

Mr Doherty said the tax break or “the dual abode allowance” was exclusively for Ministers and officeholders.

Those from outside Dublin, he added, were allowed to write off €6,500 against their income tax bill if they had a second home in the capital without having to provide a single receipt. If they did not have a second home in Dublin and stayed in a hotel, they could write off against their income tax bill €3,500 for having their laundry done and without having to give a receipt.

“When the Taoiseach was in opposition and Deputy Micheál Martin and his gang were availing of this lavish tax break, he promised to abolish it,” Mr Doherty added. “Since he has taken office, far from abolishing it, we have seen the cost increase by 30 per cent to €112,000.”

He said most Ministers were in Dublin four or five nights a week, depending on their schedule or duties. “The matters mentioned by the deputy are part of what the Government is considering in respect of the budget which, as he is aware, will be presented by the Minister for Finance next week,” he added.

Mr Doherty said Ministers must write to the Revenue Commissioners to ask that their income tax bill would be written down up to €6,500 in unvouched expenses. The Minister’s solicitor’s and auctioneer’s fees would be written off against tax.

“How many Ministers have availed of the €3,500 deduction for the purposes of having their laundry done because they stay in a hotel or a guesthouse?” he added.

Mr Kenny replied: “Ministers are entitled to an allowance of €6,000 which they can claim at the 41 per cent tax rate, which works out at approximately €3,500.

As a rural member, the deputy is in a position to claim approximately €30,000 or more.” 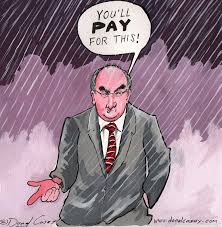 LOCAL AUTHORITIES will in time be given powers to set their own property tax rates in order to generate funds to support provision of services in their areas, Minister for the Environment Phil Hogan has said.

The development, announced by the Minister at the publication of a programme of local government reform, would give county councillors power to set the tax at a level that meets financial needs. This was the case under the domestic rates system that was abolished in 1977.

“Property tax will become more and more the source of income for local authority services to be funded,” said Mr Hogan. “If they are raising the money locally for service provision, they will have a say in how they spend it. Each local authority can have a different level of property tax in due course. The timing of that is a matter for Government.”

The tax, expected to be levied at an initial rate of 0.25 per cent of the property value, is to be announced in the December 6th budget and is likely to come into force in the middle of next year. The details of the levy, which is to be collected by the Revenue Commissioners, are yet to be approved by Cabinet.

Mr Hogan was speaking at the publication of Putting People First, a programme of local government reform which he said represented the most radical changes to local political structures since the 19th century.

The abolition of 80 town councils, a reduction in the number of local authorities to 31, and a proposal to reduce the number of elected councillors by 42 per cent to a maximum of 950, are among the measures set out in the plan.

It indicates that the role of elected councils should be extended to cover matters such as local economic development and the support of businesses. But it also states that the power of councillors to overturn the decisions of planning officials should be removed. Many of the changes outlined in the plan are to be in place for the 2014 local elections.