Sweden: A Cautionary Tale About Vaccines

In 2009, the swine flu hit Europe in pandemic levels.

The countries rushed to acquire a vaccine called Pandemrix, made by GlaxoSmithKline in the UK.

The vaccine had been fast-tracked for use due to the human swine flu crisis.

One wealthy nation, Sweden, snapped up a large amount of the Pandemrix vaccine and launched a nationwide campaign, eventually vaccinating 59% of the population against the swine flu.

This may sound familiar — the vaccine was promoted by national health organizations, the main stream news, schools, workplaces and on television to encourage everyone to get the jab.

And these children had one thing in common: they had been injected with the Pandemrix vaccine.

More than 800 children across Europe have been diagnosed with this incurable neurological disorder and the evidence is overwhelming in the implication of the vaccine.

The drug contained squalene which was used as an adjuvant.

Squalene is the most likely culprit in the vaccine. (Source)

The Tragic Story of Emelie

One young girl, Emelie Olsson, has had her life forever devastated as a result of narcolepsy, the onset of which occurred after receiving the swine flu vaccine in 2009.

The 14 year old girl has had her life devastated.

She cannot sleep at night.

When she does sleep, she is plagued with nightmares and hallucinations, sometimes waking more than 70 times in the night.

Sometimes when she wakens she is completely paralyzed and unable to breathe well or call out for help.

During the day, she can hardly keep her eyes open because of the lack of sleep.

If she laughs she has something called a cataplexy — when a strong emotion causes sudden muscle weakness that leaves her unable to stand.

When Emelie tries to have fun with friends, the happiness, literally, causes her to collapse to the ground.

She said in an interview:

”I can’t laugh or joke about with my friends anymore, because when I do I get cataplexies and collapse.

I can not laugh anymore and it makes me very, very sad.

It is the worst of all.”

Can you honestly imagine, as a parent, an adult or a human being, having to warn a child — “Stop that!  Don’t laugh!!!!” 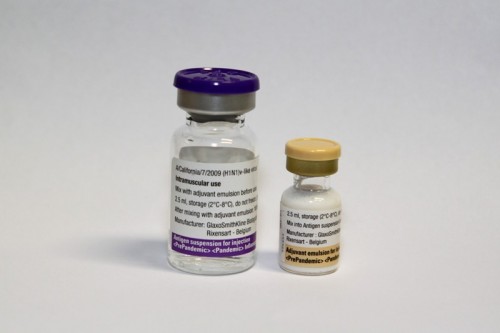 But Emelie’s mother has to do just that.

In an interview, Marie Olsson expressed terrible guilt and regret.   (translated from Swedish)

We are parents supposed to protect our children and instead I have asked Emelie take this vaccination, which has made her so sick.

If I had read on better and questioned more then maybe she had not been vaccinated themselves.

Before then, Emelie had been healthy.”

Emelie, age 14, must now take stimulants during the day, narcotic sleep aids at night and medications that stabilise her emotions so that she can feel neither sadness or joy.

She must take these medications for the rest of her life.

Emelie’s struggle is outlined in the documentary “After the Syringe.”

Lest the pro-vaccine crown think that Emelie’s story is merely anecdotal, there is enough evidence to support claims that GSK’s toxic concoction caused the 800 reported cases of narcolepsy to convince experts like Emmanuel Mignot, of Stanford University, who one of the world’s leading experts on narcolepsy.

”There’s no doubt in my mind whatsoever that Pandemrix increased the occurrence of narcolepsy onset in children in some countries — and probably in most countries.”

Europe’s regulatory board, the European Medicines Agency, has now directed that the vaccine should not be given to anyone under the age of 20.

One public health official in Sweden has gone on the record stating that things should have been different.

Goran Stiernstedt, the director for health and social care at the Swedish Association of Local Authorities and Regions, was at the helm of the vaccination campaign across Sweden.

He estimates the vaccine may have saved the lives of 30-60 people, but now over 200 recipients suffer from narcolepsy. (source)

“The big question is was it worth it?

And retrospectively I have to say it was not…

This is a medical tragedy…

Hundreds of young people have had their lives almost destroyed.”

Some experts say the risk is still worthwhile.

David Salisbury, the UK’s director of immunization, seems to think that the quality of life of 800 children is a small price to pay.

“In the event of a severe pandemic, the risk of death is far higher than the risk of narcolepsy.

If we spent longer developing and testing the vaccine on very large numbers of people and waited to see whether any of them developed narcolepsy, much of the population might be dead.”

Salisbury, of course, is neck-deep in his involvement with the very ethically questionable World Health Organization.

He has served as the Chairman of WGO Strategic Advisory Group of Experts (SAGE) on vaccines, and as a member of WHO’s Global Advisory Committee on Vaccine Safety.

He is the Co-chairman of the Influenza Pandemic Preparedness Group for the Global Health Security Action Group of G7 countries.

Indeed, his pro-vaccine interest in the “greater good” far outweighs his concern about the risks to children like Emelie.

No one seems willing to take responsibility for the lifelong damages suffered by these children.

Sweden gave GSK indemnity when they purchased the drug, which means that those affected by the vaccine cannot ask for damages from the manufacturer.

To receive compensation, the state is asking parents to

”…forever renounce the right to ask anyone to account in court for what has happened.

The condition has no counterpart in any other type of insurance, and only have the task of protecting drug manufacturers from lawsuits.”

We can never write such a thing.

We parents requiring instead that:

The state clearly take responsibility for our children’s future, and ensure that our children receive full compensation for economic losses without limiting insurance.

All the vaccine itself and then got narcolepsy should be entitled to compensation — without having to fight for it against the insurer.

The state ran a vaccination campaign that gave our children a life-long severe illness.

Now, the state must also take responsibility for the consequences.  (Source)

One health official in Norway has called the Pandermix tragedy a medical catastrophe.

“Narcolepsy following Pandemrix [vaccination] was completely unexpected and surprising, and a catastrophe.

Preben Aavitsland, who was responsible for monitoring contagious diseases at Norway’s Institute of Public Health in 2009 when the Swine Flu hit, cited studies in Finland, Sweden and here.

He told NRK these concluded that children given the Pandemrix vaccine had a 10 times-higher risk of developing narcolepsy than adults, calculations he states that Norwegian experts had not carried out. ” (Source)

Despite these statistics, there is still a push for the influenza vaccine in the Scandinavian countries.

“The Institute of Public Health declares the current flu vaccine is not the same as the Pandemrix vaccine and urges that those in risk groups such as those over the age of 65 or suffering from other health problems consider vaccination.” (Source)

What Can We Learn from This?

There are a few take-home lessons from this tale:

First of all, something vastly under-tested was brought to the market.

That vaccine was not merely made available, it was pushed, promoted and practically forced on people using a campaign of fear and guilt.

Children have been forever damaged by this vaccine.

No one wants to take financial responsibility for a life sentence of mental suffering, expensive daily medications and serious health issues.

Officials know these things are true but want you to continue to be vaccinated (and have your children vaccinated) anyway.

This story is a cautionary tale.

It tells us (and simply reaffirms for many of us) that we cannot accept anything that Big Pharma and their cohorts at the FDA and the CDC tell us.

If they lied to people in Europe can we really think they are telling us the truth in the United States and Canada?

We cannot accept what the media tells us at face value — who do you think sponsors the news programs?

Pay attention to the ads — you’ll see commercials for over the counter medications, SSRI antidepressants and other Big Pharma goodies interspersed throughout.

Whether the goal is to line their own pockets, to control the masses or to depopulate, this illustrates that our children are seen as nothing more than human laboratory animals.

These medications that are brought to market and all but forced on us are just a big science experiment.

The mind control and brainwashing by the mainstream culture is a psychological game, convincing people that it’s all for their own good.

You can turn on the TV right now and flip through a few channels and see the identical agenda at work in North America, where nearly every newscast mentions at least once during the 30 minute program, where, how or why you should rush out, roll up your sleeve, and get your flu shot.

What happened in Sweden is a direct example of what is going on, RIGHT NOW, across the western world, regarding the flu shot.

The tragedy that has afflicted these families could easily occur here.

If you can’t see the correlation between the two, your eyes and mind are willfully closed.