The United Arab Emirates (UAE) are best known for oil and gas, but the region is also home to interesting developments in renewable energy. The Shams Power Company has just inaugurated the Shams 1 concentrated solar power (CSP) station, which, with a capacity of 100 MW, is the biggest operating solar power station in the world. It makes sense when you think about it: They have lots of sun, and lots of money…

Shams 1 uses 258,048 parabolic mirrors to collect sunlight and concentrate it onto oil that flows through a tubing at the center of the curved mirrors. This heated oil makes its way into a heat exchanger and is then used to create steam that powers turbines, thus making electricity.

The plant uses Abengoa Solar’s ASTRO (Abengoa Solar Trough) parabolic trough collectors. The ASTRO collector is based on the 150m-long EuroTrough collector, which represents an improvement on the Luz collectors used in the SEGS CSP plants in California. ASTRO benefits from reduced weight and therefore reduced cost, while still delivering proven performance (established through EuroTrough tests conducted since 1998 at Plataforma Solar Almeria).

The ASTRO collector features an improved structural design, with a torque box that increases stiffness and reduces torsion and glass breakage. The EuroTrough collector design is used in most Spanish parabolic trough projects, including the commercial-scale Solnova and Andasol plants. 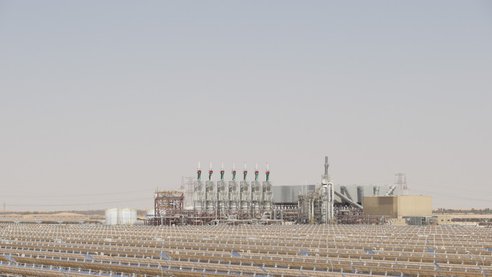 Of course, any natural gas that isn’t being burned in the UAE to generate electricity is likely to be exported elsewhere, but the UAE isn’t the only one to blame for that. While fossil fuel suppliers have done all kinds of things to stifle cleaner competition and extract subsidies for their industry, the demand side is also to be. Most people use a lot of fossil fuels directly, and indirectly to make and transport the things they buy. To kill demand we need to build alternatives such as this solar power plant.

One way to turbo-charge progress would be a carbon tax (and all money raised by it could be used to cut other taxes, such as income and payroll — let’s tax bad things rather than good ones); it would redirect so much money into renewables that we’d get to a clean power grid much faster. If we can’t do that, we should at the very least eliminate subsidies (direct and indirect) for fossil fuels….